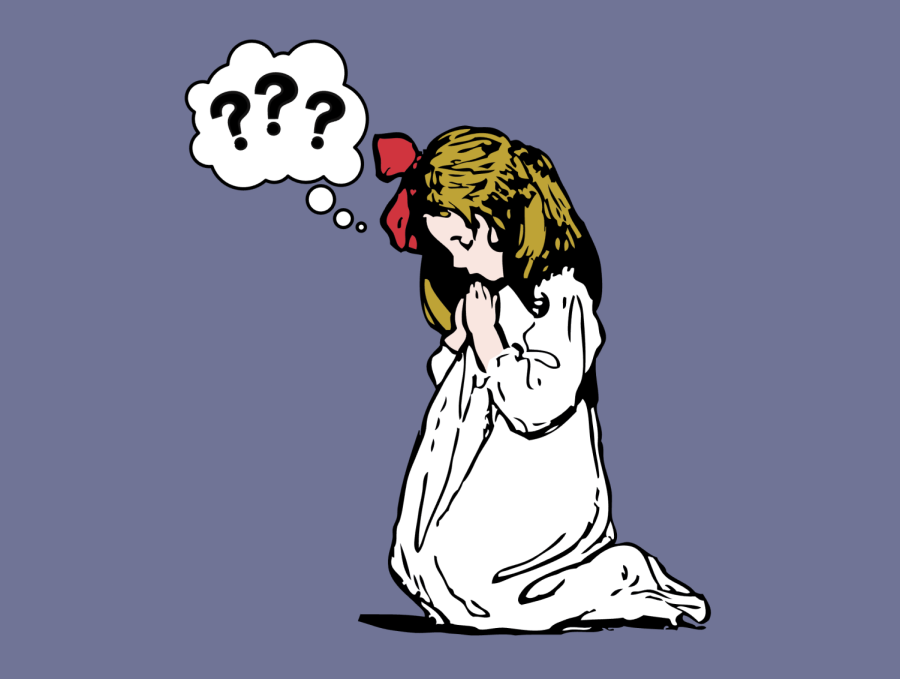 WSPN's Delia Caulfield reflects on her experiences with Catholicism and her struggle with accepting it in its entirety.

Throughout my life, I’ve experienced the ups and downs of religion, never truly being able to decipher where the line stood between facts and speculation. I’ve queried, doubted and even surrendered to my disdain towards certain policies the Church stood for that I could never grow to accept.

I live in an Irish-Catholic household, and family has always been the glue that mended me and religion together. Despite my doubts, the Church has always been there for me in times of grief. I’ve lost important people in my life, and although it was heartbreaking, religion was the solution. The idea of life after death or heaven has always comforted me; knowing in my heart that although these individuals weren’t here with me on earth, they didn’t cease to exist.

Growing up, my faith was something that seemed a bit forced, but not necessarily in a bad way. Every Sunday, my parents would drag my siblings and I out of bed, make us throw on whatever dress clothes that were clean in our closets and pile into my mom’s SUV. We would then hustle to our church and feel lucky if we made it even five minutes after mass had begun. It felt like a chore, but it was a routine, and one that I was never quite able to break.

This was until my siblings and I discovered sports. So, instead of throwing on my bright pink skirt at 10 a.m. on Sunday, I’d be lacing up my basketball shoes. Soon enough, my attendance at mass slowly decreased to every other week, to every three weeks and sometimes, I’d even go a month or two without stepping foot in a pew. This was fine with me, as I enjoyed kicking a soccer ball into the net or dribbling a basketball up the court much more than I enjoyed kneeling during prayer. However, I was naive to push my faith to the side rather than trying to face it head on.

The truth is, my relationship with my faith has always been rocky, having more bad times than good. It’s been difficult for me to wholeheartedly embrace the teachings of my religion when I disagree with many of the issues that the Church strongly stands for. As a result, I felt myself slowly slipping away from the idea of religion itself and starting to view the Church simply based on the policies it stands for.

Instead of openly questioning religion, I hid. Letting my stubbornness take over, I refused to do anything that would even remotely resemble support of the teachings of the Church. I wanted to completely disassociate myself with a religion whose beliefs I didn’t support.

Looking back, this was the worst possible decision. Isolating myself from religion only emphasized what I was trying my hardest to conceal: that I was afraid. I was frightened that I would be judged based on my spirituality instead of my personality. The pressure to either conform to the unideal standards that I strongly opposed or completely abandon religion constantly loomed over me, and it was a massive indicator of stress in my life.

I was envious of those who could accept faith wholeheartedly and completely devote themselves to God. It felt like something was wrong with me because I could never quite push away my hesitation and fully commit myself to all of Catholicism. I would watch members of my church community nod their heads in agreement following each line of the priest’s sermon, expressing their agreement for each and every preaching.

I couldn’t comprehend where I was going wrong and on many days, I felt like a disgrace, knowing I could never automatically accept every teaching like everyone else.

I tried everything to mend a relationship with the Church. I started going to mass more often, I was an avid participant in my CCD classes and I prayed in every spare moment I had. I was so busy trying to prove myself to my family, church community and well, God. I had exhausted myself. I was so focused on being the epitome of the perfect Catholic girl that I lost track of why I was religious in the first place. I realized that no matter how many prayers I said in a day, it could never fill the immense gap of doubt in my spirituality.

The decision to truly put others’ preconceived notions behind is easier said than done, and it takes more courage than anticipated. However, at the end of the day, how I go about my faith is my choice, so why was I allowing outside critics dictate my beliefs?

Ultimately, this curse turned out to be a blessing. For now, I realize ignorance is the biggest fault one can have in regards to religion. In everyday life, whether it’s a person or a set of rules, it’s rare and often blasphemous to agree with everything. It’s simply human nature to question society and to rebut against policies that you don’t agree with. This is the reason changes have been made in the world, because someone wasn’t afraid to acknowledge that the world isn’t perfect, no matter how much we pretend that it is.

The truth of the matter is that faith is never perfect, and neither am I. So, why do so many people pretend it is? Accepting anything without reason, whether it be religion or not, is vastly dangerous, and it has serious repercussions behind it.

Whether you are religious or not, don’t be afraid to question. Because sitting back and blindly agreeing with everything is far more harmful than admitting to yourself that perfection is impossible to achieve.