Hunter Harris: Weightlifting helps me to learn from my mistakes 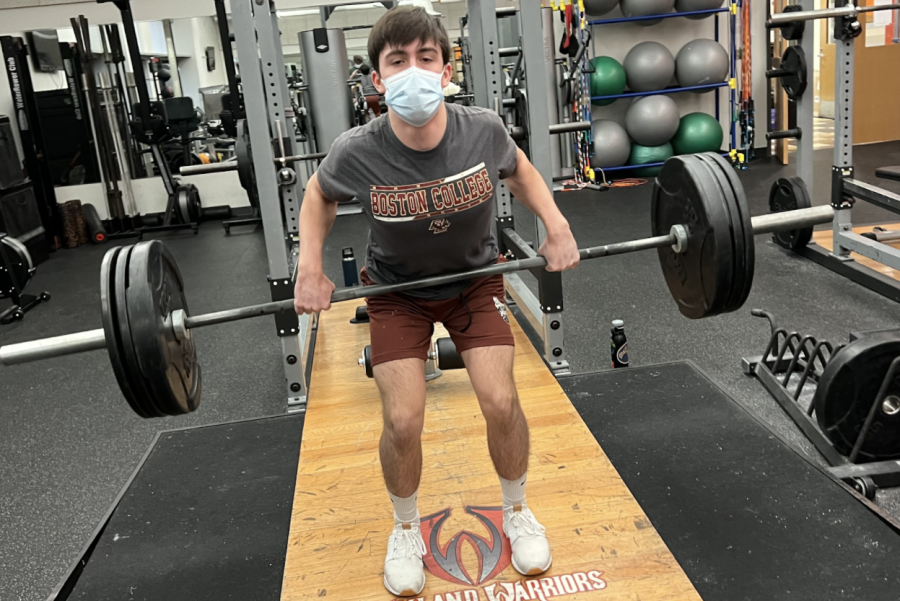 Junior Hunter Harris exercises during a Weightlifting Club meeting in the weight room. "I started [Weightlifting Club] to be a friendly face in the gym and to help others that are also trying to get into lifting," Harris said.

It’s 6:30 a.m. on a Monday. The morning sun still hides behind the horizon, and the school day is a whole two hours away. A few custodians and teachers trickle into the mostly empty building. However, one room is already buzzing with activity: the WHS weight room. Junior Hunter Harris is among these early risers, eager to start his day with a workout.

Harris’ commitment to fitness started a few months ago, before the 2021 baseball season. Inspired by friends, Harris decided to start a new hobby.

“Ethan [Brandeleone] showed me some lifts, and I did [them] in preparation for baseball,” Harris said. “Getting bigger would help me get some playing time on varsity.”

Harris quickly realized the many positive outcomes of weightlifting in his baseball performance.

“I felt a difference, and it’s continually helping me drive the ball,” Harris said.

Harris’ payoffs didn’t stop there, though. Harris saw the results of his work off the baseball field as well.

“I enjoy lifting with others, and I personally like the self improvement aspect,” Harris said. “It helps me become fit.”

A few months into his journey, Harris expanded his hobby into a club. Along with juniors Marcos Whelton, Declan Murphy and Ethan Brandeleone, Harris introduced Weightlifting Club at the club fair earlier this year.

“I started [Weightlifting Club] to be a friendly face in the gym and to help others that are also trying to get into lifting,” Harris said. “As I saw its effects on me, I thought it could help many others.”

The club met success at the club fair, and its membership has sustained throughout the past months.

“I was surprised by the outcome of how many people showed up,” Harris said. “I thought there wouldn’t be too many, but there’s 10 plus people everyday.”

Harris has been able to impart the positive effects he experienced onto his club members.

“There’s a fair amount of people coming in from all grades who enjoy lifting and some of them are aiming to make varsity spots,” Harris said. “It’s really helping them.”

“I know there [are] some who don’t enjoy getting up [early,] but I personally don’t find it too bad as I’ve gotten into a routine,” Harris said.

A high intensity activity like weightlifting also comes with some aspect of danger, but Harris is careful to avoid these possibilities by exercising proper form.

“Most of my [injuries] are from overuse,” Harris said. “With weightlifting there comes the risk of injury, but if you do the proper lifts you can avoid some of the risks.”

Through his club, Harris has discovered a community of role models and leaders.

“Instead of focusing on themselves [in Weightlifting Club, weightlifters] lend their time to others and try to help them along their journey,” Harris said.

To Harris, weightlifting isn’t just a fun pastime but a way to discover things about himself.

“Weightlifting helps me to learn from my mistakes.” Harris said.