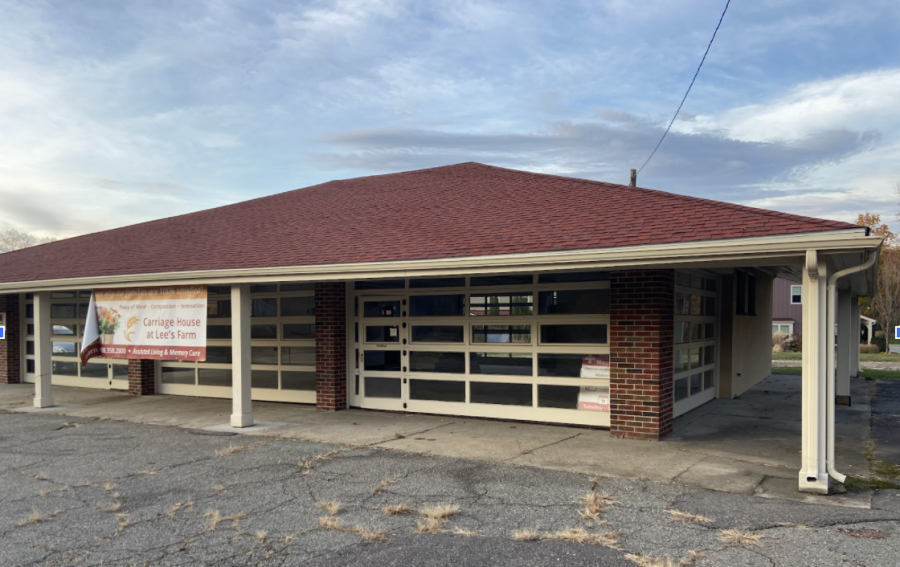 The lot where Lee's Farm Stand used to reside. The structure that used to house the market is now empty. The structure has been preserved during its inactive period and will be now fully renovated and transformed into the new farm stand.

Show almost any long term Wayland citizen the sign scripted with “Lee’s Farm Market,” and they would instantly be able to tell you its location in town. This sign stands in a small vacant lot with a shack, empty except for a counter. Why would this sign be posted on an empty lot? Especially on Boston Post Road, one of Wayland’s busiest streets?

A few years ago, Lee’s Farm Stand blossomed with fresh produce and flowers. Since owners Anthony and Nancy Bongiornio opened it in 1956, Wayland residents have counted the stand as a beloved local landmark. Community members from all around town depended on the offered goods—the stand seasonally pedaled flowers, herbs, berries, nuts and honey and sold locally sourced meat and vegetables year round—which were much fresher than equivalent products at the grocery store. The stand was also important to residents of Wayland for its open farm space on busy Route 20: it contributed to the rural, community atmosphere of Wayland.

After 47 years of sales, however, the Bongiornio family decided to close Lee’s Farm Stand and sell the property in 2003. Their search for a buyer brought on a multitude of offers. Some proposed projects including a strip mall and a home for the elderly.

In 2007, a community group entered the conversation, searching for a way to maintain this site for its presence in the community. The LEES (Let’s Encourage Environmental Sustainability) group chose to pair with another local community focused group, the Pinebrook Association, and attempted to save the farm stand in 2007 and again in 2011. Now inactive, both groups were largely focused on ensuring that Wayland remained a rural, community based town with a lesser focus on big business. Speaking on behalf of her group, one former leader of LEES, Joan Blair, expressed that Lee’s Farm Stand added to this atmosphere in an essential way.

“A group of us were very concerned about… how inappropriate that would be for Wayland to have a strip mall here on Route 20,” Blair said.

With these opinions in mind, the groups set out to find a way to satisfy the sellers and be an appropriate fit for Route 20 and for Wayland. The groups were faced with the problem of who would operate the stand. While they were interested in maintaining its stance in the town, they did not know at that point who would be the one to run it. They decided to turn their efforts elsewhere, resulting in the building of the current settlement in the area, an assisted living center. This came with much discussion within Wayland’s boards as to what would maintain little traffic in the area while still putting to use a good area of land. Through this, the Carriage House was established in 2014 and many were at least temporarily satisfied with the conclusion.

Now, 11 years later, the building where Lee’s Farm Stand once thrived is sought after once again. This time around, the group Farm Stand Acquisition LLC wants to direct a rebirth of Lee’s Farm Stand. The company approached Wayland’s planning board Oct. 28, 2021, with intent to begin action on the stand.

Members of the community fear the proposal might be just another plan of action that ends up in the gutter. Blair expressed her concern for the amount of work this project would take. While she is largely in favor, she worries the directors of the project will find themselves in too deep.

“If they start something, and they can’t continue with it, that would be too bad,” Blair said. “When you think about what they may run into, I think you have to enter into this with the idea of ‘it might not work, but if it does, it will be there forever.’”

Blair said that in her experience, it is quite challenging to get everything required to even suggest something for such a project. She finds it very admirable of them to have organized everything needed but is worried that with so many challenges in their way, the great project will be cast aside again.

Project Manager Russell Burke was tasked with meeting with Wayland’s planning board in representation of Farm Stand Acquisition. He used this time to request a start before approval on the project to commence building and managing.

“What we’re concerned about is that we are taking a site that has no circulation, no pavement and no parking, and we’re proposing to start laying out all of the amenities,” Burke said. “We’re dead in the water if we can’t get a lot of [the excavation] done before the frost comes.”

Members of the Planning Board shared some of Blair’s worries. With many unknowns left unresolved, the future of the excavation seemed uncertain before it had even been approved. These are largely focused on the response of stormwater drainage and runoff due to the project. With many new changes in conditions for the land in planting, water sourcing for the stand and uses for the barn, it was difficult to determine what flooding could follow. Planning Board members expressed apprehension about the suggested pace of the project and the ensuing conditions.

“Other uses contemplated for the property include activities designed to market to and bring the public to a farm for farm related educational experience by displaying a combination of the farm setting and products of the farming operation, with the ultimate goal to encourage the purchase of agriculture products,” Farm Stand Acquisition’s application to the Planning Board reads.

They plan to partner with Sensational Teens for the Entrepreneurial Mentorship of Students (STEMS), founded by Wayland High School graduates for the bulk of the project. The goal of this aims to encourage early entrepreneurism in teenagers. With many plans behind the business, it seems like an apt area to put students behind and watch it all lay out in front of them. STEMS has plans to use all of the area behind the farm stand for growing fresh flowers to be sold at the farm stand.

STEMS has reached out to families in the town to see if their high school aged students would be interested to apply to join. They offer positions in gardening itself as well as more business focused contributions. This targets teenagers of Wayland with any future plans to venture into marketing, accounting, agriculture and even social media endeavors.

Thankfully for STEMS, the Wayland Planning Board voted on Dec. 10, 2021, in approval of Farm Stand Acquisition’s proposal. This comes with the assurance of certain conditions. These are listed in detail in the site plan decision with five general conditions and seven site specific conditions.

Ergo, Farm Stand Acquisition LLC and the STEMS team’s work is far from over. But with an approval safely secured, Wayland residents can look forward to the rebloom of Lee’s Farm Stand, coming soon.