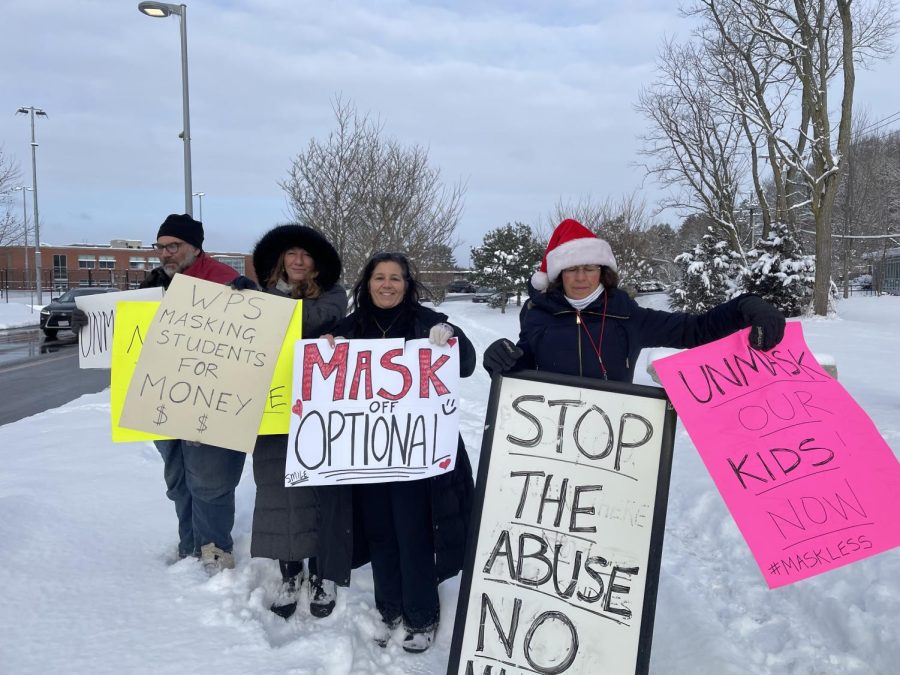 Protestors assemble outside Wayland High School the morning of Monday, Feb. 14. "We feel that everyone should be able to make their own choice and decide what is medically best for them," one anonymous protestor said.

As students arrived to school around 8:15 a.m. this morning, Feb. 14, they were greeted with neon signs demanding to “unmask our kids now.” Standing on the corner of the Wayland High School entrance, a group of four protestors held their signs proudly.

“[The protest is] to make people aware of why you’re wearing a mask, which is for money,” protestor Charlotte Tirm said. “It has nothing to do with your health.”

The protestors demanded an end to the mask mandate, which they believe has been extended for too long. They have expressed their concerns to the WHS School Committee, who decided that they would revisit the matter for Mar. 7.

“We went to the school board meeting on Wednesday night, and they’re talking about extending it,” Tirm said.

With signs reading: “WPS Masking Students for Money,” protestors claim that the mandate is being extended because funding depends on upholding COVID-19 protocols.

“If you enforce COVID-19 protocols, you get extra money,” Tirm said. “We’re talking millions of dollars.”

As they stood on the corner, some passing cars honked in support of their demonstration. They cheered back.

Protestors believe that wearing masks is detrimental to students well-being.

“No one’s talking about the psychological damage that’s happened to the teens with the suicide, the anxiety,” the anonymous protestor said. “I mean, the rates have skyrocketed.”

Protestors outside the school are in connection with a demonstration at WHS on Friday, in which students entered school without masks. They aim to involve more students in their movement.