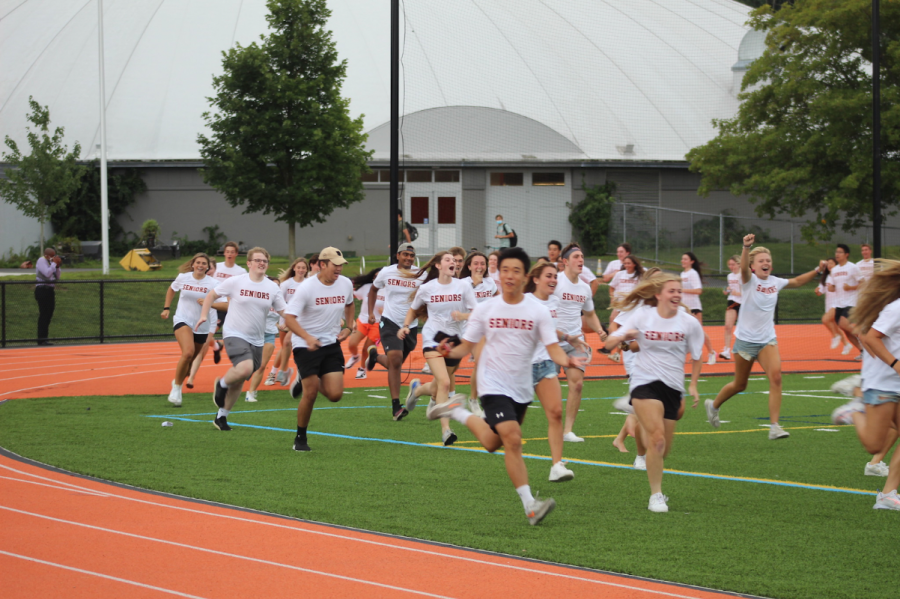 On the first day of school, seniors rush onto the turf in their senior shirts. It’s a tradition for seniors to make an entrance to the rest of the school every year. Although this is a tradition that has been going on for years now, many other traditions have changed over the years.

The countdown has begun for the class of 2022, with mere weeks left until the seniors’ final day walking down the WHS halls. It won’t be long until they leave the title “high schooler” behind and go their separate ways. Over the years, popular traditions such as the Powderpuff football game, the Senior Show and Hill Night have changed or been eliminated. With the different directions every senior will go, many believe classwide traditions are more important than ever.

Powderpuff:
Powderpuff was a chance for Wayland’s senior girls to face off Weston’s senior girls in a flag football game. The girls spent weeks training and practicing with senior boys on the football team. It’s something that girls look forward to from a young age. A true team sport where fun meets competitiveness in an effort for Wayland girls to beat their football rivals. No one thought that the tradition would be canceled after years of it occurring, until it was.

“It was always something I looked forward to,” junior Piper Cinti said. “It was a chance for the girls in my grade to work together, so I’m disappointed it likely won’t be happening next year.”

Why was the beloved tradition canceled? Principal Mizoguchi, along with fellow coworkers, decided that the game was building an unhealthy rivalry between Wayland and Weston – something the two towns didn’t need. There were also safety concerns regarding injuries players received while playing in the game.

The class of 2022 performed in their Senior Show, a night for the grade to get on stage and make each other laugh with the audience. Together, seniors create skits, dances, contests and jokes. Over the years, rules surrounding the Senior Show have changed, becoming more strict on content that’s allowed and that isn’t.

History teacher Sarah Lee is a WHS alumni who graduated in 2012. Lee participated in the Senior Show and had a lot of fun with it. The rules with the Senior Show used to be a lot more relaxed, but now administration has restricted the Senior Show from targeting grades or groups so no one would feel offended or hurt. Though there were restrictions this year, the new light-hearted skits still left the crowd smiling and enjoying the show.

One thing that doesn’t change about the show is the love for the dance performances. In 2012, Lee performed in the Senior Show with her friends and classmates and enjoyed every second of it. To this day, it is her favorite senior tradition.

“It was so fun to get on stage with 60 other girls in my grade, dance like an idiot in front of everyone else and not care,” said Lee.

Senior Sammy Janoff was one of the hosts for this year’s show. She also choreographed and performed in the dances. The Senior Show team had tech rehearsals, dress rehearsals and a full run through of the show leading up to their first performance.

“I felt like the show really came together in the end, and it was an awesome experience being on stage as a whole grade,” Janoff said.

Hill Night:
Hill Night. This decades old tradition started on Buzzy’s Bump, a hill behind the high school named after the Athletic Director at the time. In the past, classes dug the shape of their graduating year in the hill and colored it in. The night before their last day of school, seniors all came together and spent the night on the hill having one big sleepover. The morning after, they ran down the hill screaming, laughing and creating chaos. The tradition took different shapes over the years: sometimes seniors just walked into school the next day like nothing happened, other times they went running through the halls, banging on classroom windows, yelling and laughing. However, in recent years, Hill Night has been canceled by the administration.

Hill Night first began to change not because of the administration but because of setting. Before the current Wayland High School was built, the old school was just one floor, which was much easier to run through. In 2012, when the new school was finished, the tradition of running through the school was scheduled, rules were outlined and seniors all had to do it at the same time. Though seniors felt that the tradition was important to continue, they were stopped by their new principal.

“[Class of 2012] was like, ‘We’re gonna keep this tradition, we wanna keep this, this is powerful and important,’” said Lee. “At the time, [not running through the halls] seemed like a loss to the senior class, but as a whole, did it really make sense to bring to the new building? Probably not, and that’s probably why that part of the tradition fizzled out.”

Though the new structure of the building was part of the end of the beloved tradition, the main reason for the change was because the administration and the new principal at the time said how it was very disruptive to the other classes that were still going on.

Traditions are what bind classes together, and they leave a mark in one’s memory looking back on their high school experience. It’s a time for the seniors who have watched each other grow up and become the adults they are today. These traditions allow the seniors to bond and to graduate not remembering the stress and tears shed over grades, but to reminisce in the smiles shared in the stands at football games or in the audience at performances.