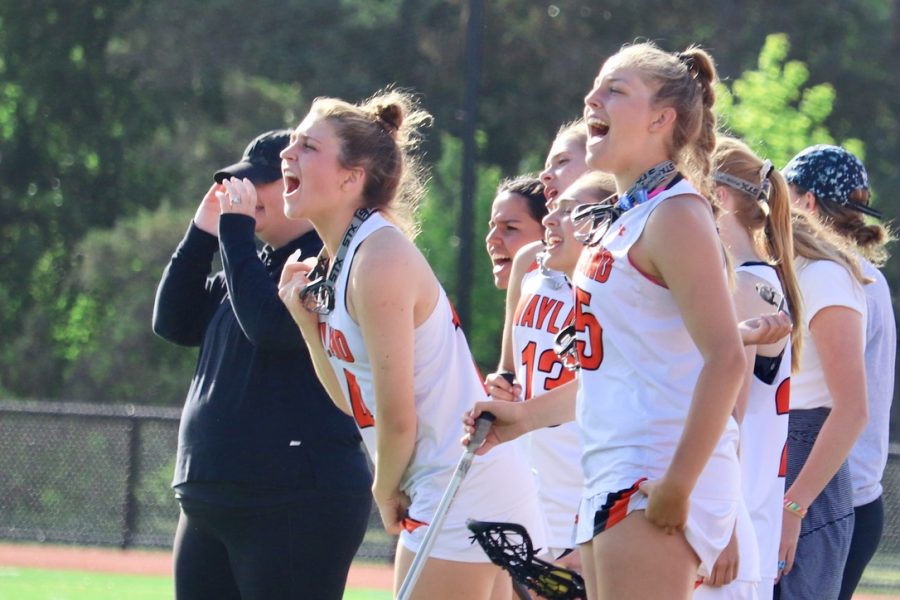 The girls lacrosse players cheer on their teammates from the sidelines during the game. This season, many WHS sport teams have experienced success in the early stages of playoff season and are moving forward into the next rounds of the MIAA tournament.

With the 2022 regular spring sports season coming to a close, it brings a fiercer competition, known as the MIAA state tournament. Currently, many Wayland High School teams are experiencing success while entering into tournament season, with six WHS teams still remaining in competition. Here is a preview and recap of the results of WHS teams.

Crew: The Wayland four boat, consisting of juniors Sophia Xie and Riley Kendall and sophomores Maddie Genis and Ava Balukonis, will be representing Massachusetts at Nationals. The competition is taking place in Sarasota Florida on June 9-12 and will feature numerous teams from across the nation.

Baseball: The baseball team qualified for the Division II State Tournament and fell to Pope Francis Academy 4-10 away on Saturday, June 4.

Boys tennis: The team is the No. 1 seed in the Division III Tournament and defeated Auburn High School on Sunday 5-0. The team also defeated Old Rochester High School on Wednesday in the Round of 16. The team will face Cape Cod Academy in their upcoming game on Friday, June 10 at the WHS courts.

Girls tennis: The girls tennis team is the No. 12 seed in the Division III Tournament and recently defeated No. 5 seeded Fairhaven High School on Wednesday, June 8. The team will face Dover-Sherborn High School on Sunday, June 12 for their next tournament game.

Boys lacrosse: The boys lacrosse team is ranked No. 12 in the Division III Tournament. The team defeated Apponequet Regional High School at home on Wednesday, June 8 with a score of 17-7. The team will face Grafton High School away on Saturday, June 12 in the Round of 16.