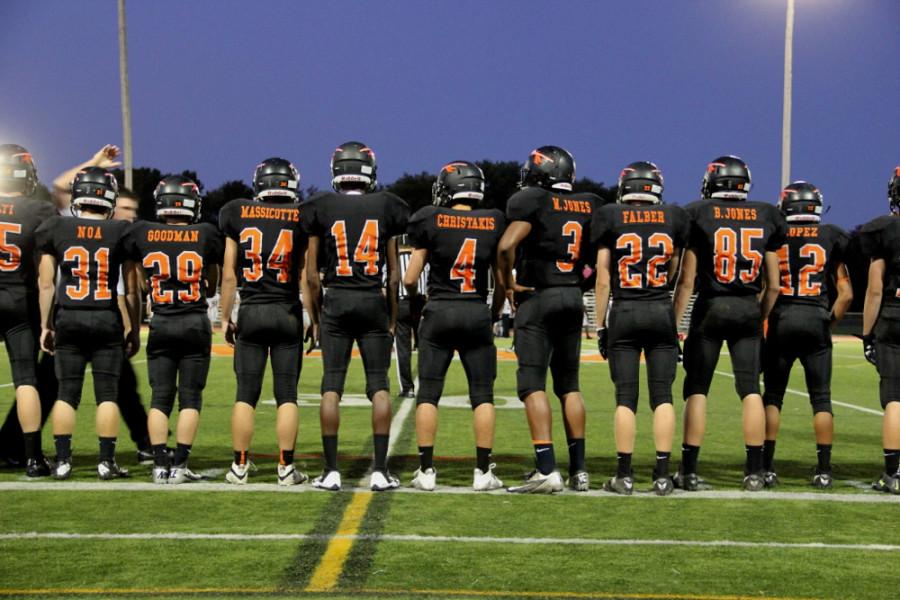 Above, the Wayland High School football team is featured in a previous game. This season, the team and many other sports teams are looking to have a successful season.

Boys’ Soccer
The boys’ soccer team has high hopes this year, looking to make a DCL title and win the state tournament. With good team chemistry and hard work, they believe that they can succeed in their goals.
Player to Watch: Andres Pascual-Leone (senior)

Girls’ Volleyball
Volleyball is hoping to repeat last year’s success of making it to tournament. With only graduating two players, the team is looking for victory with a strong returning team.
Players to Watch: Claire Greenlaw (senior) and Teresa Whitesell (senior)

Football
With the loss of the heavily relied upon running back Robert Williams Jr., quarterback Robert Jones will have to turn to running backs Wesley Jones and Jeremiah Darlington as well as an experienced batch of wide receivers to keep the offense rolling. The Warriors return only three defensive starters, but look for Charlie Tillett and Andy Carmichael to anchor another strong Wayland defense.
Players to watch: Robert Jones (senior), Andy Carmichael (senior) and Malvin Santana (sophomore)

Crew
With graduating many strong rowers and the loss of a coach and many seniors, the crew team will have to rely on some of the younger rowers. Despite the changes, they are optimistic that they will do as well as usual.
Players to watch: Audrey Zizza (senior)

Cross Country
The WHS cross country team is adjusting to the new coach Mark Mayall and is also hoping to win many meets. With many key runners, the team has high hopes.
Players to watch: Sarah Tully (sophomore), Joshua McCarthy (senior) and Nick Greenwood (senior)

Golf
This season, the WHS golf team is working hard to better execute under pressure. The golf team has more tournament experience and senior leadership than last season, and they hope to make a deep run in the tournament behind the leadership of captains Nick Morgan and Dylan Mordas.
Players to watch: Nick Morgan (senior), George Mead (junior) and Spencer Henley (senior)

Field Hockey
With a small team of only 16 players composed of 13 seniors and three juniors, the team hopes to have a strong season and make tournament.
Players to watch: Gianna Fargnoli (senior) and Emily Barnard (Junior)