Athlete of the Week: Andrés Pascual-Leone 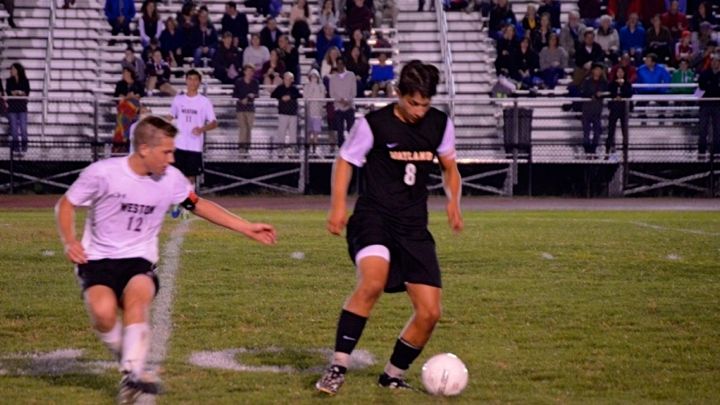 Pictured above is Andres Pascual-Leone vs. Weston on W-day. Pascual-Leone is a two time team captain and helped lead Wayland to the state championship this past season

Achievements: Pascual-Leone was voted a second team DCL all-star his sophomore year, and was a first team DCL all-star for both his junior and senior years, as well as an Eastern Mass all-star. He spent four years on varsity, serving as a captain for two of them. This past year he lead the team to a DCL co-championship, a North sectional championship and state championship. He was also Boston Globe All-Scholastic, Boston Herald All-Scholastic and was elected to the MetroWest Daily News “Super Team.”

Favorite Memory: One of Pascual-Leone’s favorite soccer memories was when he went to Spain with his family over the summer. Gaizka Mendieta, a former Spanish soccer player, had bought a house right next to theirs. While Pascual-Leone was playing pick-up soccer one day, Mendieta came out to watch them play. They asked the retired star if he wanted to play with them, and he said yes. Playing on the same field as Mendieta was a “dream come true” for Pascual-Leone.

Sports Idol: If Pascual-Leone had to pick an idol, it would be Xavi Hernandez, who plays soccer for FC Barcelona. Pascual-Leone admires Hernandez’s ability to pass the ball and keep his team together.

Quote: “I think all sports evoke raw emotion in people, it’s why people get so exuberant in victory and so distraught in defeat. I’ve played soccer for my entire life and really only played one sport. Obviously there have been times when I’ve hated the game, hated an outcome of a match or been upset with a certain rule, but they call soccer the beautiful game for a reason. To me it has an ability to bring millions of people together on a global scale that other sports don’t. I love soccer because whenever I get on the field for a game, I get butterflies in my stomach, and I realize that no matter the opponent, one play can change the game entirely. Since soccer is so low-scoring there is really a sense in the players and the fans that one play or one goal can be the deciding factor.”