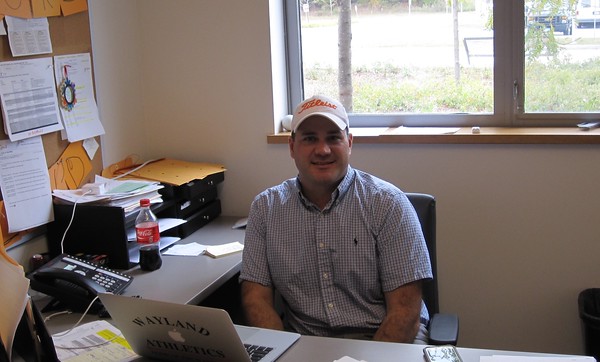 Heath Rollins has been hired as Wayland High School's new athletic director. “Wayland is about first class effort and first class performance. We have all the tools here to be a top notch program. It's here now and we’ll continue to work at it long term,” Rollins said.

Heath Rollins has been named WHS’s new athletic director. The tradition and “community focus on athletics” made Rollins want to work at Wayland. Rollins had spent 10 years at Dover-Sherborn High School before making the move to Wayland this year.

Even though he is only a couple months into his new job, Rollins already has a goal in mind for this upcoming year.

“I think we need to promote all the good things about Wayland athletics; there are a lot of good things going on here. The participation is amazing, from both the students and the community. It’s something we really have to promote and show, and it’s something I’d love to accomplish this year,” Rollins said.

Along with achieving his goals, Rollins hopes to continue what he believes to be Wayland’s strong athletic identity, which Rollins says requires effort and performance.

“Wayland is about first class effort and first class performance,” Rollins said. “We have all the tools here to be a top notch program. It’s here now, and we’ll continue to work at it long term.”

The diversity of his daily routine is one of Rollins’ favorite parts of being an athletic director.

“It’s a very hectic job because you’re doing so many different things throughout the day,” Rollins said. “Whether it’s working on buses, getting fields painted, talking to coaches, talking to students, talking to parents. That diversity of the position keeps me going. I have a short attention span, so it’s good things are always changing.”

Rollins says his love of sports began during his childhood in upstate New York.

“I grew up…in the middle of nowhere, and there really wasn’t much to do, so you played sports. That’s what you did to keep yourself active. You either got into trouble or kept yourself busy by working or playing sports, and that’s what I did,” Rollins said.

Rollins believes many of his youth coaches, who were great role models to him as a kid, played a role in getting him on track to becoming an athletic director.

“I had a lot of coaches who were great influences on me,” Rollins said. “I really wanted to provide that for other people, so I got into being a P.E. teacher, which led to being a coach, and then an Athletic Director.”

Allegations made by former athletic director Stephen Cass concerning wrongdoing in the high school’s athletic programs were much publicized last year and over the summer. In the few weeks that Rollins has worked at Wayland, he has already had to deal with those allegations.

“There has been time we have had to put into some of the allegations; some of them are not as valid as others. What it does is allows us to reassess our programs and see what we can do better, and I think it also highlights what we do well,” Rollins said. “Seeing the number of students [that participate], how even our participation is male to female across the board. It’s nice to take a step back and look deep into the programs.”

Rollins busy schedule has made it difficult for him to get to know the student population more in his first few weeks.

“I’m excited to get going and get to know people… I regret that I haven’t been able to get out and meet and talk to people,” Rollins said. “That’s something that will be happening soon.”