WW ’16: Nelson DeWitt shares the story of reconnecting with his birth family 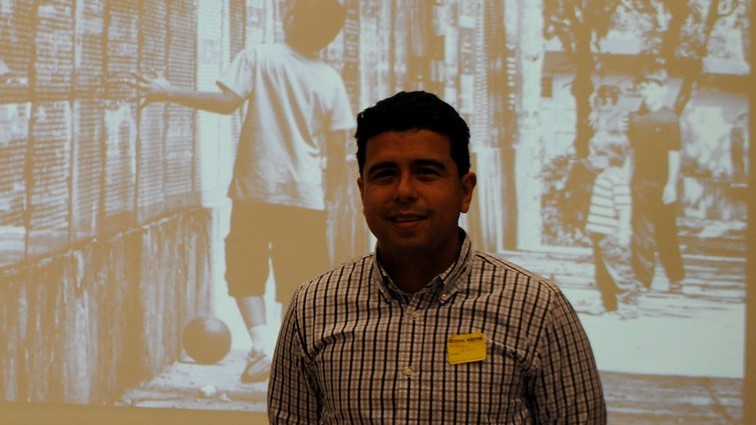 Above is Nelson DeWitt, who spoke to WHS students during Winter Week. DeWitt shared his experience of discovering that he was one of the missing children taken from his family in El Salvador during the Salvadoran Civil War. "It’s important to put ourselves in other people’s shoes, but it is often very hard to do so,” DeWitt said.

Nelson DeWitt gave a presentation to WHS students on Friday Feb., 5. DeWitt explained his story from childhood to present.

DeWitt was separated from his birth family when he was two years old during the Salvadoran civil war in El Salvador. His mother died in the civil war, and he was adopted by a family in Boston.

When DeWitt was 16 years old, his foster father received a phone call from physicians from Human Rights who told him that DeWitt’s biological parents were revolutionaries in the civil war. DeWitt’s grandmother had spent 14 years looking for him. DeWitt was unaware of his family and background.

“They basically did the research,” DeWitt said. “They connected the only baby photo my grandmother had of me to a photo that appeared in the newspaper. Then they were able to piece it together with my family back in the U.S.”

DeWitt believed that through empathy, the WHS student body could understand his story better. “It’s important to put ourselves in other people’s shoes, but it is often very hard to do so,” DeWitt said.

Throughout the presentation, DeWitt included examples from “The Hunger Games” and “Harry Potter.” Because many students and teachers have read or watched these two novels and movies, DeWitt thought it would be a good way for students to relate to his story.

“If we can learn to connect with the characters like Katniss Everdeen and Harry Potter, we can begin to understand the worldview of other people and what they are going through,” DeWitt said.

Nelson DeWitt was able to speak to a group of students at Wayland High School because of World Languages and Classics department head Melissa Bryant.

“Mr. Krasnoo, our Latin teacher, worked for several years at a YMCA summer camp in the Sturbridge area, during which time Nelson was a counselor,” Bryant said. “He got to know Nelson and has followed his work on a documentary project over the years, and we had previously talked about inviting him into Spanish classes to speak.”

Bryant was thrilled that DeWitt was able to come to WHS because students always tell her that they empathize more with speakers who tell their personal story. She was also excited about DeWitt’s content.

“I feel this is a great opportunity for young people to hear and listen to someone who knows first hand about the devastation of Inter-American politics and civil war and human rights abuses.” Bryant said.