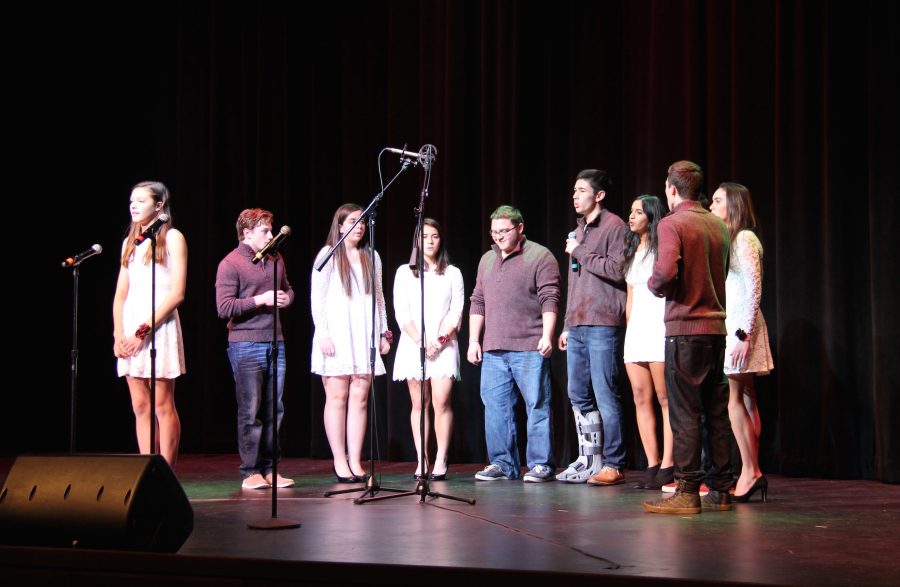 Pictured above is A Capella group The Madrigals. The Madrigals are one of three groups whose Sunday practices are being held back by the new waiver requirements.

Recently, WHS’ a cappella groups have adopted new rules regarding off-campus meetings without club advisor supervision. Before these rules were instated, the three a cappella groups – the Muses, the Testostertones and the Madrigals – met on Sunday nights to rehearse.

“All I know about the rules is that it’s a liability issue for us to rehearse at houses, we haven’t been told much more,” sophomore and T-Tones co-director Sid Iyer said. “I think I speak for everyone in a cappella when I say that I disagree with the rule, but it’s an obstacle that we have to work around for now.”

The a cappella groups perform in various concerts throughout the year. Due to tight schedules and restrictions, the groups practice Thursday nights after school on campus and Sunday nights off campus.

“The waiver allows [clubs meeting outside of school] to happen, so parents can allow their children to participate in those activities and the school feels good about providing that communication to the families,” Mizoguchi said.  “Making sure the kids are safe, and also making sure that we are not held liable if something were to happen off campus is our goal.”

Although the administration states that they are not trying to take away practice time from the groups, some a cappella members feel the rules have the opposite effect.

“My perspective is that [the rule] is not fair,” Mysore said.  “It doesn’t make sense because many clubs and activities sponsored by the school are allowed to meet at people’s houses more often than not. Therefore, it’s not fair to single out some clubs.”

Senior and Muses co-director Sophia Calder expressed dismay at not being able to go out as a group even for dinners or sleepovers outside of practicing hours.

“We were also encouraged not to get together even as friends for sleepovers or for dinner. Teams have dinners and school plays have cast parties, and even for a cappella last year many students drove into Boston during a snowstorm in order to record an album. Myself and others–especially parents–felt this was very ridiculous,” Calder said.

However, the administration says that once the students and parents sign the waiver, there will not be any restrictions on when and where the groups can meet.

“I think as we make a plan for the future we will identify other clubs that we’re going to want to have some sort of a waiver,” Mizoguchi said. “We will hopefully create a really user-friendly mechanism for students and families to review the waiver, sign it, return it and we’re good to go.”