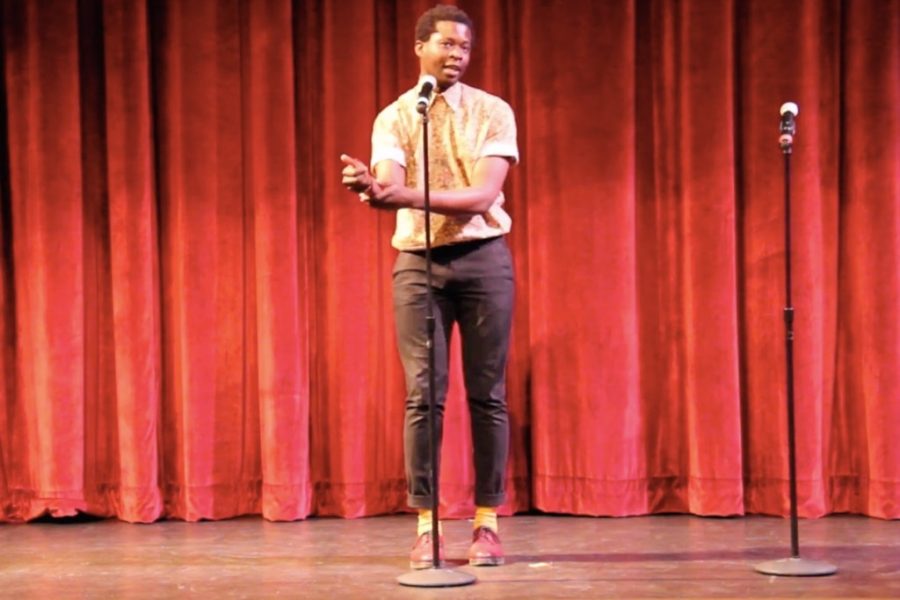 WSPN caught up with the poets from Tuesday’s poetry slam and asked them a few questions about their experiences with slam poetry.

When/Where did you start participating in Poetry Slams?

Sam Rush:
“I first started performing poetry because in high school my teacher showed my class “Def Poetry Jam,” which is a show on HBO where a bunch of slam poets perform on TV. He showed it to our class and I thought it was so cool. I thought about it from afar for many years, and then just a couple years ago someone told me about the Poetry Slam, so I went to it.”

“I feel like Slam Poetry–especially in the United States–is really related to social justice. In terms of pushing the conversation about where we are as a culture and how we treat each other, young people are growing up with different language. Language that I didn’t have. So the poems that they’re going to write are going to teach me things that I don’t think I can get to. Every artist can keep growing, but we need young people to keep this moving.” (23:18)

Jonathan Mendoza:
“I started in high school (Framingham High School). We had a school wide poetry slam. One of my friends who was older than me told me to go to a summer program which had a poetry slam in Boston. My teachers also inspired me to do it, and my professors in college.”

Emmanuel Oppong-Yeboah:
“I went to an after school program in middle school called Citizen Schools. Part of that program was [a time when] you could chose to do a workshop in different subjects or a poetry workshop, and since I was a nerd, I chose poetry. We sat in a class and watched poetry. One of the first one we watched was about 9/11, which did something for me. I learned that poems can do things. I wrote my first slam poem that year and performed it at an event that we had. Years later in college, I remember passing by some students in a union on stage saying poems, and I [realized what they were doing.] It’s history from there.”

Alex Charalambides:
“I found it late in life, as I was in my mid 20s. I had been a writer, short stories, screenplays. I was trying to be in a band, even though I couldn’t sing that well. I knew I had [a] kind of energy, but I couldn’t find that community of people to either be in a movie with me, or be in a band with me. I was hitting this artistic wall where I was really frustrated not having a place to put my voice. I saw this movie called “Slam,” starring Tar Williams. He was the first person I saw perform poetry. At the time, I was pretty hit. I had no idea people were doing this. So, within a month of seeing that movie, I had my first open mic in Worcester. A year later, I joined a poetry slam team.

How were you inspired to start writing poetry?

Princess Moon:
“When I was 13, I had a substitute teacher and instead of following the curriculum that my teacher left behind, he did a poem. I started writing then and there, and he has been my mentor for [about] 10 years. He’s like my dad.”

Sam Rush:
“I think a big thing that really made me dig poetry was that I have hearing loss. I liked writing when I was a kid, and I started off writing music before poetry when I started losing my hearing. I would have to go through a lot to understand what somebody was saying, like going through different words, sounds, and rhymes. It made interacting with people very abstract and strange, so this put my brain in this different world for writing poetry.”

Emmanuel Oppong-Yeboah:
“I grew up in church, my family is very religious. When I was a kid, I went to church about three times a week. For me, I learned really quickly as a child that music can do something to people. One thing I really liked to do as a kid was make up songs. So, in my head I would write and sing songs, and for me, those were like my first poems. When I started writing I [aimed to] make something sound good and mean something at the same time. [I also wanted it to] make that song consistent so it sings. That’s basically what a poem is for me.”

Alex:
“I definitely think of poetry as energy, the energy of any feeling, or any thought, or putting it down on notebook paper. I love poetry slam because it’s all that energy from the minute you wrote that poem that is now delivered back to an audience. To me, it is the transaction. It’s great that a lot of poems today are getting published, and I do like to think that a hundred years from now one of my poems might get published. This does sound cool to me, but not as cool as hearing somebody chuckle, or seeing someone nod along. That is the best.”

A list of poems was compiled collectively when asked about their favorite poems:

What is your favorite memory from past slams?

Emmanuel:
“Michelle Garcia and Kofe just turned 18, and went to the ‘Haley House’ for the first time ever. They are both youth poets who have been mentored by other Mass Leap teachers and have competed. They competed against poets who have won the Haley House Slam in past years. Both of them came in and won everything, and beat out all of the older poets. At first I was a bit mad, how are you that good at [only] age 18? I was also so proud. It really shows how deep the community stretches, and how connected we are. People who have been mentored from others, are now taking their places.”

Alex:
“It’s not about them (Garcia and Kofe) being next, it’s them being now. They are on point.”

Do you ever get nervous while performing?

Princess Moon:
“It’s scary, it’s always scary for me. I remember when I first started out, I was so nervous, like I usually am, but I was just starting. [Being nervous] warms me up, and gets me ready to perform, it reminds me that I still care about what I have to talk about, and what’s going on in my life, I’m still passionate as ever.”

Jonathan:
“I really want teenagers to think I’m cool, and sometimes it doesn’t work out. I’m always nervous competing, but when I’m coming to schools, if kids don’t think I’m cool, that’ll crush me. I don’t think the nerves will ever go away. I often think of nervousness as energy of some kind that needs to be released.”

Alex:
“Pretty much one minute before every time I introduce Princess to the stage at any venue, she tugs on my sleeve and says ‘Alex, I’m so nervous!’ I’ve gotten used to it to the point where I don’t wanna hear it.”

How has writing poetry and participating slams changed your life?

“I’d be a completely different person if I wasn’t a writer. I was very quiet in high school, which I loved. I never talked about anything going on in my family, or what I was feeling at all, and one day I decided to give [poetry] a shot. I was so bad when I started, but I went to Brave New Voices that year, and there I found that there were so many other kids my age that love doing what I do, and it inspired me a lot. I learned a lot about myself through writing, and it’s awesome because the more you write, the more you realize what you really care about.”

“Slamming is really about everyone pushing everyone to be better.”

Jonathan:
“It’s interesting because I don’t think I’ve thought about this that much, but I always wanted to combine social activism and the arts. Initially I wanted to tell stories that people weren’t talking about to affect people. Originally I wanted to be a film director, and then once I discovered performance poetry, my intention was to change my surroundings and change the way people see things.”

“My hope is that I’ve affected people’s perspectives in some way, but I also would be a very different person without [poetry] in terms of my confidence and my ability as a leader and my speaking and presentation skills.”

Sam:
“I think one thing that I really dig about this community is that I feel like people hold each other accountable, and I feel like being part of this community for an extended period of time has given me the ability to have a confidence that’s not rooted in always being right. It’s rooted in being deliberate and thoughtful. People can hate me and I have to be okay with that.”

“Growing as a culture is not a spectator sport. It’s all of us and we’re all going to be messing up, and [poetry] has taught me how to live in that space.”