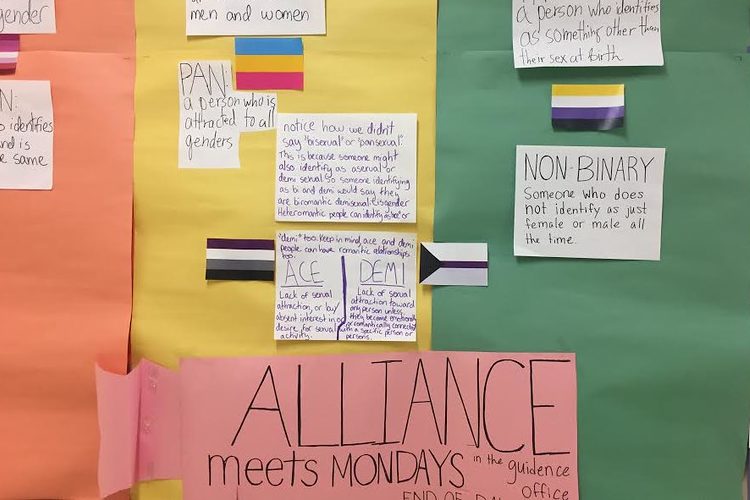 The Wayland Alliance poster in the English wing at WHS. The Alliance held a panel discussion with six WHS LGBT students during which they described and explained their identities. “Perhaps people who came left with a renewed sense of purpose and will be prepared to respond to disrespectful or homophobic comments,” Alliance co-advisor Rosenthal said. “That would be great.”

“The purpose of the Out & Proud panel is to create a more personal environment and connection between LGBT+ students and [other] WHS [students],” freshman and Alliance member Sylvia Lagor said. “It’s supposed to be a comfortable environment for anyone to ask anything, and I hope that that feeling was achieved.”

During the beginning of the panel, Lagor, senior Abby McCarthy, sophomore Emma Marton, senior Anna Marobella, senior Meg Trogolo and sophomore Emily Rader explained their sexuality and how they came to discover it. The rest of the event consisted mainly of audience questions and additional experiences shared by the panelists. Approximately 12 students were present at the panel during each lunch.

There were many challenges described by the six panelists, including coming out to their parents and coming to terms with their true identity. Several panelists expressed their frustration that many people believe that members of the LGBTQ community are not allowed to note that individuals are attractive since they aren’t supposed to have relationships with them. One particular panelist made an analogy by stating that saying even though she may find a sunflower attractive, she does not necessarily want to have a relationship with it.

“I suggested the idea [for a panel] after the Wayland Alliance board renovation project was completed. I thought that it would be a great way to explain some [LGBTQ] terms to those who might not understand,” Lagor said. “People seemed positive about the idea, and expressed an interest in talking about specific issues in the panel as well. It was also pointed out that creating an open, student-run panel seemed like a good follow-up to the PFLAG panel, which wasn’t student-run.”

According to co-advisor Naomi Rosenthal, The Wayland Alliance is WHS’ Gay Straight Alliance, or GSA. A student-run club, its primary goal is to bring together students who are a part of the LGBTQ community and their straight allies. Other goals of the club include supporting one another, providing a safe space to talk and an opportunity to educate the school community about LGBTQ issues. Rosenthal advises the club along with guidance counselor Jen Sullivan.

Rosenthal noted that although the Alliance acknowledged the possibility of disrespectful gossip or damaging actions through sharing their stories and sexualities, both the club and the panelists were willing to take the risk because of the importance of the topic.

Both Rosenthal and Marobella believed that the panel was a success, creating a light and inclusive mood while simultaneously educating the audience members.

“Perhaps people who came left with a renewed sense of purpose and will be prepared to respond to disrespectful or homophobic comments,” Rosenthal said. “That would be great.”