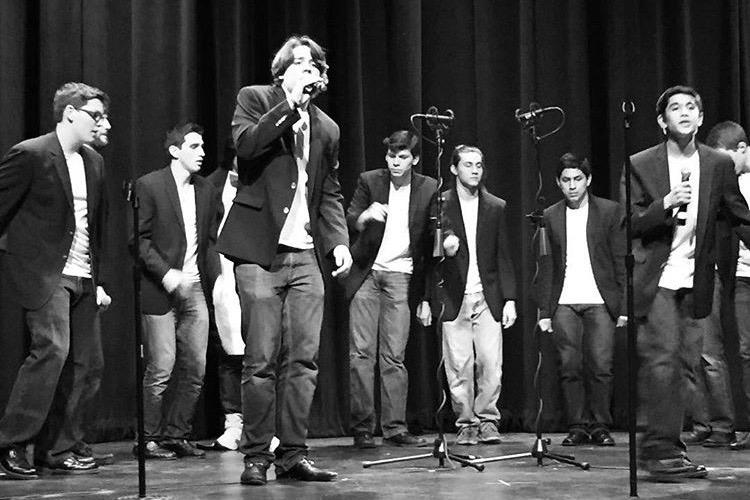 Pictured above is Sid Iyer and Zach Knapp singing during their a capella concert. Zach and Sid are both directors of the T-tones a cappella group at the high school.

The National Association for Music Education is an association of music educators, teachers, and fine arts directors who have created a national group of student musicians in order to provide musicians for performances at festivals throughout the region.

Last May, Knapp and Iyer were selected for the All-National Honor Choir tryout, and were accepted into the program. They will receive assigned music and begin to work with the rest of those accepted in the region in preparation for a performance at Coronado Springs Resort at Walt Disney World in Orlando, Florida on Nov. 28, 2017.

The process to get into NAfME is extensive. There are auditions upon auditions, and months of training involved. The first important audition is for the MMEA Eastern Senior Festival, more commonly known as senior districts. Senior districts is a chorus for high school students throughout the Massachusetts Music Educators Association’s Eastern district. You must audition with a song, a scale and sight reading. If you receive a high enough score, you will get accepted into the chorus. If you get an even higher score, you may be able to audition for All-State.

For Knapp and Iyer, nerves were a large factor that played into these important auditions. Knapp described his feelings during his first auditions compared to his last.

“The first time I ever auditioned for something I was really nervous, but as auditions go on, you start getting better and better, and you start to make better ensembles. The nerves sort of go away after a while,” Knapp said.

Both Wayland musicians expressed how happy they were when they were informed of their acceptances. Getting that reassurance after months of hard work is undoubtedly a great accomplishment, so naturally Knapp and Iyer were proud of each other, and themselves.

“I was very happy and proud of myself, I didn’t think it would happen. It’s nice to go to All-States, but this an entirely different level,” Knapp said.