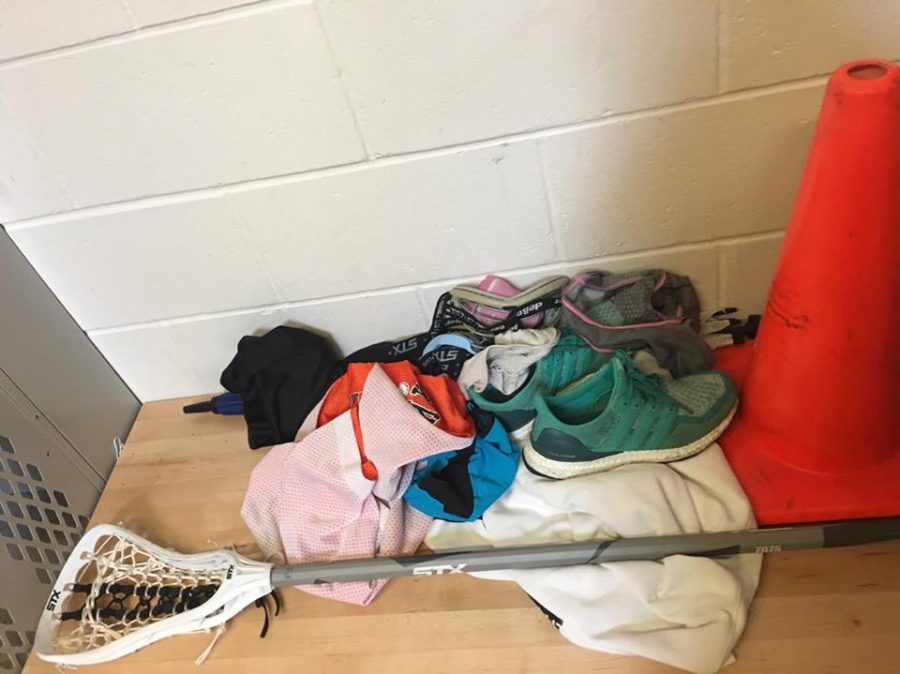 Pictured above is sophomore Fatma Sayeh’s remaining belongings laid out on a bench in the women’s locker room.

Over the past few years, items of all kind have been misplaced or stolen from Wayland High School locker rooms.

“I was walking inside and I found all [of] my stuff in a pile,” Sayeh said. “[I saw] my sneakers, my clothes, my stick, my goggles, [but] I just couldn’t find my bag. They emptied out everything inside it except [for] my necklace and my mouthguard.”

A similar experience happened to junior Lillya Shayan. Last spring, she noticed a pair of her Lululemon leggings were missing.

“I had lacrosse practice after school, [and] I had changed out of my regular clothes and into my athletic clothes,” Shayan said. “I put [them] into my bag and into the locker. There was no lock on the locker, but I didn’t expect anyone to take [them]. I thought maybe I had misplaced [them], but they were just stolen.”

The same events are occurring in the boys locker room. Sophomore Paul Curtin had his money taken during April of last year.

“I went into the locker room and I had 20 [dollars] in my wallet. [I then realized my money] was gone,” Curtin said.

According to Shayan, the most efficient solution to prevent this problem is for everyone to use locks on their lockers.

Wellness coach Amanda Cosenza and Principal Allyson Mizoguchi both had a similar stand on what was occurring in the locker room, saying that there are ways for this to be prevented.

“If I take a class outside for physical education, and we come back and someone says their stuff was stolen, Officer Bowles can check the cameras [which are] outside the locker rooms,” Cosenza said.

Mizoguchi hasn’t been aware of any theft issues this year, but she has addressed the issue in past years.

“In the past we have taken steps to remind students to lock their belongings in their school issued lockers in the locker room. It’s my understanding that all students have a lockable space in there, and I understand that in the flurry of after school activities or changing for wellness class, students don’t always toss their belongings into a locked locker. So, [we’ve] really reminded students to do that,” Mizoguchi said.

According to the administration, coming up with the right solution to prevent theft is very tricky, and maybe even impossible.

“The other piece is that we’ve had lots of discussions and problem solving conversations about to what extent can we just lock the locker rooms entirely. During what periods of the day, and during wellness class can we lock the locker rooms and shut them down,” Mizoguchi said. “Then we run into logistical issues where students need access to [the] locker rooms during the wellness class. The one thing we continue turning back to is just having students lock their belongings.”