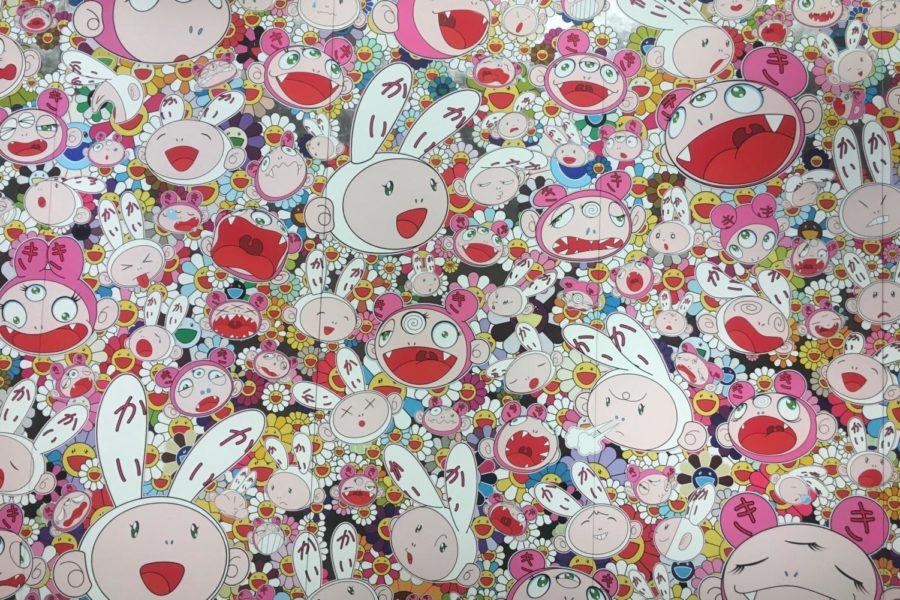 "Lots, Lots of Kaikai and Kiki" by Takashi Murakami (2009). Acrylic and platinum on canvas mounted on aluminium frame.

Once passed the imposing glass door, there is another world that is waiting for the audience. Indeed, the exhibition, “Lineage of Eccentrics,” stands out from the neoclassical style of the main building with its modernness and the energy it emits. Through this new display, held by the Museum of Fine Arts in Boston, contemporary works of the eminent Japanese artist Takashi Murakami are blended with pieces directly stemming from the MFA’s renowned collection of Japanese art. However, it would have never been possible without the collaboration of the Japanese art historian Nobuo Tsuji. Thus, the entire exposition claims to be a lively conversation between professor Tsuji and Murakami, who founded it together. The name of the exhibit is the eponym of one of Tsuji’s most famous books: “Lineage of Eccentrics,” which largely inspired Murakami’s art.

When entering the display, one’s attention is instantly drawn by the two paintings of “Mr. DOB,” which is somewhat reminiscent of the famous American cartoon character Mickey Mouse. It is this character that the whole purpose of Murakami’s Superflat takes shape. This concept, created in 2000 by the artist, ensues from Andy Warhol’s pop art and its abolition of “high” and “low” art. For Murakami, it is also a way to embody a sort of inferiority complex before American art that the Japanese have been struggling with. He explains that Japanese paintings seem at first glance lacking in force and in edginess, but it is in reality throughout this flatness that its trendsetting hallmark is emphasized.

In the second room, the spectator is fully immersed in Murakami’s art essence itself. Indeed, there is a gigantic metallic panel, gold-covered and plastered with cheerful, vivid flowers. These flamboyant characters, inspired by the Hello Kitty era, embody the entire universe of Murakami. This impressive masterpiece is almost like an ode to the otaku, a subcultural Japanese movement which emerges from a fantasy universe portrayed in anime (animated cartoons) and manga, as well as the idea of kawaii (everything cute). This movement marks a decisive point for the artist as the main inspiration, but the raw material from which he built his stance is sometimes cynical and critical of consumption in Japanese society. On the left is juxtaposed another panel, this time distinctly more traditional. The latter dates from the Edo period (17th century) and represents poppies. Then the viewer realizes the proximity of a traditional movement and resolutely modern art. Although the style of flowers is poles apart, the technique stays the same. This work is also an integrant part of a whole decor, at once adroitly and meticulously put in place. An enticing and light-hearted atmosphere spreads from the floor covered with joyful daisies to the central masterpiece with the same patterns, passing by the two old adjacent panels without forgetting the lamps illuminating the room gently with their subdued, warm light.

In the following room, the painting “Lots, Lots of Kaikai and Kiki” faces the spectator, illustrating, in all its splendor, the Asobi concept, or the idea of playfulness. This masterpiece establishes itself as the antipode of Murakami’s fascination for somber and grotesque sci-fi characters. It is, however, full of humorous face-making monsters, vanished among the cheerful flowers. Kiki, the character with sharp teeth, pink bear ears and a third eye, is the first to be created, promptly joined by its companion Kaikai, with rabbit ears. Their names directly ensue from the Japanese expression “kaikai kiki,” meaning “dangerous yet appealing.” But if we transpose the syllables it depicts a supernatural aura, abounding in ghosts and another strange phenomenon. More globally, Murakami shows another aspect of Japan, often viewed as serious and grave. That is to say it has a sophisticated sense of humor added to a taste of friskiness. Yet, this part of Japanese lifestyle is conveyed more and more, especially through the prominent culture of manga and cosplay.

The exhibit is completed by a rich religious collection. In this section, the entire history of religion in Japan is portrayed and revisited through the fresh and keen perspective of Murakami. According to professor Tsuji, these animistic beliefs, also known as Shinto, represent the essence of Japanese links to religion, particularly via a Buddhist cult who arrived there in the sixth century. Buddhism in art often takes the shape of warriors fighting demons and triumphing for death. An image shown was painted by the 18th-century artist Soga Shohaku, in a “Tug-of-war with a Demon,” and used by Takashi Murakami. It is the legendary patriarch of the ancient Zen sect. In the same way, Murakami explores the aesthetic of wabi-sabi which focuses on the acceptance of ephemerality and imperfection.

To finish, Murakami enlightens the eccentricity, meaning the bizarre or fantasist nature of an image-making, in Japanese art. “Dragon in Clouds—Red Mutation” is the individual and outlandish masterpiece of Murakami, painted “in annoyance” in 24 hours, after professor Tsuji told him, “why don’t you paint something yourself for once?” The sixty-feet monumental painting is a part of a series of twenty-one works, known as “Battle Royale!” and directly inspired from the “Dragon and Clouds” of the 1700’s artist Soga Shohaku, but subtly suffused with Murakami’s universe.

This exhibition embodies a vibrating dialogue between an art resolutely modern and a same traditional version, witness of a vaster and more imposing history. As Murakami’s artwork deeply resonates with traditional art, it allows it to create bridges between modernity and tradition. At the same time, it constitutes the testament of social, technological and economic changes in Japan, a country full of artistic mutations, drawing its essence in the immensity and complexity of its history. “Lineage of Eccentrics” is, therefore, a rich and passionating exhibit to be seen and seen again until April 1, 2018.