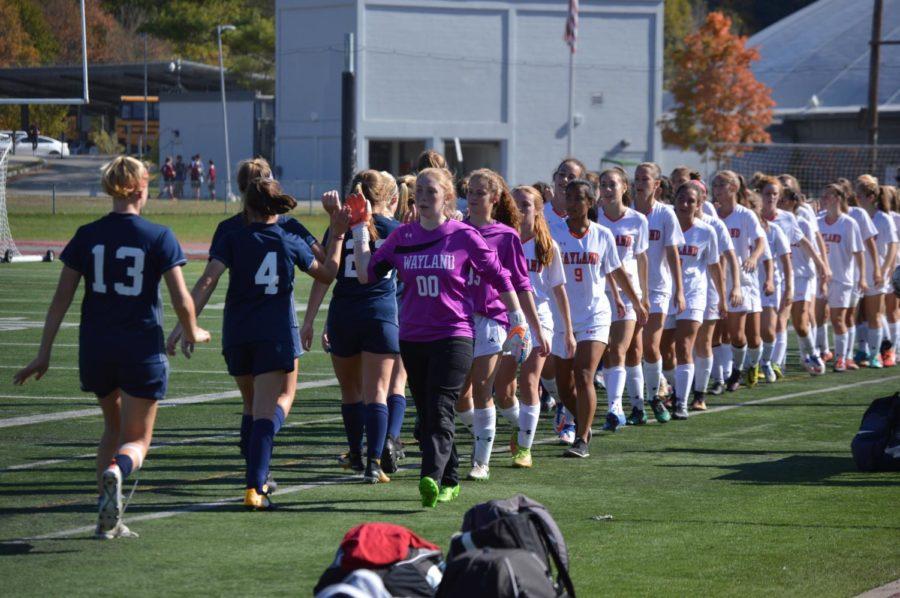 Pictured above is the girls' varsity soccer team during the game against Cohasset.

The fall sports season has come to an end. Here’s how each of the WHS teams fared during the season.

Playoffs/tournament: Lost in the sectional quarterfinals

“I think we had a solid season, 7-4 is a great record,” senior captain Ben Robinson said. “There definitely were a lot of games we should have won that I have a lot of regret about, but overall [we had] a good season.”

“We had a great season, we had a lot of good wins and we had some great girls,” senior captain Helen Cliff said.

“We had a few games that went to a full five sets and were so close,” senior captain Naomi Lathan said. “The first one I remember was when we played Belmont. It was really close and went to five sets, and we’re not usually used to that because we struggled in the past. We lost the game but it kind of gave us a lot of momentum heading into the rest of the season. Definitely, the biggest win for me this season was when we beat Weston on senior night because we don’t win a lot and it was senior night. It was really exciting.”

“The Weston game that happened two days ago– that was really special,” senior captain Zack Dresens said. “Playoffs against other rivals, [there were] a lot of student fans, and we were down 2-0 [which] shows a real grit to come back and win, and I think overall over my four years that’s definitely one of my favorite memories.”

“This team was very special,” senior captain Brooke LaPierre said. “We were all very close and that’s definitely why we were so successful. There really wasn’t a divide [between] upperclassmen and underclassmen like you see on other sports teams. The team was also very close to our coaching staff which made the season and playoffs/tournament a lot more fun.”

“We didn’t make the playoffs but we had a pretty good season playing in a tough division,” senior captain Chris Balicki said. “We also played spoiler for Swampscott at the end of the season.”

“We didn’t exactly have the victories we wanted but we ended up really pulling ourselves together by the end of the season,” senior Lindsay Jacobs said. “We were scoring in games with teams like LS, which is a rarity when you’re going up against these girls that are committed to D1 schools.”

Playoffs/tournament: placed 17th out of 24 at divisionals

“An overall highlight for most of the team was running at the Bob Mcintyre Twilight meet in Falmouth, MA,” senior captain Matt Clayton said. “Cross-country, in general, tends to be a very laid back sport, so big invitationals such as Twilight are always a lot of fun.”