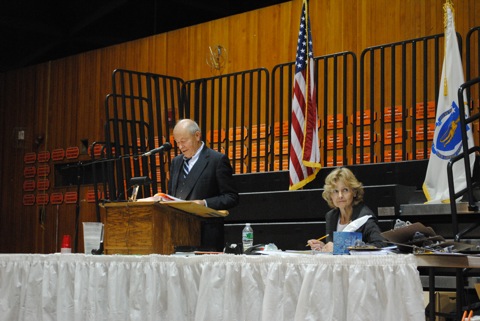 The town moderator oversees debate on the town meeting floor during a recent town meeting.

Wayland voters recently approved a six-month moratorium on the opening of marijuana stores in town. Sarah Greenaway, a sponsor of the moratorium and a member from the Youth Advisory Committee (a town department that supports and oversees the healthy development of young Wayland residents and families), explained the difference in the turnout of the votes on Tuesday, Nov. 14 and the other time she presented this article.

“When the law passed voting to legalize recreational marijuana, our group, the Youth Advisory Committee, considered [whether or not it] was going to impact our town, our families and our youth,” Greenaway said. “[After some consideration], we thought it was worth delaying.”

One concern raised in the debate over the moratorium was the effect of marijuana shops in Wayland on WHS students. Edibles, food laced with marijuana, are one potential way students could be affected. Speaking for her committee, Greenaway discussed the dangers of edibles for students.

“We don’t know if it would impact [the students] but the Youth Advisory Committee is still concerned,” Greenaway said. “One of the big concerns with the pot shops is that there are edibles. Edibles have varied concentrations of levels of THC, which is the active drug in marijuana that is responsible for the high feeling.”

“Marijuana is the most used substance for students,” Verhoosky said. “The more we become accustomed to seeing something the more normal it becomes. It’s not odd to drive by liquor store; liquor has been legal for a long, long time. If we treat marijuana the same way we treat alcohol, which is basically what the law says we should do, then we’re normalizing it and increasing access to it. [And that’s] not saying that it’s not already here.”

“I just don’t like all the marketing that legalizing marijuana would entail, kind of like tobacco marketing,” Hanks said. “It’s gonna be this huge for-profit business.”

Some residents believe there are many downsides to having pot shops in town and that there should not be any in Wayland. Hanks believes this could be because bringing marijuana shops to Wayland will make it easier to get the drug.

“I think it’s for convenience,” Hanks said. “[My family] didn’t move to Wayland because it had four liquor stores. It wasn’t like we couldn’t move to a town that didn’t have liquor stores, but for some people that might be an important point.”

There are many reasons to want and to not want pot shops in Wayland. Verhoosky agrees with Greenaway and Hanks.

“Personally, in the perspective of Wayland Cares, we don’t take a stance one way or another,” Verhoosky said. “That being said, [I believe] the harm outweighs the potential for good.”