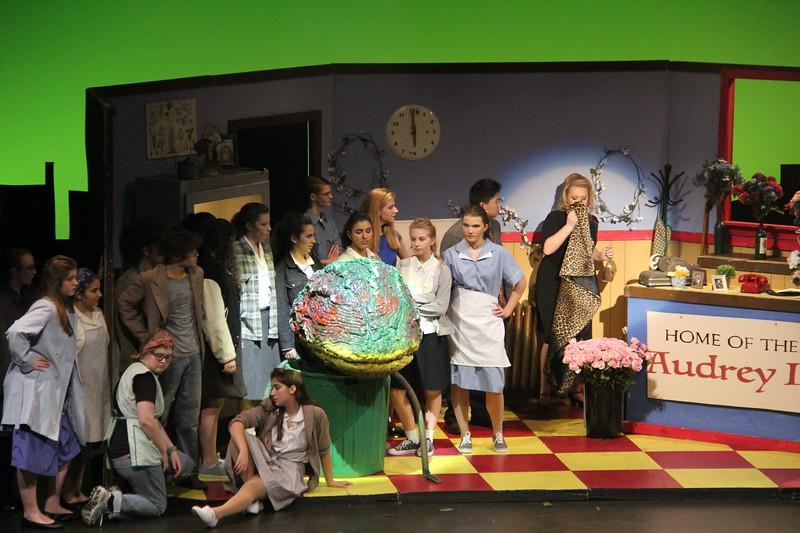 Pictured above is this past fall's cast of the musical, Little Shop of Horrors, directed by drama teacher Aidan O'Hara.

After a successful showing of “Little Shop of Horrors” this past fall, the Wayland High School Theater Ensemble (WHSTE) will be presenting “Reckless,” a one-act play by Craig Lucas, this winter. “Reckless” follows a woman who begins a series of escapades starting on Christmas Eve while her sanity becomes increasingly shaky.

Aidan O’Hara, who replaced longtime drama teacher Richard Weingartner this year, gave his take on the play he will be directing.

“Reckless is a quirky, absurd comedy that sort of explores the idea of whether the people around us are ever who they really say they are,” O’Hara said. “It messes with that idea and plays with it and puts an absurd, outrageous spin on it, in a certain way.”

Wayland’s version of the play will be entered into the Massachusetts Educational Theater Guild (METG) drama festival in early March.

“[METG] is a drama festival in which over 100 high schools throughout Massachusetts each bring their own 40-minute, one-act play. There are 14 festivals on this one Saturday, where eight schools are performing,” O’Hara said.

“We’ll get [to the high school] at 6 a.m., load up our truck with our set, and travel to a high school [that’s yet] to be determined,” O’Hara said.

Students who are interested in acting have already signed up for the play, but nobody has been assigned a role yet.

“Before the New Year, [we’ll be] workshopping this piece. We have a cast, but no one’s been casted as a character yet; we’re just all sort of playing with the material,” O’Hara said.

The METG drama festival requires that the plays are around 40 minutes long, so WHSTE needs to work on meeting this goal.

“The piece is about 80 minutes long, and we have to get it down to 40, so we have to edit it and cut it down, and then right before break we’ll cast it, and then [the students will] know their part.”

O’Hara said that the decisions on cutting down the script of the play were a group effort.

“We’re trying to [cut the play down] as a group, and get [student] input on how to take a three-minute scene and get it down to 90 seconds without losing the gist of the story.”

Besides performing at the festivals, WHSTE will also be performing “Reckless” for Wayland High School as well.