Artist of the Month: Sophia Schroeder 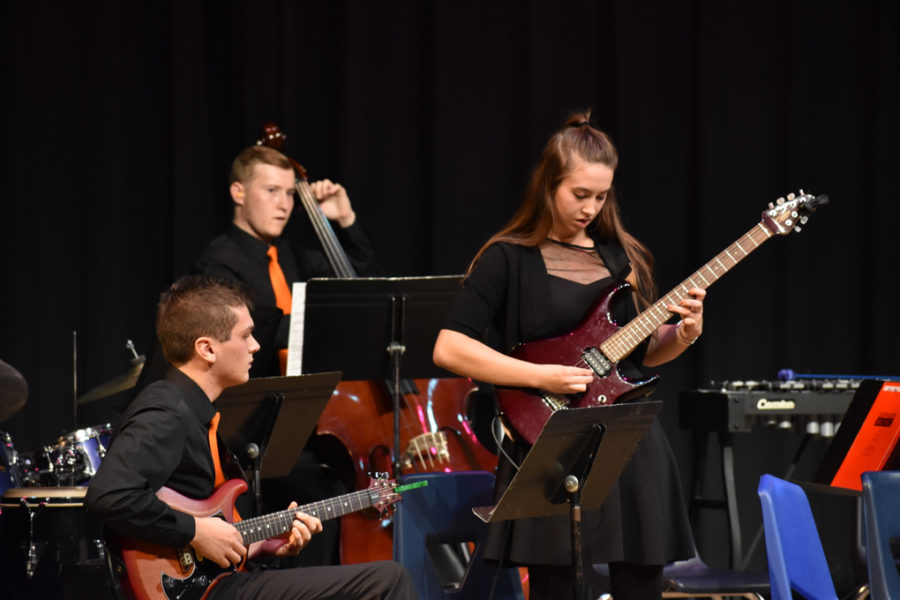 Pictured above is junior Sophia Schroeder playing at a WHS jazz band concert. "[The guitar] is really versatile, and I feel like you can play pretty much anything if you work at it," Schroeder said.

Music has been a passion for junior Sophia Schroeder since her early years, dating all the way back to elementary school. After Schroeder discovered that she didn’t like the violin, her father encouraged her to try playing the acoustic guitar. She picked up the guitar in fifth grade and fell in love with the versatility of the instrument.

“My dad actually took me to Music Around back when it was still around Stop and Shop, and he kind of forced me to get my first acoustic guitar. He was the one who first forced me to play, but I’m happy he did,” Schroeder said.

In seventh grade, Schroeder decided to try the electric guitar, and eventually joined the jazz band.

“[Jazz Band] was the only aspect of the fine arts program in middle school that involved guitar, and I wanted to play for an organization. I wanted to play with other people instead of by myself,” Schroeder said.

Recently, Schroeder played in the Wayland High School talent show during Winter Week 2018. She decided to participate because of the freedom and environment involved in the show.

“The talent show is one of the few events where I feel like I can play the music that I want to play–plus its fun,” Schroeder said. “The environment is fun; it’s really nice to play in front of the school, the atmosphere is really nice.”

Despite the apparent ease of Schroeder’s playing, according to her, learning guitar is no easy feat.

“I take lessons once every week. I’ve had the same teacher for probably five years. I will try to practice once every day for two hours if I can. Over the summer it’s more like 3 hours,” Schroeder said. “I try to squeeze in as much practice time as I can with my schedule, sometimes that’s hard especially now, but I try to reserve a good amount of time.”

Schroeder likes many different genres of music associated with guitar, her favorite being rock, and she enjoys listening and playing to music by Metallica. She enjoys jazz as well, but she prefers to focus on that during the summer in preparation for the school band. Classic rock and 80s music are what she loves most.

Outside of the talent show, she also plays at open mic nights and family gatherings. One memory, in particular, that is a highlight for Schroeder is the fifth-grade talent show.

“It was my first real performance in front of an audience, and I was really nervous. I like the feeling of being on stage,” Schroeder said. “Just playing the music that I like in front of everybody, and the music that everybody else really liked was fun. It kick-started my wanting to play for others and play music that others could enjoy.”

Schroeder’s love for the guitar has only flourished since 5th grade, and according to her, a guitar will always brighten the mood in a room. She also feels as though it will be a definitive factor in her future.