Athlete of the Month: Ramazan Attasauov 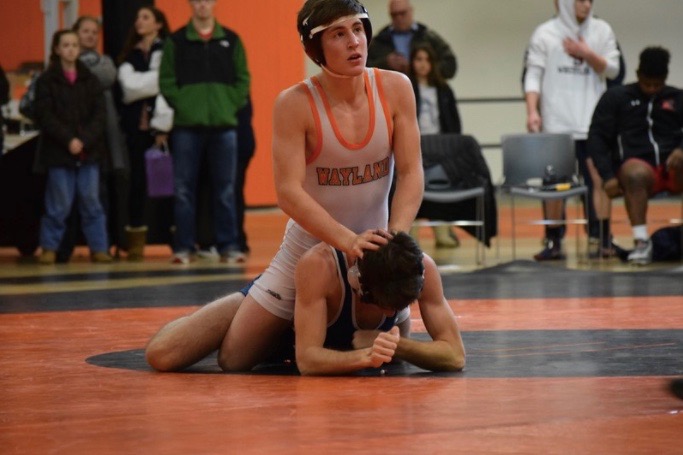 Senior Ramazan Attasuav pins down his opponent during a match.

Russian international student Ramazan Attasauov has only been at Wayland High School for two years, but the senior has already made his mark on the wrestling team.

Since enrolling at WHS, Attasauov has achieved seven awards, including being ranked fifth best wrestler in Massachusetts, becoming a two-time MIAA All-State Champion and a second place finish at the Journeyman Tournament, which includes wrestlers from different countries.

Despite Attasauov’s seemingly smooth transition into American wrestling, the adjustment was more stressful than it appeared.

“The biggest obstacles for me were moving to America, learning the language and the new style of wrestling,” Attasauov said. “I used to wrestle freestyle, but now I wrestle folkstyle.”

“Folkstyle and Freestyle are extremely different in that they are scored very differently,” Attasauov said. “One major difference is the rules in that when wrestling freestyle, you can lock up with your opponent differently than in folkstyle. You can also throw opponents more in folkstyle.”

However, with Attasauov’s persistence and optimistic mindset, the culture barrier didn’t prove to be much of a challenge for him.

“I love the feeling after practice,” Attasauov said. “Wrestling, or sports in general, are a great outlet psychologically because it clears my head of all problems or stress.”

After high school, Attasauov hopes to bring his wrestling career to the next level. He plans to continue wrestling at a Division I college next year and, in the end, strives to be the next Muhammad Ali. Although Ali was not a wrestler, he is one of Attasauov’s idols. One of Attasauov’s favorite quotes is “work hard, dream big” by Barack Obama. It is a quote that Attasauov has implemented into his wrestling career time and time again.