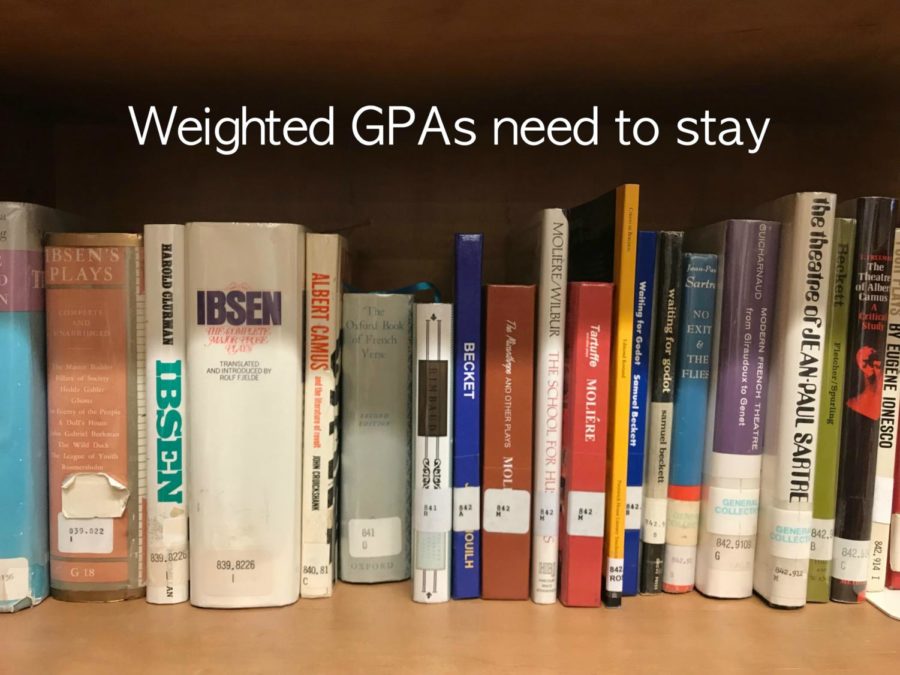 As students at Wayland High School, we are lucky enough to be in an environment where teachers care about both our well-being and our success. Although the changes the school makes in order to keep us happy and healthy are usually beneficial, the latest plan to improve the experience of students will fall short of its goal. The administration recently proposed eliminating weighted GPA and reporting to students only their unweighted GPA. This plan is misguided, flawed and destined to fail.

The school offers two main arguments for getting rid of the weighted GPA. The first is that it will allow students to explore more classes–specifically interesting electives that are not offered as honors credit–without worrying about how those classes will affect their weighted GPA. Although students at WHS do display a reluctance to explore different electives because of how they will affect their college chances, eliminating weighted GPA does not offer a solution to this problem.

The high-level students who would have shied away from college-prep electives will still be unable to take electives that don’t offer honors credit if they want to get into a top school. Those college-prep classes will still appear on a student’s transcript, so they will remain unappealing to high-achieving students.

Not only will college-prep electives remain unappealing to high-achieving students, but without a weighted GPA, students will take fewer risks when it comes to choosing their core classes. A weighted GPA offers a possible benefit to taking an honors class instead of a college class. Honors classes are undoubtedly more challenging than college classes, and students are encouraged to take them for the possible positive effect they could have on a weighted GPA. Without a weighted GPA, there is no motivation for students to challenge themselves in a higher-level class when coasting in an easier class will have the same effect. Students will likely choose an A in a college class over a B in an honors class–especially if the difference in course difficulty is not factored into their GPA.

The second argument against a weighted GPA is that it sends a message to students who don’t take honors classes that they are inferior. But even without weighted GPA, students will still be compared based on the unweighted GPA, and colleges will still take into account the rigor of courses taken when looking at a student’s transcript.

Eliminating weighted GPAs does not eliminate competition among students, especially at a high school as rigorous as WHS. Students with lower grades will still have a lower GPA than students with higher grades. If a weighted GPA sends a message to students who aren’t in honors classes that they are inferior, doesn’t any GPA send a message to students who don’t get A’s that they are inferior?

Despite the WHS administration’s attempts to protect students’ feelings, everyone outside of WHS will still view their academic success the same way regardless of whether their weighted GPA is reported or not. Class valedictorians will still be calculated based on a weighted GPA, and colleges will continue to re-weight the GPAs of applicants based on their own formulas. Eliminating weighted GPA does not make students who take honors classes and students who take college classes academically equal in the eyes of colleges. By withholding information on how the rigor of a course impacts one’s academic record, the school is shielding its students from the reality of their college chances. Students will have an inaccurate view of their own academic record, and will be set up for disappointment when the time to apply for college comes.

The desire to do away with condensing a student’s academic record to one number is understandable, but offering only an unweighted GPA does nothing but provide students with an inaccurate representation of their academic record. The school should use a weighted GPA so that the rigor of a course is taken into account.

There will be a School Committee meeting today, Monday, March 19th, at 7:00 PM in the School Committee Room, Town Building. At the meeting, they will be discussing WHS’ proposal to eliminate weighted GPAs. The meeting is open to the public– attend and make your voice heard.

Editorials reflect the views of the majority of WSPN editors.