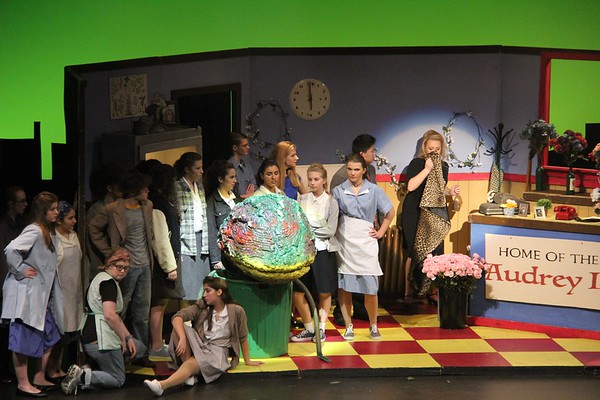 Pictured above is the cast of the fall musical, Little Shop of Horrors, directed by Aidan O'Hara.

The Wayland High School Theater Ensemble has begun preparation for “Almost, Maine,” a play based on a fictional town in Northern Maine. The show is made up of nine different stories that all take place in simultaneously at 9 p.m. on a Friday night.

Each scene will be ten minutes and will be centered around how the characters grapple with their relationships and connections with one another. There are 19 students involved in the production.

Theater teacher Aidan O’Hara has said that the cast will have two goals each day during rehearsal: one being to stage the scenes so the characters can get a feel for the play, and the second focuses on helping the students to develop their character.

“I think these characters are meant to be honest, genuine people. It’s important to give actors time to really develop a three-dimensional person,” said O’Hara.

The theater has less than five weeks until the show dates: May 3rd, 4th and 5th.

Race, identity and community are topics values that METCO alumni are familiar with, and they have inspired a student-written and directed play about race in Wayland.

The Wayland High School Theater Ensemble will be looking at real interviews from METCO alumni taken from the past 50 years. In the play, the students will focus on dramatizing the interviews to get into character.

“The whole intent would be to give 30 minutes original play that hopefully causes the audience to reflect a little on their own race and identity,” said the theater teacher, Aidan O’Hara.

Since the play is an original piece, students are involved in all aspects of the show.

“Every person involved wears all the hats. We have a team of eight students, so we’re all going to be writers, actors, designers and performers. Since everyone plays every role, the result is [that] you have a very strong ownership of the whole piece,” said O’Hara.

Over the next few months, students will be choosing an interview podcast of a METCO alumnus that they have a connection with. WHS history teacher Kevin Delaney and his students are the sources of these podcasts. WHSTE members will then craft a short monologue based on the podcast they choose.

“I think it would be really cool to have a voluntary assembly where classes would sign up to come,” O’Hara said. “You would see the piece, and then stay for a 15 to 20-minute talkback with the cast.”