Opinion: Why I marched in the ‘March For Our Lives’ 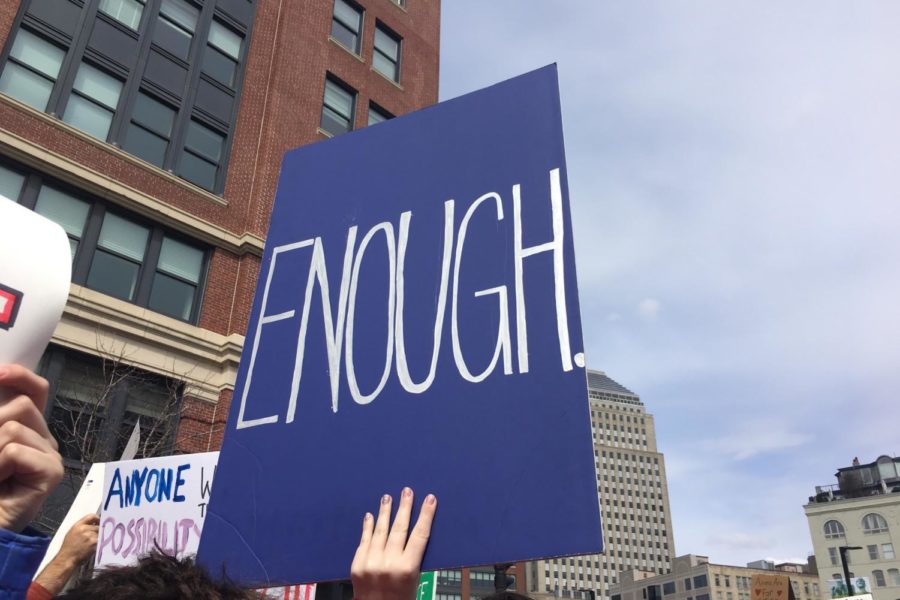 WSPN's Isabel Gitten shares why she marched in the March For Our Lives this past Saturday.

On Saturday, March 24, thousands of Americans participated in the March For Our Lives that took place in many cities across the country. Here in Boston, I joined the 50,000 students, teachers, parents and community members who marched to the Boston Common to bring attention to the issue of gun violence in the United States.

The most important thing I noticed about the march was that it was centered around students. It was empowering to walk down the street and hear adults cheering me and other students on, encouraging us to use our voices and stepping back to let us lead the movement. The most memorable part of the march was when I reached the Boston Common and was ushered into an area with students, where we walked through a tunnel of cheering adults. It was in this moment that I felt like as a student, I had a community behind me and that I could actually make an impact. After walking through the tunnel of support, my friends and I found ourselves in the front section of the rally, surrounded by other kids, just a few feet away from the stage. The energy there was contagious; all of us chanted and danced, excitedly anticipating the speeches. My entire experience at the march was empowering.

I marched because I believe gun violence is an issue in our country. This is not negotiable. The fact is, a person with an AR-15 can do a whole lot more damage than a person with a shotgun or a knife. The accessibility of guns is why America has more mass shootings than other developed countries. We have seen shootings like the Columbine High School shooting, when two 20 year-olds murdered 12 students and one teacher in a school library. We have seen this in Sandy Hook, when a 20 year-old was able to shoot 20 first-graders and six teachers in their classroom. We have seen it in Parkland, when a 19 year-old was able to shoot down 17 high school students and teachers. Twelve dead students at Columbine should have been enough to prompt lawmakers to pass anti-assault weapon legislation, but it wasn’t. Twenty dead first graders should have been enough, but it wasn’t. Finally, after 17 high school students were shot, lawmakers are paying attention and change could be on the horizon. I believe it is our job as students to keep pressing for change after Parkland, and to not let victims of gun violence be forgotten. We cannot let our country move on until there is sensible gun legislation passed that will help prevent powerful guns from getting in the hands of the wrong people. I march because I believe that I will be able to bring the urgency of the issue to the attention of lawmakers.

I am lucky enough to not know anyone who has been affected by gun violence and to not be a victim of gun violence myself. However, because of the easy access to firearms in our country, I am always wondering if I am next. No child should ever feel unsafe in school, period. I never want to have to barricade myself in my English classroom like I have practiced for years during lockdown drills. I never want to have to think about if I should run or hide during an actual ALICE situation. I never want to have to text my parents that I love them one last time like the students from Parkland did a month ago. I never want to worry about my safety in a place where I go to learn, and until we have stricter background checks, limited access to assault weapons and semi-automatic guns, and close the gun-show loophole, I will have to worry about it.

Going forward, I am going to continue to fight for stricter gun laws and do all I can to prevent victims of school shootings from being forgotten. I have grown up in a society that is so used to gun violence that we fear places that should be secure and safe. I am tired of wondering about my safety when I go to school, or the mall, or the movies. After going to the March For Our Lives in Boston, I have witnessed how powerful students’ voices can be when we join together and demand action. For those who doubt the power of my generation: know that we will vote. We will educate ourselves on gun control to understand its complexity. We will not stay silent or let this issue be swept away. To us, this is a matter of life and death. I will continue to stand up for what I believe in, and hopefully one day, I will be able to say that there are no more mass shootings in America during my lifetime.