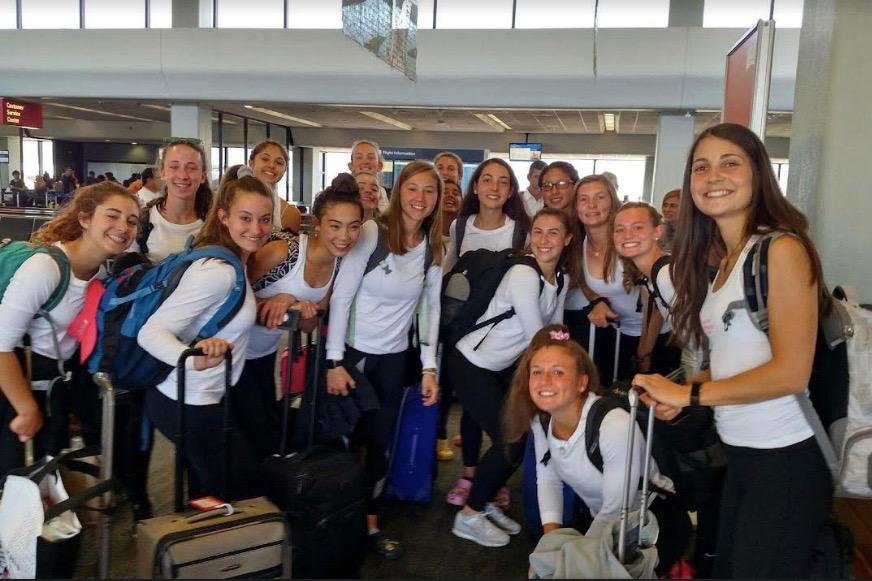 The Wayland-Weston Crew team is en route to Lake Natoma in Sacramento, California to race in the Youth National Championship this June. Juniors Abaigeal Donaldson, Gabby Fargnoli, Kate Maietta and sophomore Jenna Cook describe how their boats prepared for the annual race and how they plan to overcome the challenges that come with being some of the top rowers in the nation.

It’s Donaldson’s first time rowing at Youth Nationals, where she will row in the lightweight women’s eight. Donaldson and the rest of the lineup have been preparing during the past fall, winter and spring seasons.

“I’ve been injured [for part of the season], but our boat has basically been working out all season long and doing pieces together to prepare for nationals this year,” Donaldson said. “Most girls in our boat have not gone to nationals in the past, but we are super excited to go this year.”

The work didn’t stop at the two-and-a-half hourlong practices each day.

“Recently we’ve been practicing every day after school, putting in extra hours before and after practice in our lineup,” Donaldson said. “For the amount of time this team spends together, we’ve become immensely close. We are all a family and we just love to work together.”

“All four of us in the boat have been training really hard since the fall, through the winter [and] into the spring,” Cook said. “We’re all really excited to show what we can do.”

Cook notes that the team’s technical skill and team chemistry are essential contributors to her boat’s success.

“We’ve been focusing a lot on technique,” Cook said. “We’re all really powerful, [so] it’s just a matter of how we apply that power that’s going to make us fast. I’ve grown really close to all the girls in my boat, and we all support each other a lot. I don’t think we would be as successful as we are if we didn’t have such a strong relationship.”

Maietta and Fargnoli are the only open-weight competitors from the Wayland-Weston Rowing Association who will be competing in Sacramento this year. Together, they will row in the women’s open-weight pair, which they have been working on qualifying for nationals in for months on end.

“Preparation started in the fall with how hard we were working toward the Head of the Charles at the end of our fall season, and towards MPSRA’s,” Fargnoli said. “But [training] really started in the winter, during winter training when Kate proposed the idea of us starting to row in the pair and trying to qualify for nationals.”

To prepare for nationals, Maietta and Fargnoli have put a focus on each stroke to ensure the maximization of their athletic ability.

“This season, we’ve just been spending a lot of time in the pair and doing a lot of hard workouts at higher rates and harder pressure, as well as a lot of drills to perfect our stroke,” Maietta said.