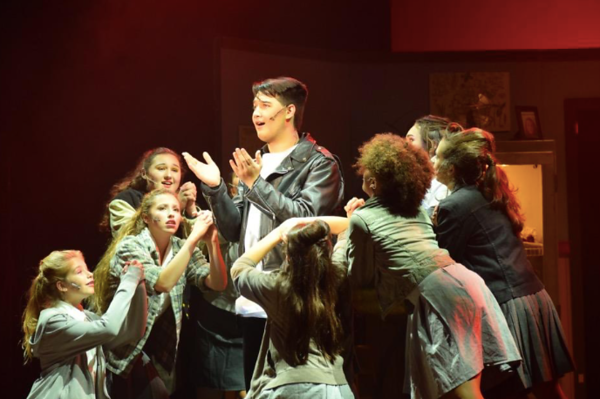 On November 13, the curtains of the auditorium will open for WHSTE’s production of “You’re a Good Man, Charlie Brown: The Musical.” In addition to students performing titular roles, staff members will join the actors onstage to perform in the ensemble.

“[The production] had a really positive impact on the school community, not only on the cast of staff and students, who got to know each other and see different sides of each other, but the audience saw all of the connections that were made on stage,” O’Hara said.

O’Hara hopes that the non-traditional plot of “You’re a Good Man, Charlie Brown” helps convince students and staff to get involved in this production.

“[The production] is based on Charles Schulz’s comic strip ‘Peanuts,’” O’Hara said. “It has that episodic, vignette-like feeling.”

Though there will be difficulties in working with staff who have no theater experience, O’Hara is hopeful for the end product. This means inexperienced staff members will go through structured rehearsals, run lines, practice choreography and learn from veteran student actors. According to O’Hara, seasoned actors often step up and take a leadership role.

“The students bring a wealth of knowledge about different routines on how to participate in something like a rehearsal, but also [help out] during production week,” O’Hara said. “I think the students will emerge as the go-to people for the staff cast members to go to.”

When casting, O’Hara looks not only for talent but for strong leadership skills and a sense of community as well.

“There’s a saying that someone’s audition begins the moment you meet them, so a lot of the people that end up auditioning are in my classes, or [people] I’ve worked with on other projects,” O’Hara said. “Talent aside, I look for someone who will be good in a group or an ensemble, [someone who will] have a warm and friendly personality towards others.”

Even though the Charlie Brown comics are composed of and aimed towards elementary school children, O’Hara believes the meaning runs much deeper than the age of the portrayed characters.

“As far as the material, the comic strips and show, are meant for all ages, and since it’s a cartoon, it appeals to younger kids,” O’Hara said. “But I would say the songs, lines, and lyrics appeal to adults, and I feel like [the material] is very mature.”

The depth of the content was one reason O’Hara chose this musical. The music also has elements of modern day pop music and an energetic feeling that appealed to O’Hara. He also believed that the relatability of the characters’ problems would make the audience connect to the characters onstage.

“When people come to see a piece of theatre, they’re coming from their own lives, they’re distracted, they’re carrying their own baggage, and I feel like this show has the ability to have an impact on the audience,” O’Hara said. “[I think] it will leave the audience not only smiling but reflecting on their own family and friends.”

O’Hara hopes that this production will be as successful as his previous three, but not just in terms of ticket sales. He hopes to bond and connect with students even more, and hopes to share the experience with fellow teachers.

“In each production last year, there were moments where I connected with the cast, crew, and school,” O’Hara said. “It was really heartwarming.”

Tickets can be purchased online or at all three lunches closer to the opening day.