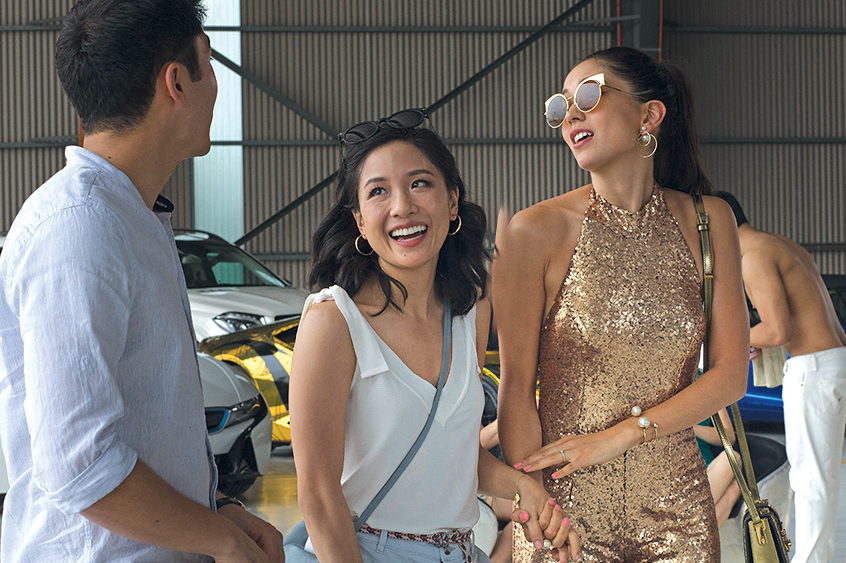 WSPN's Joyce Wu gives her take on "Crazy Rich Asians," the first movie with an all-Asian cast since "The Joy Luck Club" in 1993.

“Crazy Rich Asians” tells the story of NYU economics professor Rachel Chu (Constance Wu) and her trip to Singapore with her boyfriend Nick Young (Henry Golding). There, she discovers that he is the son of one of the wealthiest and most powerful families in all of Asia. Being a mere commoner in a world of rich socialites, Rachel must confront envy, judgment and worst of all, Nick’s disapproving mother, Eleanor Young (Michelle Yeoh).

The scenery and shots in this film were executed beautifully. When Rachel first pulls up to Nick’s house, the most stunning aerial view of Nick’s house and front lawn graces the screen. The house itself is a grand Gatsby-esque mansion, adorned by lush trees, traditional red Chinese lanterns and a fountain filled with sparkling blue water.

Being a story about some “crazy rich” people, gorgeous shots of lavish homes are to be expected. However, not all of the scenes depict an extravagant home or a private island paradise. As soon as Nick and Rachel depart from the airport, they are met with an flood of food from the various vendors of the street markets. This scene depicts Singapore’s wide variety of food and offers a rare glimpse at the common folk and the country’s culture.

“Crazy Rich Asians” also portrays complex characters, making the audience question the boundaries between “good” and “bad” characters. Eleanor Young is first depicted as nothing more than a scornful, steely-eyed villain who will stop at nothing to separate Nick and Rachel, even going so far as to hire a private investigator to dig up dark secrets about Rachel’s family. However, toward the end, the audience realizes that she is just a stern mother doing what she thinks is best for Nick.

The importance of image among wealthy socialites is heavily emphasized in the movie. There are continuous mentions of how “so-and-so wanted to marry her, but the family didn’t approve.” It tackles the issue of marriages pre-determined by arrangement within socio-economic classes rather than “true love.” This mentality in the movie drives the plot, as Rachel was raised in middle-class America by a single mother, which makes her an unlikely pairing with Nick.

For the first time, I went to go see a movie not because I had heard about it through social media or read a really good review about it, but by my parents’ urging. I had never heard my dad speak of something that was trending in mainstream media before, but the enthusiasm in his voice was so overwhelming that I couldn’t help but be excited for this movie’s release. The all-Asian cast had touched not only the Asian-Americans of my generation, but also my parents’, who immigrated from China in 1997. Even though they came here more than 20 years ago, they had never seen an American movie that featured an all-Asian cast. The last film to do so was released nearly 25 years ago in the form of “The Joy Luck Club,” which received relatively positive critiques from audiences all across America and garnered $32.9 million in box office sales.

From Emma Stone playing Allison Ng in “Aloha” to Scarlett Johansson portraying Motoko Kusanagi in “Ghost of the Shell,” Asian representation in Hollywood has been heavily diminished. With the release of this film, director Jon Chu hopes to spark a movement in Hollywood and encourage diversification of future productions. With this film out, he has already set ablaze a campaign which will hopefully inspire more directors to work with more diverse casts.

Although this film may come off as targeting solely an Asian audience, it isn’t. This film shouldn’t be labeled as a good “Asian film,” but rather a good film with an all-Asian cast. The movie is a screening of all of the audience’s wildest fantasies about living lavishly, yet it somehow manages to stay grounded through brutally realistic themes and characters. With its witty humor, charming characters and intricate plotline, “Crazy Rich Asians” is a must-see for all audiences.