Athlete of the Month: Mason Bolivar 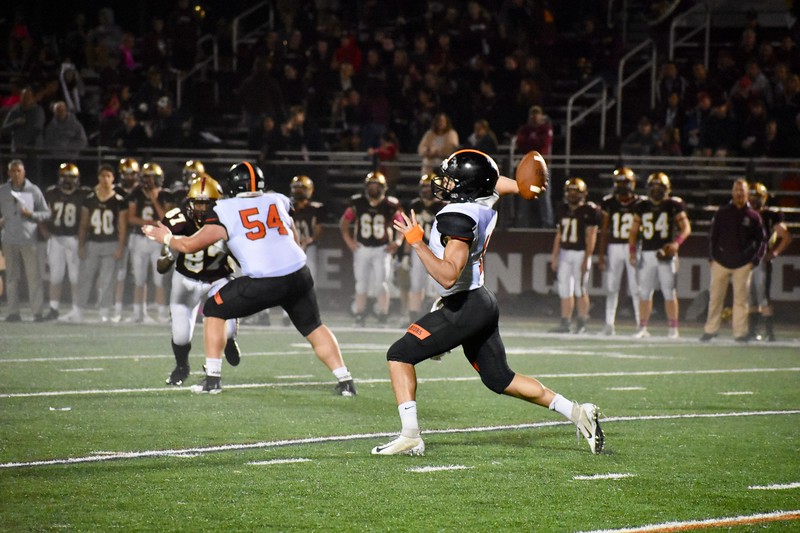 For junior Mason Bolivar, football has always been a fact of life. “I started [playing football] in fourth or fifth grade, and I had always just loved football before that,” Bolivar said.

The player’s eyes scan the field as he firmly grips the ball in his hands. Around him, his teammates clash with members of the opposition, but none of the tussling seems to faze him. Maintaining his composure, he examines the play before him, searching for the right opportunity. A moment later, he spots his chance, winds up and fires a pass. The ball soars through the air in a perfect spiral, landing in the outstretched hands of the wide receiver. The shrill call of the whistle is drowned out by the roar of the crowd – touchdown.

For junior Mason Bolivar, football has always been a fact of life. Even before he started playing competitive Pop Warner football in the fourth grade, Bolivar could be found tossing around the pigskin with his father and two younger brothers.

“I started [playing football] in fourth or fifth grade, and I had always just loved football before that,” Bolivar said. “I’d always ask my dad to play catch and stuff. At first, I wanted to be like [former NFL defensive lineman] Vince Wilfork, so I wore #75, and I was a defensive end, and I thought, this is awesome.”

“There weren’t really any quarterbacks in the grades above us, and I played a little bit freshman year because [Henning] was there,” Bolivar said. “And after he was gone, it was going to be either me or [junior] Jaden [Brewington], so I just worked hard and ended up starting sophomore year.”

Under Bolivar’s lead, the Warriors are currently undefeated in the DCL Small and have trounced opposing squads. They defeated Newton South on Friday by a score of 37-0 and rolled over Concord Carlisle 35-0 the week before.

Thus far, the Warriors have an overall record of 4-1 and are currently on a four-game win streak following their season-opening loss against Hopkinton. Bolivar attributes part of the team’s success to their unrivaled chemistry.

“I think our bond with each other is really strong compared to other teams [both] on and off the field,” Bolivar said. “We just hang out and really enjoy being with each other.”

In addition to Bolivar’s playmaking abilities on both sides of the ball, he shares the field with senior offensive lineman and defensive tackle Brooks Jones and senior running back and linebacker Wellington Pereira. Both Jones and Pereira are considered to be some of Wayland’s better players. Pereira won DCL Small MVP honors last year, while Jones was recognized as DCL Small Lineman of the Year. Bolivar’s praise for them is equally high.

“I feel like very few people on our team have the kind of football mindset that you need to be super good,” Bolivar said. “[Jones] and [Pereira] – I think they definitely have it, and so do a select other few. But to actually be successful in football, you have to have that kind of crazy mindset once you get onto the field.”

Bolivar’s exploits on the football field may not stop in Wayland. Bolivar hopes he can take his talents to the collegiate level in the years to come and hopes his skills on the field will help him secure a place in a college football program.

“I’m really betting on playing in college – that’s what I’m hoping for,” Bolivar said. “I don’t know what [kind of college] I want, local or not. I like [Bentley University]. I want to go to business school, and they have a really good business school and Division II football.”

Despite the scouting attention he has received and his desire to play in college, Bolivar notes that football is ultimately more than just a key to a good university.

“[At the end of the day,] it’s just a way of relaxing and a way to have fun,” Bolivar said.