Mark the ballots at mock midterms on Nov. 5, Nov. 6 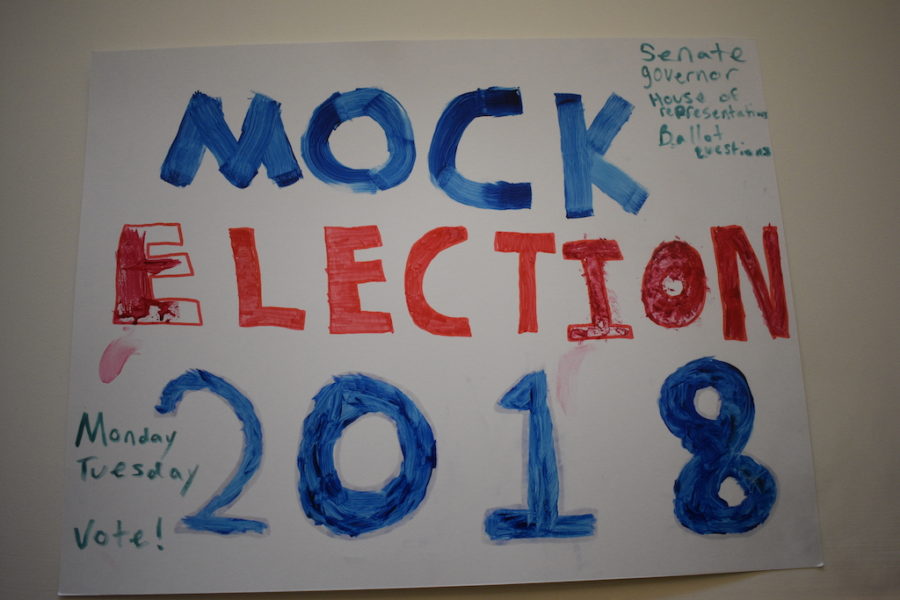 A mock election poster created by A.P. Government students. The class is hosting a mock election on Monday, November 5 and Tuesday, November 6 in the WHS Commons. “I’ve learned so much about how our government works,” junior CJ Brown said. “I’ve also gained insight about what’s going on in the world right now, and I’ll definitely take that with me.”

A mock midterm election will be held during all three lunches on Monday, Nov. 5 and Tuesday, Nov. 6 in the Commons. The voting booths will be run by the AP Government and Politics classes, and paper ballots will be used to ensure security.

Though the elections have been a part of the history department’s curriculum for over 15 years, this year’s results of the governor’s race (Charlie Baker vs. Jay Gonzalez) will be sent to the John F. Kennedy Presidential Library and Museum. AP Government and Politics teacher Eva Urban was contacted by the museum to organize a schoolwide mock election and share the results to see how WHS compares with different schools across the state.

AP Government students will be running the voting booths as part of two projects, which are designed to help students better understand democratic elections and learn how to run a campaign.

“[The students] created informational brochures [that say] what a ‘yes’ vote does and what a ‘no’ vote does,” Urban said. “We’re putting those in the voting booths, which is actually the case when [people] go to vote.”

Students will vote on two different ballots. The first is the governor’s race (Baker vs. Gonzalez), the U.S. representative race (Katherine Clark vs. John Hugo) and the United States Senate race (Elizabeth Warren vs. Geoff Diehl). The second will cover the midterm ballot questions.

The second project the class is working on involves running political campaigns. Each student is assigned a candidate to analyze and run a campaign for. Junior CJ Brown was assigned Republican Geoff Diehl and was surprised at the amount of work that went into running a campaign.

“There’s so much work, so much money and so much more strategy than you would think that goes into a political campaign,” Brown said.

“I had no idea [about] the amount of propaganda that was being used in these campaigns,” Briasco-Stewart said. “It’s been so interesting learning about what really goes on.”

However, the students do not represent the candidate they are researching. Urban’s goal for the project was for students to understand how different candidates run a campaign, regardless of party. The project was not intended to try and convince people to vote one way or another or to advocate for particular candidates.

Rather, Urban wanted to have the class learn how a campaign is run, what strategies are used and what political propaganda looks like.

“I’ve learned so much about how our government works,” Brown said. “I’ve also gained insight about what’s going on in the world right now, and I’ll definitely take that with me.”

Editor’s Note: CJ Brown is a member of WSPN.