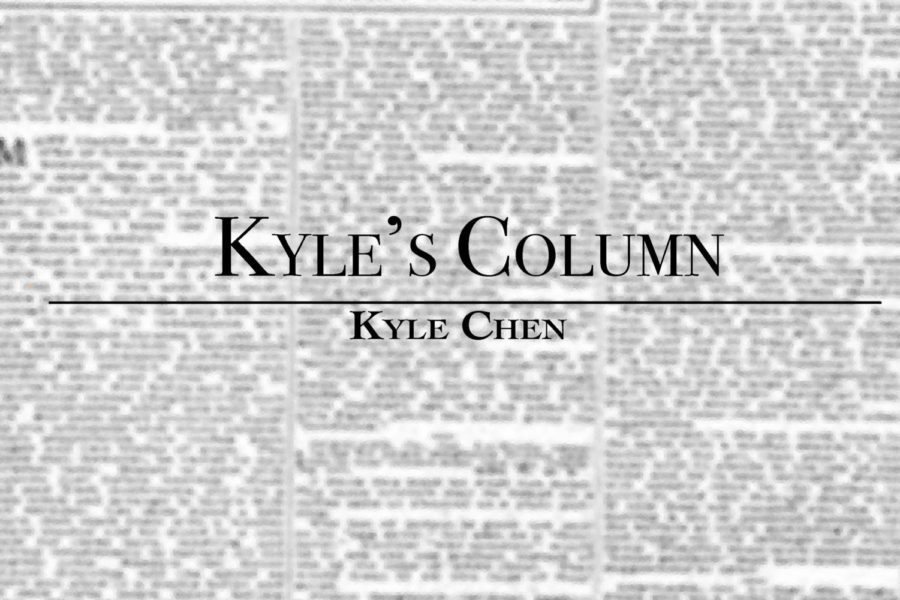 In the latest installment of Kyle's Column, Opinions Editor Kyle Chen reflects upon a friend's struggle with drugs and substance abuse.

Two summers ago, I attended the School of the New York Times, a two-week program in the heart of New York City. I got to spend thirteen days learning about journalism from some of the best in the field, visiting various publications and exploring the streets of the Big Apple.

Through the School, I lived and interacted with a remarkable group of students, united by our common interest in America’s Fourth Estate. But that interest and our proximities in age were the only two qualities we all shared. What really made the program special was the scope of diversity among the people there.

One of my closest friends at the School was a boy named Ryan. On the surface, the two of us would have been an unlikely pair to become friends. On the first day of the camp, Ryan’s mischievous smile and his joyous laugh had already attracted a large circle of friends, while I hadn’t even unpacked my bags yet, much less gone out and made friends with my classmates. Ryan is well-built and athletic. I’m slim and awkward. On any other occasion, we probably would have never even said a word to each other.

As it happened, we only got acquainted through mutual friends. One of his friends became close with my roommate, and pretty soon we were hanging out with each other courtesy of that friendship. At first, we didn’t have much of a connection, but a few days into the camp, we started talking. Eventually, our mutual friends started getting high when we hung out, but Ryan and I both decided to abstain. Soon after, the other kids went off to get high by themselves, and Ryan and I became close friends.

After the program ended, we went our separate ways, Ryan back to the Bay Area and I back to Wayland. But we stayed in touch, talking about school and sports, just like we had back at the School. Ryan kept me posted how he and his old girlfriend had gotten back together, and how college applications were keeping him up at night.

But over time, I noticed that Ryan was getting into stuff he hadn’t been doing before. One night, he posted a video of himself smoking weed with two of his friends. Another time, he texted me late at night, clearly inebriated. Whenever I asked him about the substance use, he would shrug it off, telling me I needed to loosen up, and that it was only a matter of time before I got into drugs myself. At first, I felt uneasy. This wasn’t the Ryan I knew – that Ryan would never touch weed or alcohol. Finally, I decided to confront him and figure out what was going on. When I did, he turned downright unpleasant, taunting me for being such a “goody-two-shoes” and telling me to grow up. Feeling hurt, I stopped talking to him.

Months passed. Then, just about two weeks ago, Ryan broke the silence.

I read the words with a sinking feeling in my stomach. He went on to tell me about how his life had gone downhill in a matter of months. Stress was the cause, he said. From school, from sports, from his girlfriend. It had gotten to him, and he had turned to the artificial bliss of a high to save himself from tough emotions.

“It’s the only way I can make the pain go away,” he told me. “Being sober is unbearable. When you’re sober, the emotions are too much, so you get high to get away from them. And the longer you’re high, the more unbearable being sober becomes.”

Now, he said, the drugs had taken over his life and were slowly ripping it apart. Friends stopped talking to him. His grades dropped. Life itself became nothing more than a haze of dull pain and shattered emotions.

Since that day, Ryan and I have had multiple conversations about his predicament. Every time, he reveals more painful details about his struggle against drugs. Last Thursday, he told me about how he had relapsed after a week of sobriety. Every time, my advice is the same: Don’t go through this ordeal alone. Go to someone, anyone, that you can trust and that can help you. But every time, he says the same thing: I’m alright. I’ve got this under control.

But he doesn’t. I don’t have to be with him to feel the growing pain in his words with each passing conversation. Ryan has reached the point where he’s lost almost everything. Yet, he suffers on, quietly suffocating under his burden. Like many others dealing with difficulties in life, Ryan refuses to seek help.

It’s always hard to face yourself and acknowledge that you have a problem. There’s something about admitting defeat that causes people to recoil, even in their darkest moments. But it’s something that has to be done. Ryan can pretend he’s got the situation under control as much as he wants. But there’s no magical cure that will come and save him. At the end of the day, Ryan can’t face his problems alone. As painful as it may be, the only path to recovery – for Ryan or for anyone in a situation like his – begins with the recognition of and resignation to the fact that they can’t do it alone.