Walkout to be held on Monday 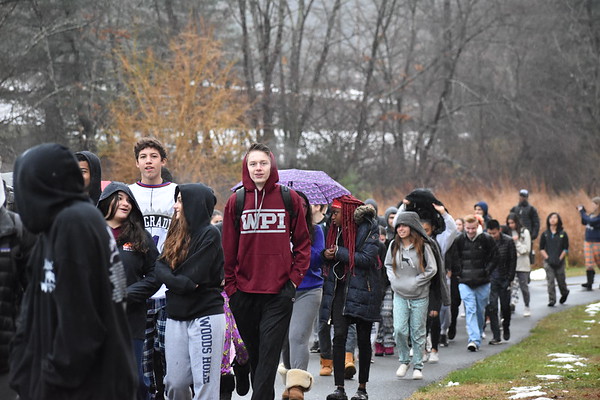 Students talk as they walk around the school.

Students at WHS have organized a walkout on Monday, Nov. 19 to protest the Wayland School Committee’s proposed plans to change the school start times next year. The walkout, initiated by junior Jaden Brewington, will be held at 8:30 a.m. in the courtyard. Participating students will meet in either the media center or in front of the school at the designated time.

“I started the walkout because I’ve seen that a lot of the students in this school don’t want a later start time next year,” Brewington said. “And for the ones that do, they don’t [necessarily] agree with the two proposals.”

According to Brewington, the proposed change in school start times is unnecessary and will not result in any net benefit for the students.

To spread awareness about the walkout, Brewington called upon two of his friends, fellow juniors Michayla Mathis and Shawn Bernier. Mathis and Bernier organized an event on Facebook, inviting as many students as they could. In total, over 300 students were invited to participate via the Facebook group.

“[Mathis] and [Bernier] organized the [Facebook group],” Brewington said. “They added all the people that they knew. But I’ve also talked to a lot of people, and a lot of them have decided they are going to show up. I also started a petition, and [as of Thursday, Nov. 15], I had 205 kids on that who said they would participate in the walkout.”

In addition to recruiting students through the Facebook group, Brewington sent out an email on Friday, Nov. 16 encouraging students to join the walkout.

“This walkout is one last attempt to change the School Committee’s mind,” Brewington wrote. “All are welcome to attend!”

“Students have a right to express themselves until it disrupts school, and the walkout will be a disruption because it results in missed class time for participating students,” Mizoguchi wrote. “Students who are late to class are subject to their teachers’ typical expectation for arrival, and students who miss more than half of a class would [receive an] unexcused [absence].”

In response to Mizoguchi’s email, Brewington sent another message to the student body, reassuring students that as the organizer of the protest, he would take full responsibility for any consequences.

According to Chapter 71, Section 82 of the Massachusetts General Laws, students have the right “to assemble peaceably on school property for the purpose of expressing their opinions,” provided that their protests do not “cause any disruption or disorder within the school.”

In this case, the administration has deemed the walkout to be a disruption. Thus, students’ rights to protest do not protect them from punishment.

Despite the potential consequences, junior Emma Sheehan still plans on participating in the walkout.

“It worries me that fewer people might participate now [as a result of the potential punishments],” Sheehan said. “But I still think it’s an important cause.”

For Brewington, who is a member of the METCO program, the issue of the start times has a personal significance. If the changes are implemented, some METCO students may not be able to return to WHS due to complications with transportation to and from school.

The walkout coincides with the School Committee’s meeting, which will take place on Monday night at 7:00 p.m. at the Wayland Town Building’s Council on Aging. At the meeting, the committee plans to vote on a plan for start times for the 2019-2020 school year. Brewington hopes that the protest will cause the committee to reconsider their decision.

“I’m hoping to get a large amount of students to partake in [the walkout] and to be able to go to the meeting that night and show [the School Committee],” Brewington said. “Hopefully, they’ll see that more than 70 percent of the school doesn’t want [the change], and hopefully they won’t go through with it. Even if I’m not here next year, I want to make a change for the kids that are here after me.”