Grieco is lone dissenter in 4-1 vote 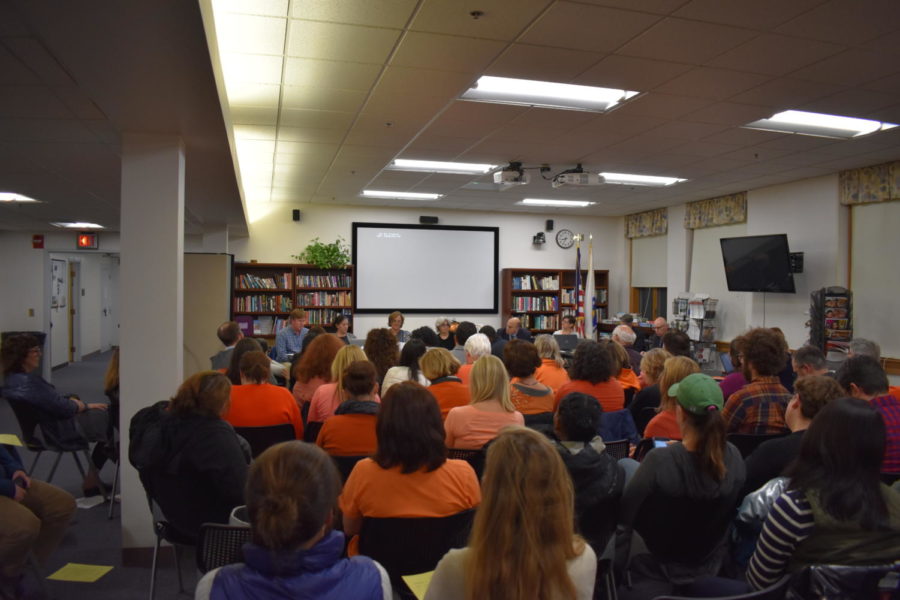 Teachers, parents and community members gather in the senior center of the Town Building at the School Committee Meeting on Monday, Nov. 19. The committee voted 4-1 to revise school start times; as a result, WHS classes will start at 8:35 a.m. next year. "I think it’s pretty clear that we’re making the right decision," School Committee member Kim Reichelt said.

School Committee Chair Jeanne Downs and members Kathie Steinberg, Nate Buffum and Kim Reichelt voted in favor of the change, while Vice Chair Ellen Grieco was the lone ‘no’ vote.

The meeting started at 7 p.m. on Monday, Nov. 19 and did not come to a vote until nearly 10 p.m. Concerned residents, parents and district teachers, the latter of whom wore orange to argue against the change, packed the town building senior center.

“[The committee] needs to do an analysis of the tradeoffs,” Science Department Head Ken Rideout said. “Teacher support is vital.”

For about the first two hours of debate, the committee heard public comments from those both for and against the change. Parents and teachers alike brought up concerns ranging from athletic start times to the health of elementary students.

Some residents were wholeheartedly for the change.

Walsh, mother of senior Meghan Walsh, is a pediatrician. She noted that there is a nearly universal consensus in the scientific field that secondary school students are lacking in sleep. Because of this fact, Katie Walsh believes, no more studies will be done in the future to either corroborate or disprove any hypotheses.

Other residents believed the Committee should take more time to consider all options.

“There are way too many outstanding issues,” said Alexia Obar, parent of senior Abby Obar and sophomore Will Obar.

Obar noted that in Weston, where the School Committee chose to push back start times, athletes are being dismissed early from school on a routine basis to attend games. She furthered that because 80 percent of students participate in athletics at WHS, a large portion of the population would be affected.

In explaining their votes, what ultimately became the four-member majority cited the research and expert knowledge garnered by the committee, the Center for Disease Control (CDC) and the American Academy of Pediatrics (AAP).

Calling into the meeting, Steinberg argued the lack of sleep high school students are getting is indicative of a larger trend.

“This is the modern-day smoking issue,” Steinberg said. “There is a serious health risk from sleep deprivation.”

Downs, Buffum and Reichelt were likewise firm in their support.

Downs thanked the public for submitting public comments and emails, both for and against the change.

“We read and digest everything,” Downs said. “Whatever the outcome, we will work very diligently to implement a change that is very thought-out.”

“We should try to take the time to have the same degree of confidence [with elementary student sleep studies as we did with those of high schoolers],” Grieco said.

The vote comes on the evening of a student walkout organized by junior Jaden Brewington. Brewington believes that the decision is a narrow-minded one that only takes into consideration the needs of Wayland resident students and not Boston ones.

For a detailed background on the issue, check out News Editor Kevin Wang’s article on the start time debate.

Check back for updated coverage on how the committee and Superintendent Arthur Unobskey choose to implement the time change.