Nick Smith: You have to know that you’re going to make a save 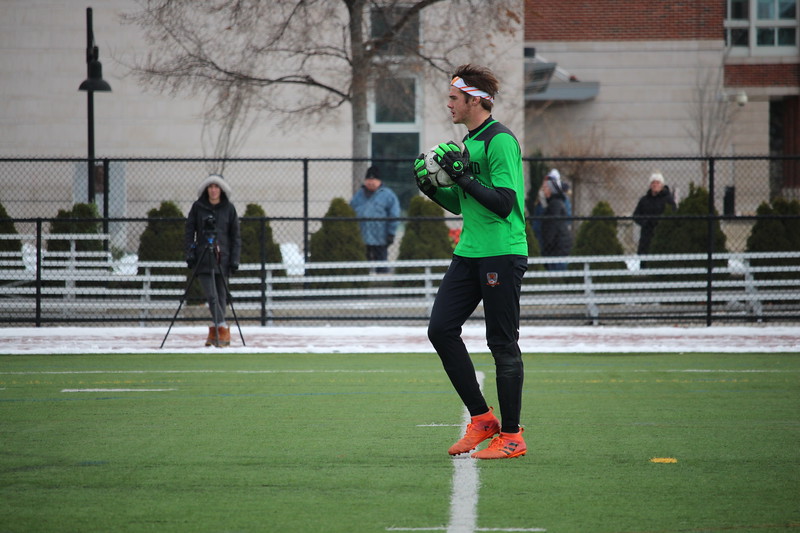 Senior goalie Nick Smith stands on the goal line and surveys the field before him. This season, Smith helped lead his team to win the Division 3 State Championship. "Everything came down to that moment," Smith said.

Senior goalie Nick Smith has been a key member of the boys varsity soccer team for the past two years. In 2017, Smith helped advance the Warriors to the sectional semifinals. In 2018, his exceptional effort in goal led the Warriors to win the Division 3 State Championship.

Smith started playing soccer in the second grade. However, he wasn’t always a goalie. Smith fully transitioned to keeper in eighth grade.

“Honestly, a big part [of my transition to goalie was] just because I was never technical enough with my feet to play in the field,” Smith said. “But I loved soccer and wanted a fall sport to play, so I decided to try [it]. With my height, I guess it should’ve been the obvious positional choice, and it turns out I was decent at it and I liked it, so I kept playing.”

Smith got decent playing time on varsity during his junior season, but was subbed out when games went into penalty shootouts. He came out of the 2017 season with new goals for his senior year. He was determined to be the starting choice for penalty kicks, to go into double digits in shutouts and to win the state championship. Smith’s hard work in the offseason helped him to achieve his goals.

“Over the summer, I played in the Twilight League [which consisted of] games [on] Monday and Wednesday nights,” Smith said. “We would [also] have captain’s practices, and sometimes [I would] go shoot around at the turf with some of the [other players].”

Smith believes that confidence is key to success when playing a position like goalie, as it’s a high-stakes and nerve-wracking position.

“You have to know that you’re going to make a save to really be able to make it,” Smith said. “If you’re doubting yourself or you’re in your head too much, that could cost you precious split seconds in reacting to the shot.”

In his 2018 season, Smith proved his talent, as he came out victorious from not one, but two shootouts in playoffs, one of which was the State Championship game. Smith considers his state championship save to be the proudest moment of his 2018 season.

“Everything came down to that moment,” Smith said. “And thankfully, I made the right choice in direction.”

Smith’s senior season proved he was a force on the field. He achieved all of the goals he set for himself prior to the season. He ended with an impressive record of 10 shutouts, and a .543 goals against average.

Despite Smith’s outstanding performances on the soccer field, he will not be pursuing soccer in college. However, he may play at the club level.