First such instance in team history 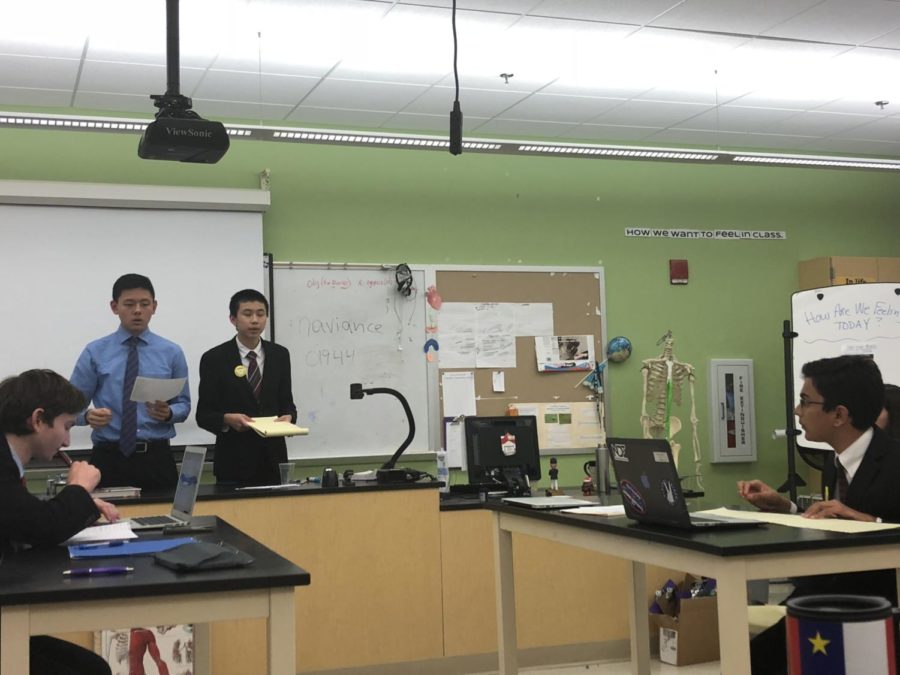 Senior captain Andy Wang (second from right) and his sophomore partner Atharva Weling (right) debate against Lincoln-Sudbury juniors Jesse Sun and Brooks Howell. The two Wayland debaters acquired a silver bid to the Tournament of Champions at the Tim Averill Invitational in Manchester-Essex. “I’ve done debate for four years and I was a failure for the first three, so now it feels good to have something under my belt,” Wang said.

Two students from the WHS Debate team recently earned the school’s first silver bid to the Tournament of Champions (TOC). Senior co-captain Andy Wang and his partner, sophomore Atharva Weling, have collected one out of two bids necessary to compete in the national tournament held at the University of Kentucky in April.

In order to earn a silver bid, debaters must advance through five to seven preliminary rounds at a tournament. In public forum, the debate event that Wang and Weling participate in, teams of two from each school are randomly paired against teams from other schools. If a certain record is earned, which usually amounts to one or two wins above breaking even, then the debater “breaks,” meaning they advance to the elimination rounds. The number of elimination rounds a team needs to win in order to acquire a silver bid varies from tournament to tournament.

Wang and Weling won their silver bid at the Tim Averill Invitational tournament at Manchester-Essex Regional High School. Their debate topic was the United Nations Convention on the Law of the Seas.

“It felt great to be the first kid from Wayland to bid to nationals,” Weling said.

Behind the silver bid was a lot of work and effort. Weling and Wang spent countless hours throughout the season preparing their debate cases, as well as practicing outside of school.

“After I did terribly last year, I went to debate camp [over the] summer to [improve],” Weling said. “Before the tournament [where] I earned the bid, Andy and I did a lot of preparation: writing cases, blocks and [running] practice rounds against our teammates.”

Putting in the work is not the only difficult aspect of Debate. Team members are challenged to work with new students who they may not have known prior to Debate, which can cause problems with team chemistry. However, this was not the case for Weling and Wang.

“Andy and I just work together really easily,” Weling said. “It’s all about communicating well and being on the same page during rounds, and we’ve managed to do that well enough.”

After four years on the Debate team, Wang says he’s glad to finally have accomplished something significant in his eyes.

“I’ve done Debate for four years and I was a failure for the first three, so now it feels good to have something under my belt,” Wang said.