Athlete of the Month: Tali Wong 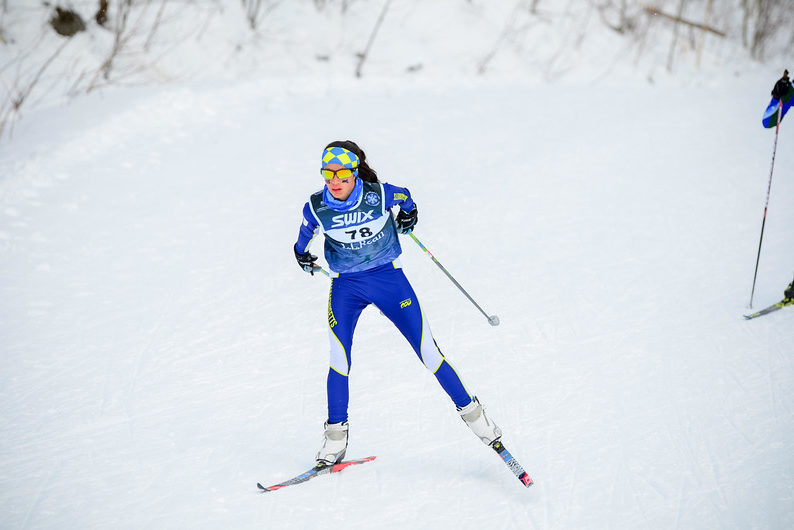 Sophomore Tali Wong finishes a race at the Eastern High School championships. Wong has been competitively Nordic skiing since the third grade. "The races end up being around 5 miles, so you have to be able to race and go fast for an extended period of time which is really hard," Wong said.

Sophomore Tali Wong’s winter consists of five-mile races through a course that requires hours of endurance and is covered with ice and powdery snow. Most winter athletes practice within the comfort of a rink or a gym, but Wong faces new challenges with every ski course.

Nordic skiing, also known as cross-country skiing, is nothing foreign to Wong, who began skiing in third grade. Wong has also been on a variety of Nordic ski teams.

Latching onto the skis and going for a daily stroll around the track is nothing close to the fitness required for Nordic skiing. This sport takes far more conditioning than what meets the eye.

“There’s a huge endurance part of it,” Wong said. “The races end up being around five miles, so you have to be able to race and go fast for an extended period of time, which is really hard.”

Wong’s sports idols push her to succeed. When someone thinks of sports icons, Tom Brady or LeBron James may come to mind and not usually skiers. For Wong, this is not the case. Wong’s idols consist of world-famous skiers.

“There’s this skier from Norway named Johannes Høsflot Klæbo, nicknamed ‘Klæbo,’” Wong said. “He’s a really young skier, but he’s like the best in the world. Usually, skiers are better in their late 20s to early 30s, but he’s only 22 and is dominating.”

Wong is already nothing short of successful at WHS, and she has only competed at the high school for one season. Wong had an incredible freshman season at Wayland High School, ranking fourth in the league and placing 22nd at states. She hopes to continue this success by beginning her preparation for this season’s races.

“My first races aren’t until January, so for now, it’s just training,” Wong said. “Hopefully, we’ll get on snow soon.”

Wong has not only brought success to the WHS Nordic ski team, but she has also skied successful races for teams around the state.

“I’ve been part of the U-16 Massachusetts team and the EHS Massachusetts team, which is the high school team,” Wong said. “I raced at the Eastern High School championships with Vermont, New Hampshire and Maine. That was a really big race.”

Nordic skiing can be physically daunting but also fun. Wong feels there are many positives that come with the sport, which is why she has stuck with it for so long.

“There [are] a lot of different parts of [Nordic skiing],” Wong said. “The races are really fun, but they’re intense. It’s a lot of adrenaline. The people who do it are really fun, and it’s nice to ski with other people.”