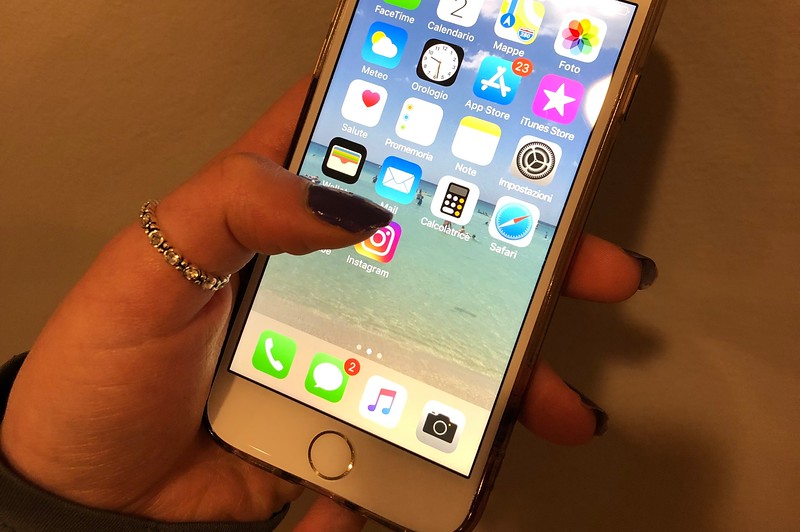 Joy Mayer offers her advice on using social media effectively. “Are you being intentional about what you communicate about yourself?", Mayer said. Mayer's expertise can be applied to the social media platforms used by students as they mature.

A simple ring of a phone call, text message or Snapchat has the power to make a person stop in their tracks to respond, look down from their steering wheel and grow anxious not knowing who is trying to contact them. As a matter of fact, 95% of texts are read within three minutes of being sent.

About a year ago, I decided to delete my Snapchat account because I felt that I was spending too much time obsessing over it. I kept over 50 streaks- when two people send each other Snapchats back and forth continuously for more than three consecutive days- with people I wasn’t close friends with, and whom I never talked with outside of “streaks and recents.”  Every day, I would receive a single snapchat from 50 people. I would return a picture of my ceiling or the wall, and we went on about our days, not thinking of each other until the next morning when we had to send out streaks again. I realized that there was no real point in me having an account, so I got rid of the app.

After being off Snapchat for about one month, I came to the realization that it was a waste of time. Instead of hanging out with my friends, I had been scrolling mindlessly through the app, watching videos about people’s vacations and seeing pictures of people’s fancy dinners. But guess what? I had no interest in what those people were doing throughout the day, but I was addicted to Snapchat, so I looked anyway.

Fast forward to mid-November, when I had three tests to study for and an essay due the next day. The smart thing for me to do would have been to drag myself into my room and study, but instead, I was wasting my precious time (and ultimately losing sleep) watching Youtube. As I went from one video to the next, I came across a man who gave up social media for a month to see the effects on his daily life. I felt inspired by this video, so I decided to give it a go. Before I could change my mind, I deleted Instagram from my phone.

So there I was, sitting in my bedroom by myself, without Snapchat and without Instagram.

The first few hours were difficult for me. I realized the excessive number of times I would unlock my phone, hover my thumb over where the Instagram icon used to be, then remember that there was nothing there. I would check five minutes later again and ten minutes after that. What was I hoping to see, anyway?

When my alarm went off the next morning, I immediately reached for my phone so that I could check Instagram to help wake myself up. Unfortunately, when I unlocked my phone, Instagram was still gone, nothing to check: no memes, no DM’s, no new people requesting to follow me, just the sound of the rain outside and the aroma of coffee coming from the kitchen.

After two weeks of being in the dark and not knowing what my peers were posting, I started to miss Instagram. I had a burning desire to just scroll through, even if it was only for a few minutes, to see some of the most recent posts.  I remembered all of the fun photos I wished I could post, craving the instant gratification of the red hearts that appear in the activity section of Instagram.

One afternoon, while I was doing my homework, the thought of Instagram suddenly popped into my head. Maybe if I check just this one time, I contemplated in my head. I knew it was a bad idea: if I peeked, I could lose myself and relapse into my addiction again. Unfortunately, I didn’t listen to myself, and I logged in on my laptop. My eyes were instantly glued to the screen as I scrolled through several days worth of posts.

It was amazing, really, how my brain was mesmerized so easily by Instagram posts; all thoughts about my chemistry homework were instantly forgotten and my stress was instantly alleviated.

But then, I snapped out of it. ‘What are you doing, Caterina!?’ I thought to myself.  I logged out and haven’t logged back in since.

I can truly say that my life has been better without the influence of social media. I no longer gravitate to my phone when I have friends over, and lunchtime is much less boring when I interact with my peers face-to-face.

I strongly encourage you to do the same as I have. I promise you that, although it’s challenging at first, and sometimes you have major FOMO, it’s worth it. I began to realize how silly the trend of social media really is. Many of my friends tend to take breaks from our conversation to quickly check their Instagram feed, and it can surely make somebody feel like they are less important than what’s on the screen.

Even if you can’t bring yourself to delete the app entirely, you could try to scroll through less per day. Based on my experience, being disconnected is great.