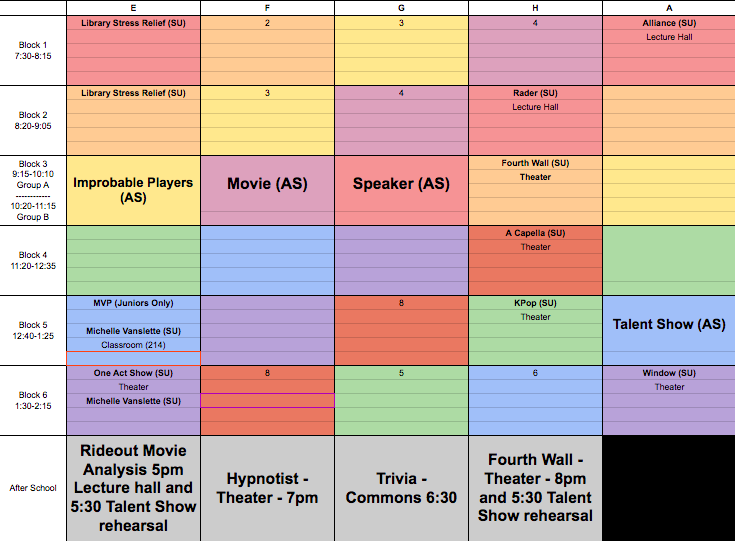 Editor’s Note: As student council has not completely finalized the Winter Week schedule, the following events are subject to change, and this article will be updated as the council adds additional events, labeled “UPDATE.”

Fifth block: Juniors will participate in an MVP discussion regarding safe drinking, driving and partying.

After school: Science Department Head Kenneth Rideout will present the cultural dynamics and stereotypes displayed in Beauty and the Beast.

Third block: WHS Student Council will decide Wednesday, Jan. 23 on an all-school movie. According to Student Council President Amanda Armstrong, the movie will be both thought-provoking and entertaining, with hopes that the majority of the student body has yet to watch it.

After school: Hypnotist Peter Gross will return to the WHS auditorium at 7 p.m. on Jan. 29 for a hands-on show. Armstrong encourages students to attend, as Gross has included his audience in the show in the past.

Third block: Rev. Mariama White-Hammond serves as the Minister for Ecological Justice at Bethel AME Church in Boston and will be speaking to WHS students. She will be talking about her journey to becoming a minister and climate justice activist, as well as the importance of being an activist in today’s society.

After school: Students are invited to participate in a game of trivia, which will likely be held in the theater according to Student Council Secretary Andy Wang.

Second block: Teachers will be able to sign up for a presentation run by Scott Rader. Rader works to turn patient-imaging CT scans and MRIs into virtual reality and 3D-printing.

Fourth block: The WHS a cappella groups will entertain the audience with a variety of songs.

Fifth block: The after-school K-Pop club will provide the audience with a performance that has been worked on throughout the school year.

After school: The Fourth Wall is a music and dance ensemble group that the Fine Arts department recommended to come. The group will perform Thursday, Jan. 31 at 7:30 p.m. in the WHS auditorium.

Second and third block: Students will perform at the WHS auditorium and show off their unique skills and talents. Armstrong encourages the student body to come and discover new things about their peers.

Fifth block: The Window Dance Ensemble will perform eight dances that they have been preparing since December. They will perform a variety of styles including lyrical, temporary, ballet, jazz and hip-hop.

Sixth block: WHS students will be performing a one-act show for the student body.