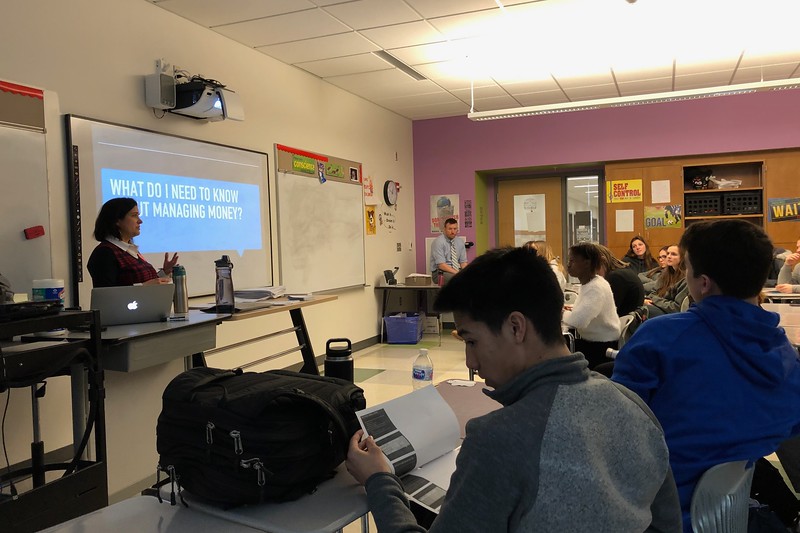 To prepare WHS seniors for their upcoming adult lives, Michelle Vanslette gave students a presentation including a various amount of tips for living in college and how to properly take care of personal finances on Monday. "I don’t think they know enough when they go away to college about personal finance and just some life skills in general," Vanslette said. "I just wanted them to be aware at least, and even if they just learned one thing out of the class, I think it’s worth it."

Michelle Vanslette came to WHS during fifth and sixth block on Monday to discuss essential skills for adult life and share knowledge about college for students.

“When you graduate from high school, you have a lot more freedom but also a lot more responsibility,” Vanslette said. “And so I just wanted to talk a little bit about that responsibility that goes along with the freedom.”

In high school, many students’ parents take care of their finances and help them cook their meals. College, however, is a different atmosphere, one in which students can’t rely on that help anymore. Vanslette discussed many tips about a variety of subjects, including financial success in college and laundry.

Access to such information is something that students are often not very familiar with until college. Vanslette’s classes offered students an opportunity to learn about everyday adulthood.

“I think [this class] has some good common sense information that [students] won’t get [in high school],” English and Latin teacher Ed DeHoratius said. “I know [that] my own kids were able to add something down after [being taught about] this stuff. I think that if the parents don’t do it, it’s a good place to get it here.”

Many of the seniors who attended the class were able to take away information that could guide them later in life. With college right around the corner, many students learned some helpful tips for their upcoming new lives.

“I thought [the class] was really helpful since I didn’t know much about money or anything like that,” senior Emily Hanania said. “I’m [also] going to be needing to do this by myself in college in a couple of months.”

At the beginning of the class, Vanslette discussed her personal journey with finance and entrance into college life. Her father died when she was at a young age, and her mother had to learn [how] to take care of their money, something she hadn’t had to do before. Vanslette’s mother suggested that she learns about finances, advice that she took to heart. Vanslette is now an accountant.

“I thought [the class] was really important for kids,” Vanslette said. “I don’t think they know enough when they go away to college about personal finance and just some life skills in general. I just wanted them to be aware at least, and even if they just learned one thing out of the class, I think it’s worth it.”

Overall, the class was able to cover lots of ground on some basic life skills for upcoming students going into college. Many of the students who entered the class were able to come out having learned something new.

“I would recommend this class [to other students] because I always thought that homemade classes were something that would always be useful in high school,” Hanania said. “Especially leading up to college, this class gave me a little bit of insight into that.”