Athlete of the Month: Ryan Nolan 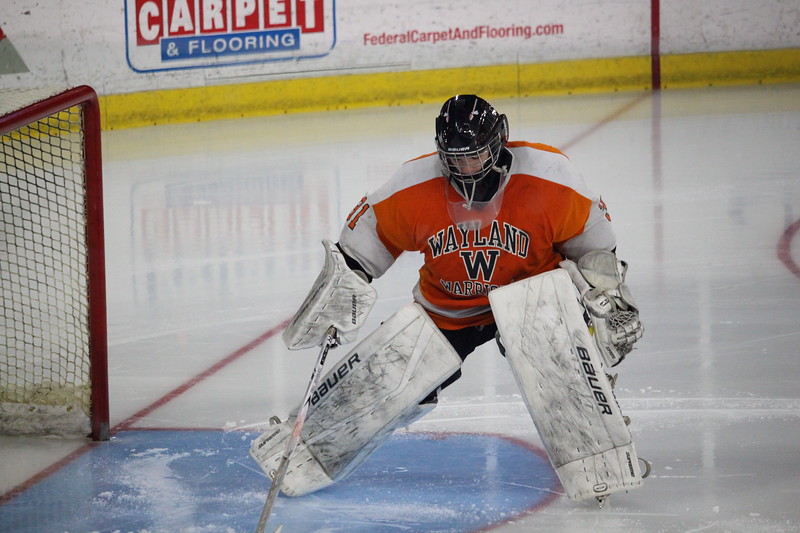 Boys varsity hockey captain Ryan Nolan defends the net during the North Finals. "There's always people that are doubters that say we can’t do it," Nolan said. "I like proving them wrong." Nolan and the team are motivated by playoff aspirations.

For boys varsity hockey senior captain Ryan Nolan, hockey has been a fact of life for a big part of his life. In his final year of playing on a high school team, Nolan stepped up into a leadership role as a captain. Nolan continues to surround himself with the sport year-round.

“My dad played hockey, [and] everyone in my family plays hockey,” Nolan said. “I was forced into it I guess, but I was happy about it.”

Nolan’s family, job and free time are filled with hockey. Nolan is part of a summer team and a fall league, and he also works at a local hockey rink.

“I play on a team year-round,” Nolan said. “I’m always around the game, and it’s a really good experience for me.”

Although Nolan plays goalie for the Wayland boys varsity hockey team, he wasn’t always in net. Nolan originally played other positions until his coach tried him out in net when the team was in need of a goalie.

“The goalie on my team got scared of the puck, [and the coach] needed someone to put in net, so he ended up putting me in and it just kind of stuck,” Nolan said.

According to Nolan, he considers the team’s victory against Algonquin, the No. 2 ranked team, to be a big success of the 2018-19 season. Nolan and his teammates defeated the T-Hawks by a score of 1-0.

“It was our first shutout of the season,” Nolan said. “I thought that was a pretty good win for us.”

As a captain, Nolan has to focus on the team on and off the ice. Part of Nolan’s role as captain is acting as a leader for his teammates while also protecting the net.

“I remember last year, [playoffs were] big for us,” Nolan said. “It was a really good time, and we’ve got seven points left to make it this year. I’m looking forward to making it.”

Winning and losing aren’t the only things that matter for Nolan and his teammates. Nolan’s leadership also consists of camaraderie with his teammates.

“I try to be there for my teammates,” Nolan said. “We’re a really close bunch; probably closer than a lot of other teams. We just do our best to try and be a team and work together and get things done.”

Following his graduation from WHS this spring, Nolan will attend the University of Massachusetts Amherst and hopes to continue his hockey career there. Whatever the future brings, Nolan plans on playing hockey on a team while in college.

“I’ll try out for the club team for sure, [but] if not, I’ll play on some other team,” Nolan said.