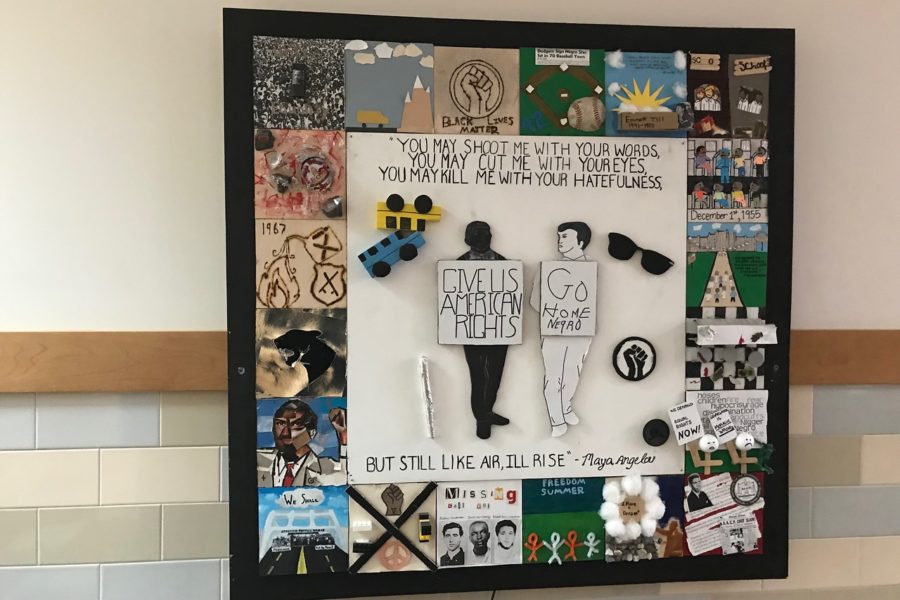 A board that represents black history in the WHS history wing. The collage depicts what life was like for an African American during the black power movement. This year, the WHS POWER club is working with the administration and Student Council to bring Black History Month to the forefront of students' awareness. “In previous years, we haven’t done anything,” POWER Club president, junior Shawn Bernier, said. “That’s why I felt that this year there definitely needed to be some type of change or implementation [of something new].”

Throughout the month of February, people living in America celebrate Black History Month, in which people learn about African American history and celebrate the achievements of African Americans. Instead of letting it slip under the radar, the WHS POWER Club is working with the administration to bring black history to the forefront of students’ minds this year.

“In previous years, we haven’t done anything,” POWER Club president, junior Shawn Bernier, said. “That’s why I felt that this year there definitely needed to be some type of change or implementation [of something new].”

WHS METCO Coordinator Mark Liddell took notice of the change and increase in general awareness about Black History Month among students. He commends the current administration for working alongside the POWER Club and Student Council to help raise awareness of Black History Month.

“I can’t stress enough the idea that the current administration has been extremely supportive of the students in these efforts and that they, in conjunction with the Student Council, have found opportunities in the last few years to have black history acknowledged in some way,” Liddell said.

In the past, Liddell notes that there have been efforts made to teach black history during Winter Week. This year, Student Council continued that tradition of teaching black history via their Winter Week schedule, which was enhanced with various activities that were designed to bring attention to the upcoming Black History Month.

“Over the years, we’ve had various people come in and present topics that were relevant to black history,” Liddell said. “[This year, we] had a number of events [including] the speaker during Winter Week, Reverend Hammond, [as well as] the showing of ‘Hidden Figures.’”

This year, in addition to the multitude of Winter Week events devoted to teaching black history, Bernier and the rest of POWER Club are reading quotes from influential members of the black community. Many of the speakers are well-known, such as former president Barack Obama, the Rev. Martin Luther King Jr. and actress Whoopi Goldberg.

“I figured that if we were to [feature] pretty well-known African Americans or people of color in the morning, then it could hopefully impact someone’s life for the better,” Bernier said.

Bernier made sure to use quotes that are impactful to the students. He hopes the announcements will supplement the school’s curriculum surrounding Black History Month.

“I find the quotes that are well-known and could embody the idea of what the school is trying to reiterate to the students,” Bernier said.

Bernier sees the quotes as a way to bring both awareness and motivation to the rest of the school.

Aside from the daily quotes, information about allies to the black community is sent to the student body via email by POWER Club’s political advisor, junior Allyson Christian, on Mondays and Fridays during the month.

“I chose to send out emails because a lot of the kids at this school don’t know what an ally is, and I want to educate them,” Christian said. “I chose [to feature] people that are unsung heroes. You might have seen a picture of them or maybe even heard their name, but you never knew what they were doing behind the scenes.”

Christian’s goal is to incite contributions to the black history movement. She hopes her emails will greatly influence WHS students.

“My goal for this club is to help educate the Wayland community about the black history movement,” Christian said. “I’m doing this to try and change the perspective of the kids at Wayland.”

Through her emails, Christian also hopes to resolve negative behavior as well as promote positive discussions regarding race and diversity.

“There’s a lot of ignorance that has gone underneath the rug and a lot of things that have happened that nobody brings up,” Christian said. “I feel like that’s also the problem with Wayland. We need to start talking about what’s going on instead of letting people continue to be ignorant.”

Bernier sees announcing the quotes not only as a way to teach black history, but also to foster amicable conduct among WHS students, ultimately resulting in everyone going through their day in a more positive and happy way.

“Those types of things can impact someone’s life,” Bernier said. “If they’re having just one sad moment, that trail of happiness will keep reciprocating.”