Abby Gavron: Softball opened my eyes to the leader I can be 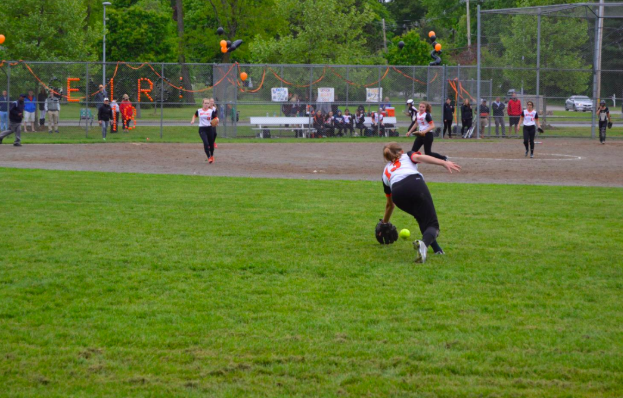 Sophomore Abby Gavron dives for the ball on Senior Night. Gavron will be a captain of the softball team her sophomore year. “I played center field a lot because the other captain is a catcher. Coach [Hipolito] Rivera taught me how to play catcher, and he really pushed me to be better. I am thankful for everything that he taught me because he helped me become the high school athlete that I want to be,” Gavron said.

For many sophomore athletes, the spring season means junior varsity – less pressure from coaches as well as fewer competitive games. For sophomore Abby Gavron, however, that is not the case. Gavron has played for the varsity softball team since her freshman year. This year, she has already stepped up as team captain.

Softball is no new sport for Gavron, as she has been playing since fifth or sixth grade.

When Gavron started playing softball when she was in elementary school, she didn’t know what position she wanted to play or even how to play it.

“All the girls who were on the team had been playing for a long time and knew their positions and where they belonged on the field,” Gavron said. “They didn’t have a catcher, so I just decided to step up and play catcher.”

Gavron’s middle school softball coach was a huge part of the player she is now, and he also taught her much about the game and the catcher position.

“One of the people who has inspired me the most is coach [Hipolito] Rivera from middle school,” Gavron said. “Coach Rivera taught me how to play catcher, and he really pushed me to be better. I am thankful for everything that he taught me because he helped me become the high school athlete that I want to be.”

As Gavron began her high school softball career, the influence of a great coach in her life continued. Head coach and Assistant Athletic Director Erin Ryan has had a positive impact on Gavron’s softball experience at Wayland High School.

“I first met [Ryan] when I was eighth grade,” Gavron said. “She would come to some of our games to scout us or just see how the middle school team played. I feel like she’s really been an important coaching figure and adult in my life because I am always able to talk to her, and she really mentors me and makes me into a better softball player. She is one of the reasons that I am a captain.”

Every grade has a lot of players that play a certain sport. The sophomore class has quite a few girls that play softball, and Gavron is one of many sophomore softball players.

“[Our grade] has brought a huge number of softball players to the school,” Gavron said. “Last year, the freshmen brought an overwhelmingly big enough number of players to help them form two teams.”

Gavron hopes to carry the feeling of family from her other sports to softball as she goes into her sophomore season as it is something that is very important to her and something that she carries from team to team.

“I want the team to be really close and be like a family,” Gavron said. “All of my other sports teams I played on were really close. Like for soccer and basketball, you get really close with your teammates, and I really hope that happens for softball this year.”

While fostering a close-knit team throughout the season is a priority for Gavron, she also wants to focus on winning games and improving.

“[I hope to] improve as a team,” Gavron said. “We’re going to lose some people, but we’re also going to gain some people. [I] just [want to] improv[e] the program as much as we can.”

The goal that Gavron, Ryan and the other captains have set for the team overall is a little different than coming together and winning a few more games than last season.

“Historically, Wayland softball hasn’t had the best record, and it’s because [the teams that we play are] a lot more advanced and [are] bigger schools,” Gavron said. “Our goal is to hopefully make the playoffs even if we don’t make it far. Just to make the playoffs would be huge.”

Even though Gavron is only a sophomore, her role as a captain is as important as that of senior captain Allison Leacu.

“[Leacu] and I were friendly last year, and she was always nice,” Gavron said. “I also think that we’ll work together really well to help the team. There a lot of older kids on the team, and it’s going to be hard to try and lead them, but I think I’ll be able to encourage everyone to be better and be a good captain.”

While it’s rare for a sophomore to be a captain of a varsity team, to Gavron, it means more than wearing the “C” on her jersey.

“It opened my eyes to the leader I can be and how important it is for me to be a leader for the [team],” Gavron said. “Because I’m in this position now, it’s going to help me grow and become a better captain as the years progress.”