Athlete of the Month: Michael Lampert 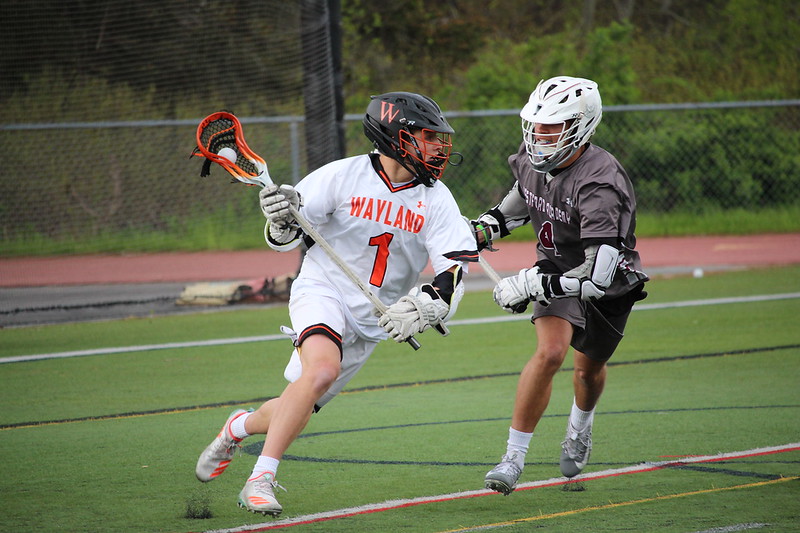 Boys varsity lacrosse captain Michael Lampert cradles the ball as an opposing player attempts to steal the ball. He runs while using his size to his advantage, looking for an opening to throw the ball for a play. “I would say my biggest challenge has been people doubting my size,” Lampert said. “I have overcome this by doing extra workouts to show people that I can use my size to my advantage.”

Senior Michael Lampert recently became the top scoring player ever to play lacrosse at Wayland High School. In fact, Lampert’s love of lacrosse even predates the existence of Wayland’s youth lacrosse league, so when Lampert first decided to start playing lacrosse, he had to venture outside of Wayland in order to fulfill his dream.

After learning and refining his skills in lacrosse through the Lincoln-Sudbury youth lacrosse program, Lampert eventually took his lacrosse skills back to Wayland, where he is now the captain for the boys varsity team.

“It’s been an honor to be a captain and to lead the team,” Lampert said. “I think being named captain is a great honor in any sport because that means the players look up to you. You have to think about your actions on and off the field because people will follow what you do.”

Quite recently, Lampert earned the title of top scorer in Wayland boys lacrosse history. This means that he has scored more points throughout his career playing for WHS than anyone else in the school’s history. Lampert earned this title by breaking the record previously held by Jimmy Lampert, his older brother and a WHS Class of 2016 alum.

“It means a lot that I broke the record, and I’m happy I did it,” Lampert said. “I wish it was someone else’s record I broke, but [my brother] is very proud of me, and I know I couldn’t have done it without him. I knew I wanted to break this record once my brother broke it. [I spent extra] time after and before practice and workouts, which helped me achieve this goal.”

However, Lampert’s experiences haven’t all been smooth sailing. Aside from the victories like breaking his brothers all-time scoring record, he has faced the problem of people doubting his abilities due to his size.

“I would say my biggest challenge has been people doubting my size,” Lampert said. “I have overcome this by doing extra workouts to show people that I can use my size to my advantage.”

While there are many facets to the game of lacrosse that appeal to those seeking a thrill, lacrosse also provides a community.

”I like lacrosse because it is a physical fast moving game that provides the sense of brotherhood at the same time,” Lampert said.

This sense of brotherhood is a very important aspect of a team for Lampert. He feels that teamwork is always critical to have among players because it helps promote the team’s wellbeing.

“Our team dynamic is great,” Lampert said. “We all care for each other, and we enjoy going to practice everyday, and hanging out with each other, which makes games and practices that much more fun.”

After beating the record for top scoring player and becoming captain of the varsity team, it’s only fitting that Lampert will continue to refine his talents on the field in college.

“I plan to play Division I lacrosse [in college], and next year I am going to a prep school called Brewster Academy,” Lampert said.