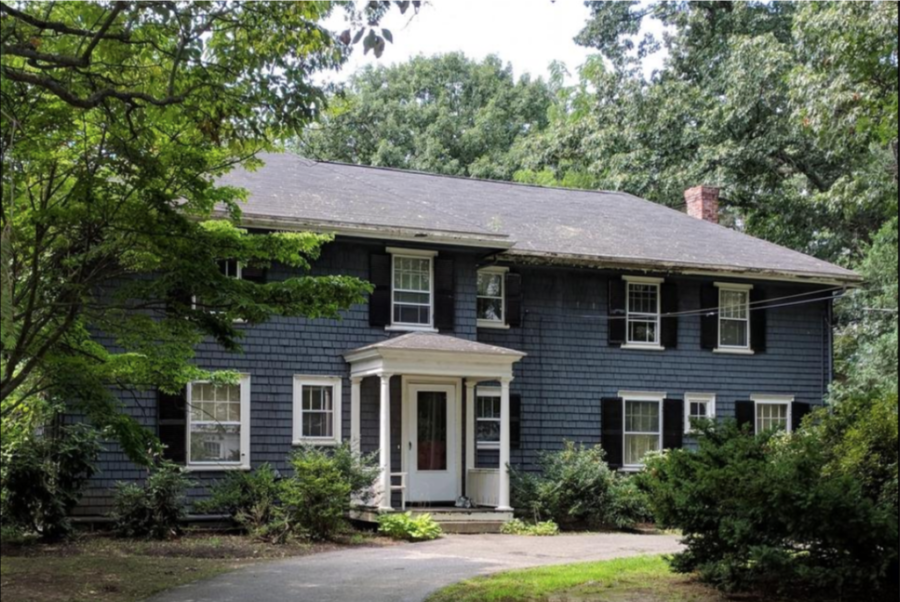 The Trinitarian Congregational Church's former parsonage was built in 1903 and had been unused for seven years before its demolition. The Town Crier published a letter written to them by the Wayland Historic District Commission (WHDC), which expressed the WHDC's “extreme disappointment” with the demolition of the former parsonage and Ewing Building. “Once these buildings are demolished the historic fabric that makes up our community is altered forever,” the WHDC wrote in the letter. “The demolition of two historic houses, particularly, the former TCC Parsonage, known historically as the William H. Sayward, Jr. House, seems so short-sighted and insensitive to the heritage of our community.”

The decision to raze two historic buildings in the Wayland Town Center has set off a contentious relationship between local preservationists and the Trinitarian Congregational Church.

The Trinitarian Congregational Church’s former parsonage, built in 1903, and former Ewing office building, built in the 1920s, were two historic buildings in Wayland. Both were demolished to allow for a new green space and ten new parking spots for the church.

Four years ago, 80% of the Trinitarian Congregational Church (TCC) voted in favor of demolishing the two buildings. The Ewing Building had been unoccupied for three years and the former parsonage for seven years, and both were in disrepair. According to TCC Pastor Kyle Smethurst, the buildings required a lot of maintenance, something the church wasn’t able to sustain.

“Overall, it came down to [maintenance],” Smethurst said. “Both [buildings] needed hundreds of thousands of dollars in repairs, which was pretty tough and something that the church wasn’t able to invest in along the way.”

The church also owns another historic building, Bradford Hall, Wayland’s first high school. According to an article on Patch.com, the town awarded the church $80,000 under the Community Preservation Act to restore Bradford Hall’s boarded-up windows, chipping paint, and balcony. When it was purchased by the TCC in 1978, the hall served as a meeting place for church members and today it is a space for youth at the church.

Some preservationists in Wayland are unhappy with the decision of demolition by the church.

“[Historic buildings] tell us about our history and the history of this town, how people in the past lived and how it affects us today,” Wayland Historical Commission member Elisa Scola said. “If we lose [historic] buildings, they’re irreplaceable, they can’t be replaced. That style of building is no longer being made.”

Gretchen Schuler, chairwoman of the Community Preservation Committee and chair of the Historic District Commission, told the Town Crier that she believes the buildings were a key piece in understanding how Wayland has changed over time.

“The (demolished buildings) are historical resources to the town center in terms of showing the development of our community,” Schuler told the Town Crier. “Losing these resources is losing part of the story to tell people about this development.”

The Wayland Historic District Commission (WHDC) wrote a letter to the editor that was published in the Town Crier to “express its extreme disappointment” with the demolition.

“Once these buildings are demolished the historic fabric that makes up our community is altered forever,” the WHDC wrote in the letter. “The demolition of two historic houses, particularly, the former TCC Parsonage, known historically as the William H. Sayward, Jr. House, seems so short-sighted and insensitive to the heritage of our community.”

Over the course of the three years between the church voting to tear down the Ewing Building and former parsonage and the day of demolition, TCC and the town had discussed uses for the buildings as an alternative to razing, which the church declined because of worries about the ability to use the property in the future.

“Suggestions rejected by the TCC include affordable housing via a required long-term lease to the town or a housing consortium that would rehabilitate the properties to create three to four units of affordable housing; short-term refugee housing; and office space for one of the town departments needing short-term space,” the WHDC wrote.

According to Smethurst and Foster, the TCC approached the town to move the buildings onto another property as another course of action to avoid demolition. The town, however, declined.

“There were a couple of proposals made, and as a matter of fact, after the church had voted that they wanted to tear those buildings down. We offered both buildings to the town,” Foster said. “If the town wanted to take the buildings, they could move the buildings from that property, at their expense, to a property that was owned by the town. The most recent offer was to move the Ewing to the [neighbor’s property].”

As well as the buildings being in disrepair, the Ewing Building and former parsonage no longer served a purpose for the TCC after the offices were moved into the church building in 2016. But the church is optimistic about the new open space.

“[It is dedicated] to be a community green space, where we hope it could it be a great resource for people in the future, and we’re excited about designing that,” Smethurst said. “[We had to think about] how we can still use this space to serve the town.”