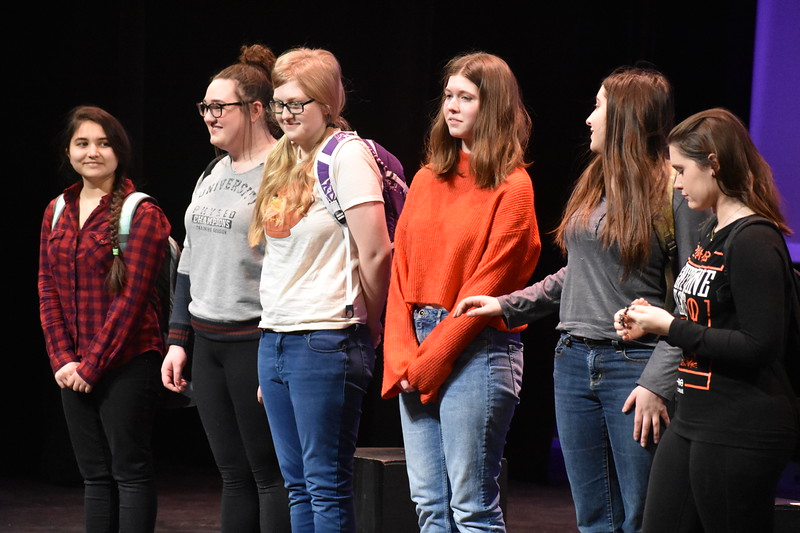 Members above are preparing to bow after the finale of their one-act show, "Out Loud." This show was performed during Winter Week this past year. Four one-act plays will show on June 11, all directed by seniors.

On Tuesday, June 11, four members of the Class of 2019 will be presenting their one-act plays that they both wrote and direct. The plays will be presented at 7 p.m., and tickets will be sold for $5 at the door. The show will consist of four short plays that are directed by seniors Amelia Brodney, Lizzy Francis, Nathan Hochberger and Anika Reichelt.

Junior Arden Knapp will be starring in the short play, “Nervosa,” written and directed by Francis. Although Knapp doesn’t usually act, she was recruited by Francis after becoming close during a cappella.

“This year, I became really close with Lizzy through a cappella, and I know that she is really into directing and writing plays, so she asked me to audition,” Knapp said. “[After] she convinced me to go to the audition for a bunch of different plays for the senior [one-act] shows, I auditioned for her play, and I got a part.”

Knapp will be playing an important role, for the play revolves around an important topic: anorexia. Since the play is about a significant matter, Knapp has to be careful in how she perceives her character.

“The play is about a teenage girl named Lydia who has recently been diagnosed with anorexia, and she is in a group home,” Knapp said. “It’s about her journey and what happens while she is there.”

Knapp, along with the rest of the cast, has been rehearsing since the end of May. She’s most excited to see how the play turns out.

“I am most excited to just see the whole thing come out,” Knapp said. “We have a lot of really good actors and actresses, and I think that everybody has been working really hard, so I am excited to see the outcome.”

Be sure to come out to WHS on Tuesday night to check out the four plays: “The Fall of the House of Usher” directed by Hochberger, “Eurydice” directed by Reichelt, “La Mouche” directed by Brodney and “Nervosa” directed by Francis.