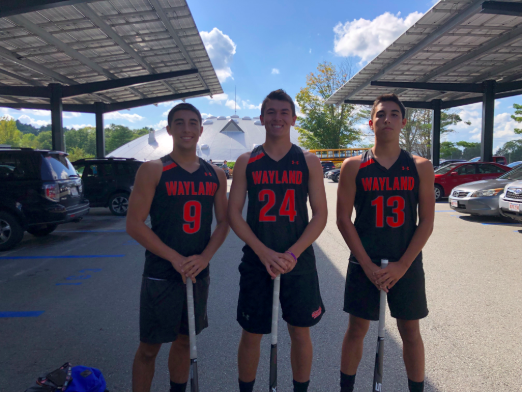 Seniors Ethan Betancourt, Aiden Chitkara and Zeke Betancourt sport their field hockey uniforms. The boys are on the WHS varsity field hockey team, which is historically female-dominated. "I’m really trying to win the DCL and get back to playoffs and hopefully win a state championship," Chitkara said.

Around the world, field hockey is predominantly a male sport. But, in the United States, it is more common to see females choosing to pick up sticks and hit the field. Seniors Aiden Chitkara, and Zeke and Ethan Betancourt decided to go against American social norms and try out for the WHS field hockey team this fall.

“At first, it was a little weird. I kind of knew what I was getting into [and] that I’d be one of the only guys,” Chitkara said. “It’s not the most popular thing to do, but I really wanted to give it a shot because I think field hockey is a dope sport. I [also] wanted to play a sport with two of my best friends, Zeke and Ethan Betancourt.”

Like Chitkara, Zeke Betancourt was initially concerned about how he would interact and fit in with the team. However, his worries went away as the season started, and he has since bonded with the team as a whole.

“I thought it’d be weird because I didn’t know any of the girls besides [a few], [but] it’s fun getting a different perspective of teams and the difference between guy-sport teams and girl-sport teams,” Zeke said. “I like it a lot. I didn’t think I would, but I like it.”

A co-ed field hockey team is uncommon in the United States, but the varsity field hockey coach, Shelly Fraser, grew up with boys playing the sport and was very supportive of the boys joining the team.

“Coming from South Africa, I have grown up with field hockey being a co-ed sport,” Fraser said. “So, when the captains came to me at the end of the school year last year and let me know there were three boys thinking of joining, my first response was, ‘Are they taking it seriously, or are they turning it into a joke?’ If they are taking it seriously, then I am really excited to have an opportunity to have boys back on the squad.”

Although having boys on the team is a new concept for all of the current players, it is something that Fraser has had in Wayland before.

“This is not the first time that I have coached boys on the varsity field hockey team,” Fraser said. “Back in 2002 and 2003, there were three boys: Rich Trueblood, Class of ’03, Sam Heller, Class of ’04 and Zach Freundlich, Class of ’05. Zach actually went on and represented the under-21 men’s USA field hockey team.”

The team happily welcomed the boys onto the team and accepted the changes that come with the new members.

“It certainly changes the dynamic, but, if anything, it’s been for the better,” senior captain Fatma Sayeh said. “Having the boys pushes every single girl to try harder.”

Adding boys to a girl-dominated team can change the dynamic, but, in this case, it has encouraged a change among the entire team in wanting to work harder in its season.

“I feel it has ignited a spark amongst the girls to want to do better this season,” Fraser said. “The boys are all-in and want to do really well, thus encouraging the team to want it too. I feel like it may make the team more of a family.”

Not only have the boys encouraged the team to work harder and help the dynamic, their perspective has allowed for everyone to develop into stronger players.

Because the boys just picked up the sport this summer, they have found learning all of the minor rules quite challenging and hard to adjust to.

“The biggest surprise was a lot of the rules, and we didn’t know any of the rules,” Zeke said. “Like not being able to lift the ball, shoot outside the circle, hit it with the back of the stick or hit your foot. A lot of those are hard to adjust to, especially since I came from soccer.”

Sayeh made sure to work with the boys consistently throughout the course of the summer to make them feel comfortable with the sport and with some of the other players. Now that they are on the team, the captains wanted to make sure that the boys were being integrated with the girls and are working with them to make a smooth, co-ed team dynamic.

“One thing I do on purpose is if we go into teams or groups of three, I make sure the boys are split up and make sure they are working with other girls so that everyone is working together rather than having the boys by themselves all the time,” Sayeh said.

Another challenge that the boys have come across is the difference in aggression in boys and girls sports. Generally, boys sports allow for more physical contact, while referees in girls sports would call fouls for that same level of physicality.

“A challenge would be they’re not really familiar with girl rules in sports, like aggression,” Sayeh said. “Boys have a lot more leeway in being aggressive in sports, but in field hockey, you can’t be as aggressive. Of course, you still should try to be [aggressive].”

“I kind of knew from the beginning that I could really be an impact player and help the team a lot because [it] didn’t have a great season last year, I think [it] went 2-18,” Chitkara said. “I’m trying to win the DCL and get back to playoffs and hopefully win a state championship because that is my goal this year.”

Chitkara has spent his entire life playing ice hockey, and this year he will be a captain of the boys team. He feels that his background gave him an edge when he started playing field hockey, but it wasn’t a piece of cake from the get go.

“Unlike ice hockey, you can only use one side of the stick, so that is differently a big learning curve and really hard to adjust to,” Chitkara said. “I just get frustrated and I want to use the other side, but I think it definitely helps because my stick skills have gotten polished quickly.”

Although the boys are respected as part of the team, Sayeh has concerns about their credit on the team from an outside viewpoint.

“A challenge is for people to think that with boys we have an advantage,” Sayeh said. “[But] we have a team of 18 and 15 girls who are also putting in as much work as the boys are, so I don’t want [the boys] to get too much credit because the girls have been playing for [longer], and they work just as hard.”

Because most field hockey teams in the league are comprised of all girls, bringing boys to the field adds an element of excitement and surprise for the other team.

“Showing up to other schools with three boys is so intimidating, but it’s also so exciting,” Sayeh said.

The boys certainly have noticed the impression they leave when first walking on the field. Not only does their nonconformity surprise their opponent, they also surprise other sports teams around them.

“I have only had [two] game[s] so far, but it’s pretty hilarious to walk in and see [the look on] everyone’s face as they just see three dudes in the back of the line as they’re walking out to the field,” Ethan said. “As we were walking to Newton South’s field, the girls soccer and [boys] football team looked and pointed, ‘There [are] three dudes.’”

The season has only begun, so the team has a lot more room to learn and develop. Fraser is happy with the results of the games thus far and hopes that people will come and watch the new team dynamic unfold on the field.

“I am really excited about the way the season has started,” Fraser said. “We do have a long way to go, but, right now, it is really good living in the moment and riding a happy bus home. I would highly recommend people to come and support the team on the road and watch the magic out on the field. It’s great to have the opportunity to coach boys alongside the girls again. My biggest regret is that they didn’t start earlier.”