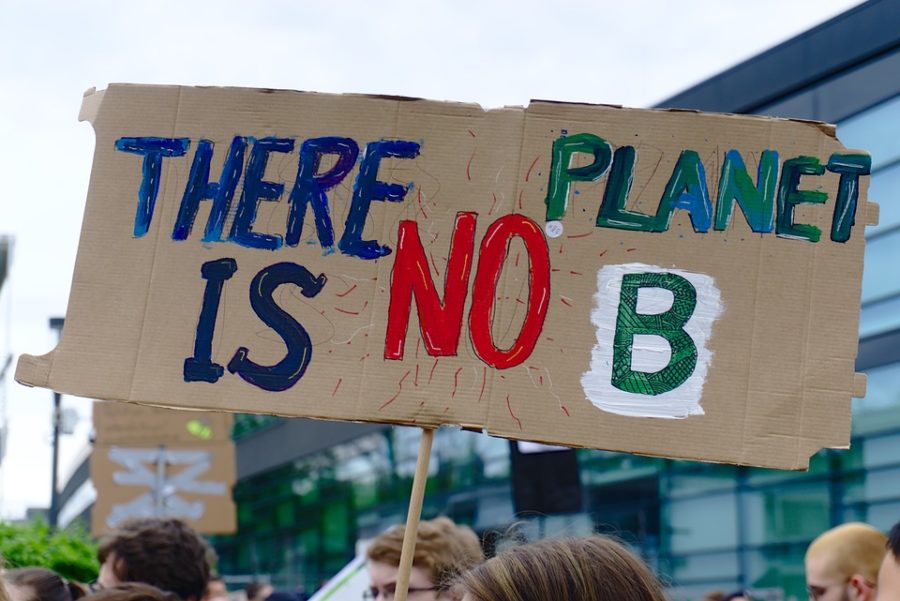 Students hold signs protesting climate change. WHS students will walk out of classes to participate in the global climate strike to be held in Boston on Friday, Sept. 20. “We live in a place where we’re not really seeing any consequences for climate change,” Freshman Serena Field said. “It’s very easy for us to believe that it’s not relevant to us. But when you’re joining in something global like [the climate strike], it’s easy to see that it’s not just about us - it’s something so much bigger.”

WHS students will walk out of classes to participate in the climate strike on Friday, Sept. 20, in Boston. The strike is a global protest inspired by the actions of 16-year-old Swedish climate activist Greta Thunberg. Protesters across the US and around the world will take to the streets to demand action to address the climate change crisis.

The strike found its way to WHS through the efforts of freshman Serena Field. Field, who is new to the Wayland public school system this year, has been involved with climate strike organizers in Boston since the beginning of the strike’s planning.

“[The planning for] Friday’s strike for climate started to take place in March,” Field said. “I met the lead for Boston this summer, and she told me all about it. I started getting involved in August. We’ve had many meetings since then, and we’ve gone on the streets to spread flyers and try to get people on board.”

As a school ambassador for the climate organizers, Field felt strongly about bringing the strike to Wayland. To do so, she reached out to English teacher Sara Snow, who heads the WHS Green Team, and enlisted the help of sophomores Emily Chafe and Joanna Barrow, as well as other WHS students interested in assisting in planning for the strike.

With the assistance of Snow and a group of WHS students, Field sought to establish a practical plan for the transportation of students to and from Boston on the day of the strike. Students walking out will be participating in an event that is not school-sponsored, meaning they will have to figure out their own modes of transportation. However, without the support of the administration, the logistics around getting to and from the protest have proved difficult to resolve.

“Right now, we have 21 seats in people’s cars for students attending the protests,” Field said. “[The people driving] are mostly parents so far. I will be meeting with the Connect program, and I will try to get some of the seniors [in the program] to help drive students as well.”

Additionally, the fact that the protest is not a school-sponsored event means that students who walk out may face consequences. As the protest will take place during school hours, participating students who miss classes will be given cuts or marked absences, unless they receive an excusal from school by a parent or guardian, per the WHS attendance policy. The decision not to make the protest school-sponsored was carefully deliberated upon and discussed by the WHS administration and faculty.

“There’s an interesting tension here,” WHS Principal Allyson Mizoguchi said. “On one hand, we want to encourage students to be civically engaged. On the other hand, we also want students to consider, when you want to protest something or when you feel strongly about an issue, what changes about that protest when there are consequences.”

From Snow’s perspective, such considerations are important for students who wish to participate in the strike. Inherent in a student’s participation in a protest is a disobedience to authority, an aspect that accounts for much of the protest’s power.

“I wanted to be supportive [of the protesting students] but at the same time I wanted to make it very clear that this was their strike,” Snow said. “I wanted them to be aware that they were essentially standing up against people like me – those in positions of authority, be they parents, teachers, fossil fuel companies, politicians, whoever they saw as being the person that was not dealing with the climate crisis.”

Despite the potential consequences that protestors may face by walking out, Field remains hopeful for the success of the climate strike and encourages WHS students to participate and stand up for what they believe in.

“We live in a place where we’re not seeing any consequences for climate change. There is nothing really changing around us,” Field said. “It’s very easy for us to believe that it’s not relevant to us. But when you’re joining in something global like [the climate strike], it’s easy to see that it’s not just about us – it’s something so much bigger.”