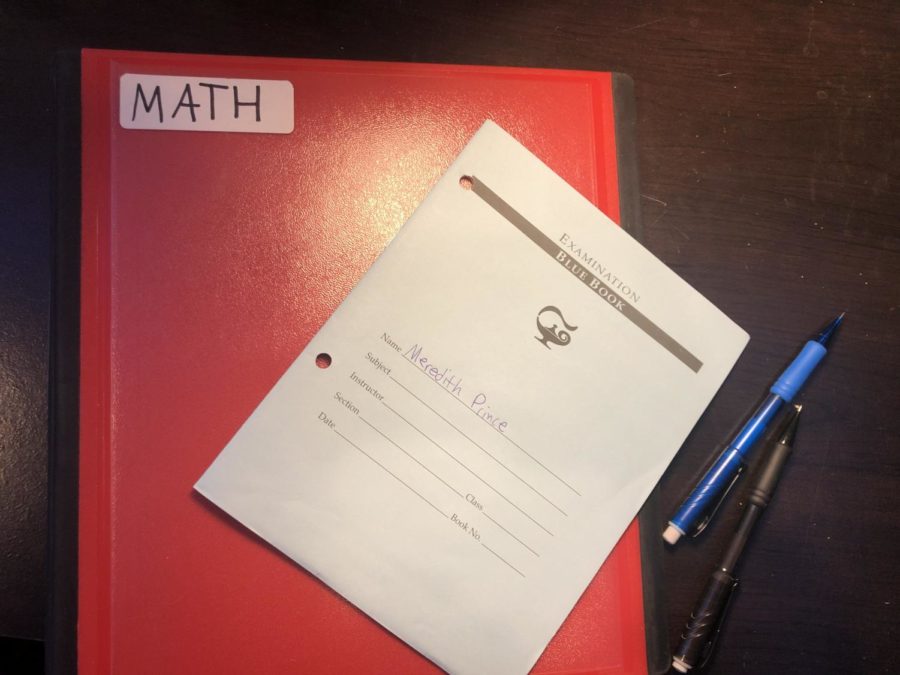 The math department now distributes blue books or reflection sheets where students can write skills they need to work on and reflect on their tests. However, students still are not allowed to keep their math assessments. “We want to continue that idea of getting kids to think about what types of problems they understand and don't understand so that they can focus on that, rather than focusing on a single test question,” math department head Barbara Coughlin said.

The WHS math department is readopting its policy of not allowing students to keep their graded assessments. However, a new resource is being adopted that will allow students to keep reflections about their tests and quizzes. These resources consist of either blue books or reflection sheets in which students can write about what they did and didn’t do well, as well as what skills they need to focus on.

“In terms of the reflection sheets, our hope is to shift student thinking from one that is focused very much about grades and points and that sort of stuff, and [to] ideas about learning,” math department head Barbara Coughlin said. “[This is] coming from sort of the standard-based grading that’s going on at the middle school.”

Coughlin, along with the rest of the math department, wants to emphasize the idea of giving students the opportunity to focus on improving skills rather than just specific test questions.

“We want to continue that idea of getting kids to think about what types of problems they understand and don’t understand so that they can focus on that, rather than focusing on a single test question,” Coughlin said.

Teachers in the math department are trying to set goals and help their students have a better experience when learning.

“The goal is always around elevating achievement,” Coughlin said. “So it’s about having students have a better experience in learning and how they are focusing their energy and attention, and what they’re working on and how they’re spending their time to be able to be better math students.”

Even though the math department is now distributing reflection sheets and blue books that students can keep, the actual math assessments are still re-collected after students review them and students are unable to keep them.

Some students are still frustrated with this policy being re-adopted and would like the tests to be redistributed along with the reflection sheets.

“I am against using just the reflection books because I think it is hard to learn what you did wrong if you just have a few words on what the test was,” junior Armen Abrahamian said. “You don’t have the problems in front of you, so it’s hard to understand exactly what went wrong. It’s easier to understand that if you see step-by-step exactly what you did and you can very easily understand it compared to writing it down.”

Despite the fact that the math department still keeps the tests, Abrahamian believes the reflection books and sheets are better than nothing.

“I think it is an attempt to reconcile with the students even though I don’t think it is that functional and helpful, but it is better than nothing,” Abrahamian said. “I just don’t think it makes up for not giving back the tests.”

Like Abrahamian, junior Jett Peter still wishes that the math department would allow students to keep their math assessments. However, he is glad that the reflections count for something.

“I actually really hate how they don’t give the tests back because when it is multiple choice, I can look at what I answered but I don’t know what I did wrong,” junior Jett Peter said. “I like how you get a homework grade for doing the blue books, but I don’t like how we still don’t get our tests back.”

Math teachers are applying different methods of reflection in the classroom. The goal is to compare notes and observations in hopes of finding a significant way to improve students learning.

“Different teachers are doing different things,” Coughlin said. “So it’s new and we’re trying out different things and spending time, then comparing notes with each other. I think over the course of this year, we’ll probably be doing some adjusting and changing and figuring out what works best.”

Coughlin believes that some students have the wrong idea about learning from their tests and mistakes, and she hopes the new reflection books and sheets can shift student thinking, thus ridding the idea that if you can fix your mistake, you fully understand the skill.

“[Some students] get this sort of false idea that if you look at your test, and you got #5 wrong and you can sit down and fix your mistake, you think you’re all set and that you know everything,” Coughlin said. “Really, you made the mistake and you can fix it, but if you do it again, would you make a different mistake or the same mistake?”

Although the school year is less than two months in, Coughlin feels that there has been good progress in student thinking thus far and hopes it will continue to grow throughout this year and beyond.

“The idea of focusing on the skills in that way, and not going back to that specific problem, but let’s do five more of those different kinds of problems that I think so far feels like it’s working well,” Coughlin said.