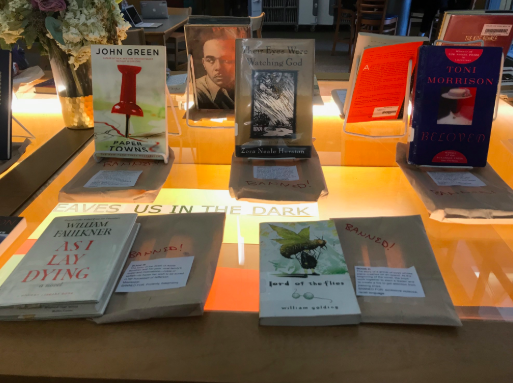 The books a part of the banned books display were wrapped in paper bags to hide their titles until until they were unveiled at the end of September. It is an annual tradition for the WHS Media Center to participate in Banned Books Week, an event organized by the American Library Association that celebrates the importance of reading freely and without censorship. “I think [students] are lucky in Wayland and Massachusetts to have such a wide variety of things they are able and encouraged to read either in class or for independent reading," Librarian Joanne Schmidt said.

The WHS Media Center regularly exhibits a book display at the front of the library. Traditionally, the Media Center participates in Banned Books Week during the month of September, an annual event organized by the American Library Association that celebrates the freedom to read.

While no books are banned at WHS, librarian Joanne Schmidt believes it’s still valuable to recognize the privilege of uncensored reading.

“I think it’s important that we celebrate our right to read what we want to read instead of having somebody else who doesn’t agree with our choices dictate to us what will be allowed to see on shelves and public places,” Schmidt said. “I think [students] are lucky in Wayland and Massachusetts to have such a wide variety of things they are able and encouraged to read, either in class or for independent reading.”

The display was designed by student-teacher Sheila McGovern, an addition to the WHS Media Center for the first semester of the school year. McGovern looked to online lists of challenged and banned books to choose which books to display. She decided to include not only classic books but also contemporary texts to show that banning books is still practiced in the United States today.

“This is not just a historical issue,” McGovern said. “This is a current issue, it is still happening today. This is very much an issue that is happening right now.”

There are two ways a book can be made illegal: a governing body can decide to ban a book, or a book can be challenged by a private citizen, and a committee will organized to decide if it should be banned.

McGovern thinks that the reason why no books have been banned at WHS or even challenged during Schmidt’s time in Wayland is because WPS has its own challenge policy, which requires the challenger to read the entire book. This often deters adults from going through the process and results in many challenges failing.

“In a place that has a policy like Wayland, it’s really hard [to ban a book],” McGovern said. “Usually, when a party says this book should not be there, it’s kind of a knee-jerk reaction.”

“I feel like by banning a book, you may be inadvertently encouraging people to want to read it more,” Flórez said. “That it makes the book more enticing and makes it seem like forbidden fruit, and they want to find out why the book has been banned in the first place. So it might have the opposite of the intended effect.”

All of the books in the WHS library are chosen solely by Schmidt, who realizes that when deciding what to put on the shelves, she has to be aware of the library’s audience and keep an open mind.

“There’s already some collection development, deciding which books to buy and which books to weed,” Schmidt said. “But, it really, in technical terms, could be a little bit of censorship, because I have to think about how I’m not one person buying books – I’m trying to buy books that will appeal to everybody.”