Artist of the Month: Sam Baron 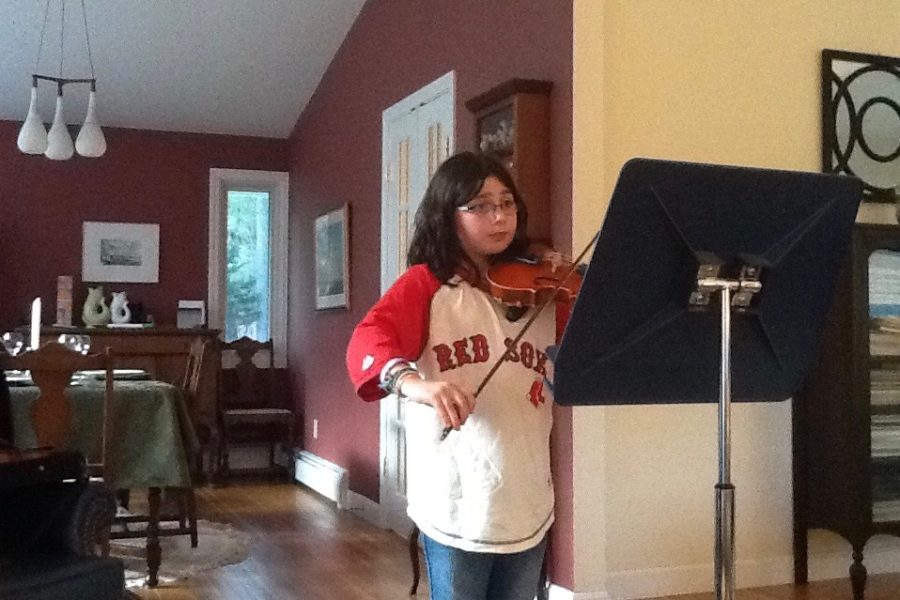 Young Sam Baron practices the viola. “My favorite part about playing the viola is that it is different," Baron said.

While many kids in Wayland choose to pick up an instrument at some point during their career as a student, very few continue playing on the high school level, for it brings about a certain level of commitment.

Senior Sam Baron has played the viola since she was in third grade, which in Wayland, is the first year students are able to begin practicing a string instrument as a school elective. While many students drop the instrument soon after playing in third grade, there are a select few who decide to continue playing in middle school and then on to high school.

“I started playing in third grade, and I thought it was pretty cool because I was like ‘Wow, I am playing an instrument.’ But then as time went on, my parents started pushing me more to practice, so I got a private teacher in fourth grade who was recommended by [WMS and elementary orchestra conductor Whitney] Tandon. I am actually [taught by Chris] Memoli, as in [WPS Fine Arts Director Susan] Memoli’s husband. I’ve been taking lessons with him ever since,” Baron said.

Baron has a strong commitment to playing the viola as she doesn’t only practice when it is necessary. Although she is currently recovering from having an inflamed cyst in her wrist removed, which arose due to over-playing the viola, she plans on getting back on her feet soon.

“I practice the viola pretty much every single day,” Baron said. “I just had surgery in the beginning of the year due to playing. [Because of surgery], I haven’t been practicing that much, but I generally practice about an hour a day after school, except for on Fridays [when] I have orchestra after school for two hours. I also generally have orchestra in school for one hour [every day].”

Baron didn’t stop there, for she has joined numerous ensembles since elementary school. Baron began auditioning and joining ensembles that were outside of Wayland at as young as fifth grade. Baron has been a part of the Rivers Youth Orchestra program since fifth grade.

“My favorite ensemble I am a part of is the Rivers Youth Symphony Orchestra outside of school,” Baron said. “It is a really high-level group, and we play original music from composers that are really famous, such as Beethoven, Bach or Shostakovich. [The orchestra] sounds really good – it is a lot of work, but it is something I have been committed to for a while.”

Baron doesn’t only love the viola for the musical aspect. She is also thankful for the people she has met through the viola.

“I like playing in an orchestra,” Baron said. “[I’ve met] a lot of interesting people you wouldn’t have the opportunity to meet because the Rivers Youth Symphony has kids from out of town, so there are a lot of people I wouldn’t meet if it wasn’t for the viola.”

For Baron, playing an instrument isn’t always fun and relaxing. She has found herself in stressful situations because of the auditioning process, which is a big part of playing the viola at such a competitive level.

“I was a sophomore, and I had my Senior Districts audition,” Baron said. “I walked into the audition and messed up the first two notes of the scale, and then I had a panic attack. I couldn’t breathe, and I was crying. The judge had to look at me from [behind] the blind audition [partition], and it was really awkward, and all the conductors were making fun of me. But I still made it, and I wasn’t last chair.”

Baron doesn’t allow the bad moments to bother her too much, for the viola is a huge part of her life. Baron will always have a passion and love for the viola, stressful auditions aside.

“My favorite part about playing the viola is that it is different,” Baron said. “No one really plays the viola. It is probably the most unique string instrument, maybe the bass is the second. I don’t know, I just think it’s my thing that I have grown to become good at, and it is always going to be something that is important to me.”