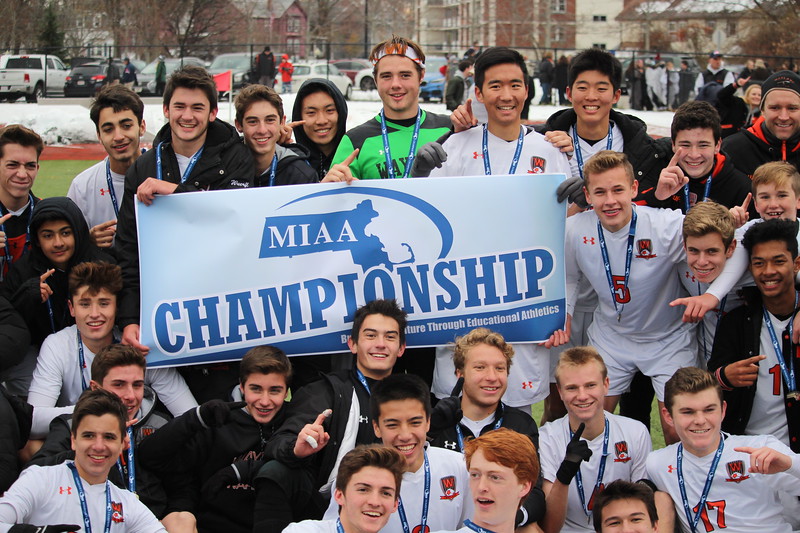 With the regular season over, the fall sports playoff season is underway and teams are preparing for the most important part of their season.

As the winter season approaches, the fall sports teams wrap up their regular season, and some have their postseason underway. While some of the fall teams may not have qualified for the playoff season, for Wayland’s boys and girls soccer, field hockey, cross country, girls volleyball, football and crew teams, they still have a long way ahead of them.

“Our season is going okay,” junior Nick Urato said. “We had a bit of a low last game [against Boston Latin], but we’re coming back strong now. Most of our season has been pretty good otherwise. We’re a pretty young team so we’re just kind of getting our chemistry up, and things are moving in a positive direction so things should be good.”

How are you preparing for the upcoming playoff season?

“We’re preparing well by just working hard, trying to win these last few games that we have, and trying to just stay consistent,” Urato said. “We’ve had a lot of injuries on our team, so we’re trying to get everyone in that consistent mode. It’s hard to deal with injuries but we’re just [trying] to have everyone be prepared for anything.”

With a track record of success, the girls varsity soccer team hopes to continue its trend of being DCL Small champions and making a good playoff run. After losing to Swampscott in the first round last season, the athletes are hopeful for success.

“Our season went pretty well,” sophomore Sophie Ellenbogen said. “We only had a couple losses and a lot of ties. I thought [the regular season] was good. We’ve improved a lot this season and [are] on our way to being DCL Small champs.”

Over the past few seasons, the girls varsity volleyball team has experienced improvement. With last season being the team’s first playoff run in years, the 18th seeded team is hopeful for a good playoff run this season.

“Beating Bedford on our senior night [was a big accomplishment] because we had to beat them to make playoffs and we came back from a really low first set and managed to beat them in the next three in a row,” volleyball player senior Shae Hanlon said. “We came together as a team that night.”

2019 has been an outlier year for the Wayland football program. On the first game of the season, Wayland defeated the Hopkinton 23-20, which was their first win over the Hillers since 2015. Unfortunately for the Warriors, Bedford dropped Wayland off their schedule late in the summer, giving them a bye week.

“It’s been a season full of obstacles and first times, and hopefully we can keep that trend going in a good way,” senior captain Cam Jones said.

The team awaits the postseason with the playoff bracket set to release on Oct. 27.

“Going into the season, one of our main goals was to secure a home game for the playoffs,” said Jones.  “With the way things have worked out, that isn’t as realistic anymore, so we know we are going to be going out on the road again, but we’ve been doing it all season, so we’ve been mentally preparing for that.”

The team’s first playoff game has been scheduled against Wakefield, who boasts a record of 4-3, at Weston High School this Saturday at 3 p.m.

With the regular season over, both the boys and girls varsity cross country teams are gearing up for their postseason events.

“So far this season, I think the team has done really well,” girls captain McKenna Kelemanik said. “I know the boys varsity team this year has done really well, they’ve won a bunch of meets. For the girls team, we’ve also done well – we beat Waltham this year, which is an improvement from last year. We got a new training program this summer, and a lot of people really put the effort in to train.”

Both the boys and girls teams qualified for DCL Championships for both the DCL Small and Large on Friday, Oct. 25
All Division IV schools will race in “Divisionals” in early November
The team and/or individuals will have the opportunity to qualify for All-State

For the first time since 2015, the field hockey team is back in the Division II playoffs and is excited for the state tournament.

“Overall, the season has been pretty good,” senior captain Arden Knapp said. “We started off strong, had a little bump and then got back on track. We qualified for playoffs right away, which was so exciting. After an intense team discussion and a big wake up call, we realized how important doing well in the playoffs is.”

What has it been like having three boys on the field hockey team?

“The team dynamic is very different with three boys playing,” Knapp said. “We have a lot of forces working against us. We have angry coaches on opposing teams, rude parents who have gone out of their way to put down and attack our boys, and refs who are biased against us. They’re all great guys who love the sport and love the team. They’ve definitely helped remind people that we are a talented team and have the ability to go really far.”

What is it like making the playoffs for the first time in your high school career?

“Making playoffs is so exciting,” Knapp said. “When we won the game that got us in [against Weston], I felt like I had just won the lottery. [Senior captain] Fatma [Sayeh] and I have been on the team since we were sophomores, and we have been through it all: not winning a game all season to winning two games to qualifying for the tournament. As captains, Fatma and I decided that we needed to turn the program around and start winning like it used to.”

“The regular season went pretty well. We had a few setbacks that affected us, but we did our best to work around them and have the best season that we could,” senior captain LJ DiCarlo said.

What is your playoff situation?

“We [had] states on Sunday, Oct. 27, and we’re trying to win the points trophy, which is equivalent to winning the state championship,” DiCarlo said. “It’ll take a combined effort on the boys and girls side, but I believe we can pull it off.”